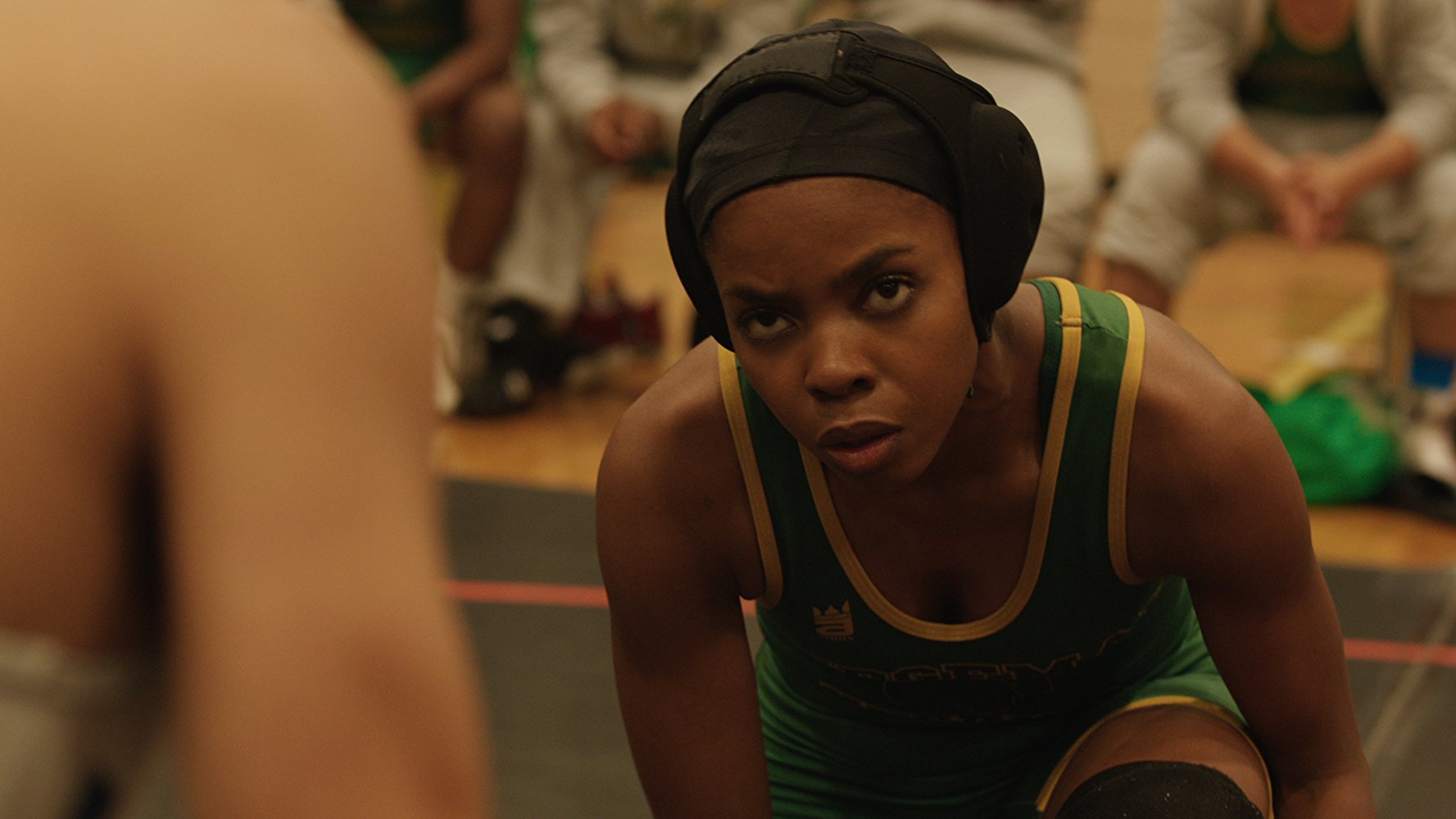 Facing the harsh realities of life in the foster care system, 15 Monique (newcomer Elvire Emanuelle) finds a place to take out her aggression and support system when she joins her high school wrestling team. The only girl in a team of guys, she slowly finds her sense of place while winning matches and reconnecting with her long absent father (Yahya Abdul-Mateen II). Building off her award winning short film, Olivia Newman has found an original and inspiring coming-of-age story with her debut feature First Match. A vérité style narrative featuring professional and non-professional actors, and produced with a crew made up largely of women, Newman offers a new take on the sports film which wisely avoids sentimentality and melodrama.

Lesley Coffin: I wanted to ask about the origins of this story. I didn’t know anything about gender non-specific wrestling teams. How did you find the story?

Olivia Newman: I was at Columbia Graduate School and working for a documentary distribution company called Women Make Movies. And one of the documentaries we distributed was called Girl Wrestler. And that film was about a middle school girl in Texas who was really good and made it all the way to state. But in Texas, there is a law against co-ed full contact sports in high school. So this film traced her last year of competitive wrestling. There just weren’t enough girls in the sport to guarantee she’d have someone to compete against at every school match. So that was a film which really exposed me to this topic, and that’s when I started to do a lot more research. Since 2007, there’s been a growing number of girls joining the sport but competing against guys because there weren’t enough female competitors to form their own teams. So I started looking for girls, especially in New York City, who had made that choice.

Lesley Coffin: And it’s interesting that the film doesn’t go with what has been a bit of a trope in sports films, even if it’s factual, to focus on the guys resistance to having a girl on the team. They accept her really quickly.

Olivia Newman: I made a short film which this film evolved into. And at that point, I was most interested in focusing on the dynamics when a girl joins a boys’ team. And I went out to talk with some girls who were competing, about three dozen in New York. I met with all of them, talked to their parents, their coaches, their teammates. And I expected that trope to be true and I’d be telling a story about these girls having to overcome prejudice and sexism from their own teammates. And there were some stories like that, but for the most part the girls told me that when they first joined the team the guys weren’t particularly excited, but once the girls proved themselves to be athletes, all that dropped away. And they were accepted just as fellow teammates. I can’t tell you the number of times they said “these guys are like my brothers.” So I felt I needed to be honest and show their truth, not shape it to be the story I thought it would be. Monique is inspired by a young woman who was living in foster care. And she could be very flirtatious and sexy, she’s this very beautiful young woman, but she could also show this other side of herself which was very competitive and loved wrestling. And she called her teammates her brothers, and I wanted to capture that dichotomy she represents and show that even if there is an initial bias, it might not last forever.

Lesley Coffin: How did you find Elvire Emanuelle for the role of Monique? I know you cast professional and non-professional actors, but she really is a discovery.

Olivia Newman: Yeah, I knew that she’d be the hardest role to cast because if I didn’t find the right person, I wouldn’t have a movie. I needed an actress who could play the role authentically and show the range of emotions Mo goes through. She needed to be extremely athlete and be trained in a very short time, and I needed to find all that in a teenager. So we did a nationwide search, we did street casting, and I auditioned actual wrestlers. And Elvire self-submitted through a website called Actors Access, and that isn’t a website most casting directors use, especially to cast big roles. But we were concerned about missing anyone with potential, and when I saw the tape I had this gut reaction. I thought this was Mo, but we had to figure out if she could learn to wrestle. So during our final callback we took our finalists through a training session and our trainer took me aside and said “this girl is a natural, I could teach her to wrestle in a week.” So that won her the role. And it was funny because she had grown up in Brooklyn but moved to Philly in grade school and then Florida for high school, so she’d just moved back to New York. And a few weeks before we started she asked for the address of the production office, because she wanted to walk around the neighborhood of Brownsville. And she called me as soon as she got off the train to tell me that was the neighborhood where she’d grown up. She used to walk her dad to that train station when he’d go to work. So it was the magic of movies that we ended up cast our Mo from Brownsville.

Lesley Coffin: The actor who plays Omar, Jharrel Jerome, had Moonlight already come out when you were casting or was he another unknown at the time?

Olivia Newman: He was unknown to us because Moonlight hadn’t come out yet. But my co-producer Veronica Nickel was one of the producers of Moonlight and right away she suggested we consider him for the role.

Lesley Coffin: I read in the film’s press notes that a majority of the crew was made up of women. Did you actively pursue that hiring practice or was that coincidence?

Olivia Newman: It was one of the film’s mandates when we were crewing up, to hire as many women and people of color as possible. That was an issue we felt very strongly about, so anytime we saw a list of candidates we made sure there were women and people of color on the list as well. I wouldn’t hire someone just because they’re a woman, but I always wanted to make sure that I was considering women as well as men. And I feel that I found the most amazing crew, which just happened to be over 60 percent women. Often what happens is, the lists are made up of people who’ve worked on films which did well on the festival circuit. And because there are more men working, the lists are dominated by men. But women are just as good, they just might not have been given the experience or worked on as high profile of films. So it takes more work to find female candidates, you have to dig a little deeper, but it’s worth it. And it was very, very important to have a female DP on this film because this is the story of a young women. And I wanted to make sure Elvire felt safe going to those vulnerable places, and I think it helps to have women behind the camera as well.

Lesley Coffin: Why make the decision to focus on a story between a father and daughter, rather than a mother and a daughter?

Olivia Newman: The short was about a girl trying very hard to get her father’s approval through wrestling. And in the short the lead character wasn’t in foster care, she lived with her single father who worked the night shift. And wrestling was a sport he had been into in high school. So there was a time when the mother was involved, and her father was okay with her wrestling but her mother wasn’t. And I ended up wanting to focus on the father-daughter dynamics. Interviewing these young women, it was interesting to hear how involved fathers were in their daughters’ wrestling careers. It was often a sport they loved or had competed in, and they were so excited to see their daughters involved in a sport few girls compete in. Despite all of Darrell’s flaws, he is the most progressive and encouraging person in Mo’s life. 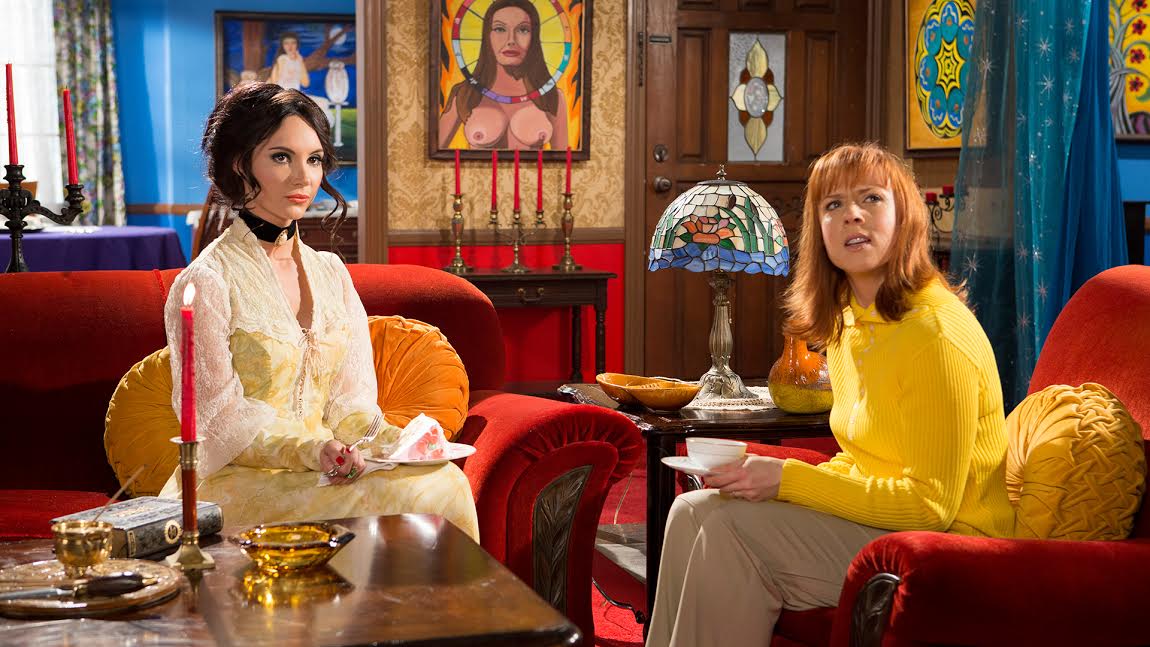 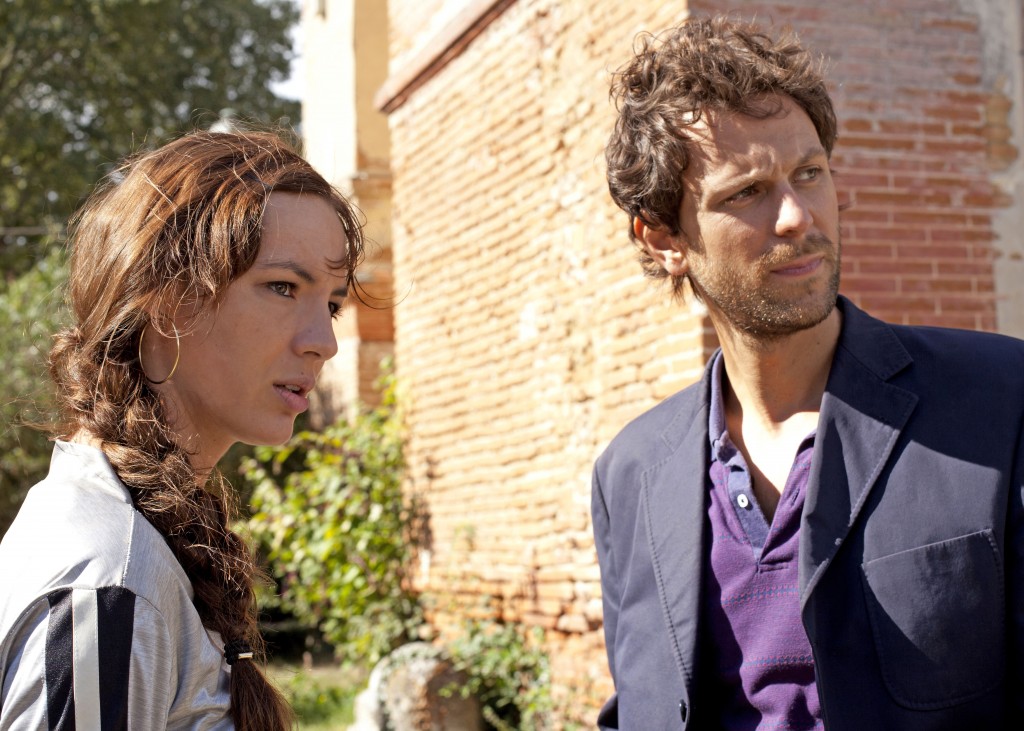