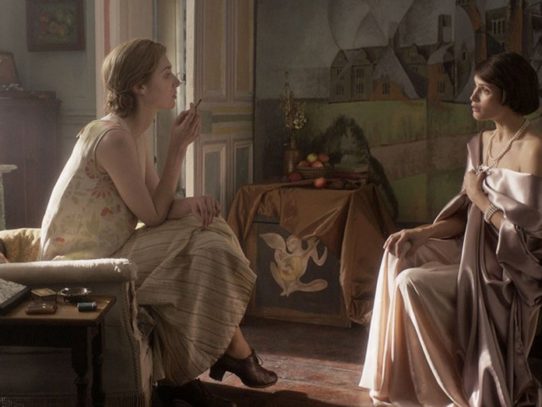 Almost a century ago, Virginia Woolf skyrocketed to fame with her iconic novel Orlando, and has remained one of the key figures in English literature ever since. Her contributions as one of the premiere modernist authors of her time has made her novels vital classics still studied and enjoyed today. But her name was relatively unknown when she met Vita Sackville-West, a successful and famous artist who wrote novels and poems, was a journalist and photographer, and garden designer. But she would best remembered in time as an iconic muse, the inspiration for her Virginia Woolf’s Orlando (her first hit), her essence captured by her lover and friend. Theater turned film director Chanya Button (who co-wrote the screenplay with Eileen Atkins) brings that story to life with stars Gemma Arterton and Elizabeth Debicki in her new film Vita & Virginia, documenting their complex relationship.

Lesley Coffin: What did you know about the story of Vita and Virginia? What was your starting point?

Chanya Button: I knew Virginia’s literature very well, I read her at University and she’d always been my favorite writer. But I knew very little about her personal life. But I loved the novel Orlando, so the opportunity to learn about Vita and Virginia’s relationship really excited me. The fact that this was the relationship which inspired such a remarkable book. That really motivated me.

Lesley Coffin: One of the interesting things about this story is Vita is well-known and Virginia is more obscure, but of course history has reversed those two figures.

Chanya Button: I certainly found that aspect to be interesting. Vita was a best selling author at the time and Virginia was more avant garde and time. The unexpected thing was that they even had a relationship and the impact that kind of power dynamic has on a relationship. It’s fascinating that Vita inspired a novel which ultimately changed Virginia’s status and was a turning point for her. It outsold all her novels and put her on the map. It’s an amazing example of how the personal and professional can sometimes intersect.

Lesley Coffin: I didn’t know Vita’s work the way I know Virginia’s, so her writing’s brand new to me with this film. Did you have to familiarize yourself with her writing before making the film?

Chanya Button: I knew of some of her work, she was an amazing journalist and photographer and traveled more than any other female journalist of her time. She traveled with her husband who was a diplomate, photographing women in the middle east. So her work as an artist was prolific, but working on the film I found myself learning more and becoming more and more fascinated with her work. She was a notorious lover who was also this remarkable poet, artist, photographer, journalist, and revolutionized how we looked at horticulture.

Lesley Coffin: There is mention in the film that Virginia is creating a new kind of biography with Orlando, and this is a biopic, but a non-traditional one. Did you use Orlando as an inspiration of how to approach the genre?

Chanya Button: I do. Virginia takes a very impressionistic approach with Orlando, and the film is about the backstory of that book, so I think I tried to use that as inspiration. This is our take on their lives, an impressionistic take on their lives as such progressive women for their times. Virginia could have written a straightforward biography about Vita Sackville-West if she wanted to, but she didn’t, she wrote an impressionistic, satirical novel about a man changing into a woman and lives for hundreds of years inspired by Vita.

Lesley Coffin: The film doesn’t just look at Vita and Virginia’s relationship in a vacuum but addresses the marriages they had to men who were supportive of their artistic careers but also gave them a freedom few women had at that time. Why was it important to show that part of their lives and those relationships?

Chanya Button: Early on we were talking about the fact that this was a film about a community of people who didn’t say no to one another. They just let each other live their lives. And these are adult relationships in which people have found their own definitions of marriage and partnership which isn’t dictated by society. In films we’re so used to focusing on new relationship, so it was interesting for me to focus on long term relationships and how they can work. I thought we were making a film about women rebelling about the conventions of their times, but these were men they really cared for and loved and made their marriages work for them. Virginia particularly really relied on her husband’s unconditional love and support.

Lesley Coffin: How did your collaboration with Eileen Atkins come about?

Chanya Button: Eileen wrote a play called Vita and Virginia in the early 90s and an early draft of the screenplay. And Eileen saw Gema in a play  and thought she would make an exceptional Vita. And Gema’s the one who brought the project to me. So that’s when I sat down with Eileen and tried to absorb everything she’d hoped for from the film, we spent more than a month together working and then she generously passed the baton on to me, like I was finishing a relay race. She really empowered me to make the film my own.