Here are the new films written and/or directed by women filmmakers now available at home as of 11/22/2019 (with links to FF2 Media reviews posted the week of their theatrical release):

Thematically speaking, what takes place on screen during the songs is honestly a great fit for Springsteen’s lyrics.  Take “Badlands” for example.  It’s a great fit for being the soundtrack to a job search with over 3 million Brits unemployed.

Who would have ever thought that a Pakistani Brit would have such an interest in the American Dream?  Certainly not me!  In any event, Javed finds himself listening to and singing along to the great New Jersey rabbi, Bruce Springsteen.  Okay, we know that Springsteen is not Jewish (Adam Sandler already told us!) and this film continually reminds us of the fact.

Credit to Chadha and casting director for the discoveries of both  Viveik Kalra and Nell Williams.  Both display a great amount of chemistry together.  Make no mistake that these two are going to have a bright future ahead of them.

Blinded by the Light has Bruce Springsteen’s blessing and rightfully so because it honors the great music he’s given us over several decades. 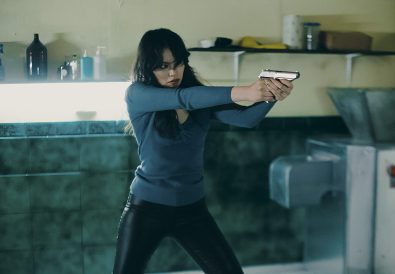