by Danielle Solzman
Interviews
No comments 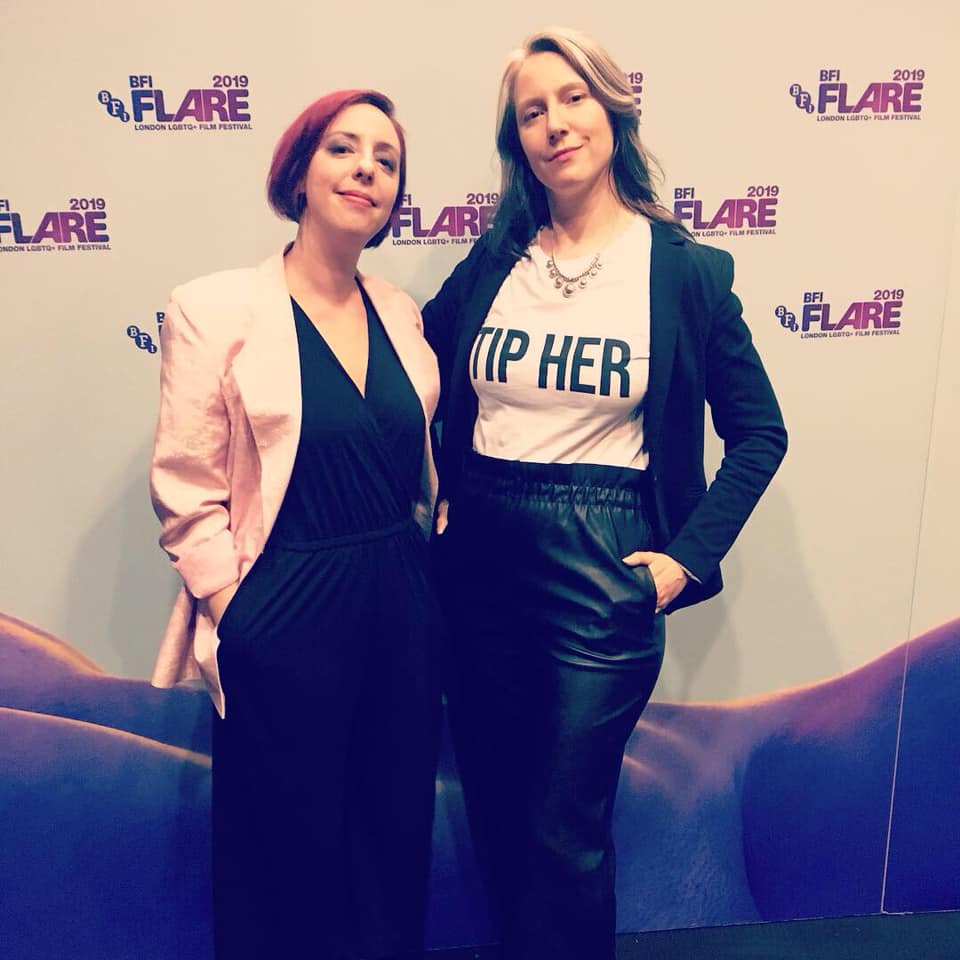 Co-writer/director Laura Madalinski and co-writer Kelly Haas spoke to FF2 Media about the recently released Two in the Bush: A Love Story.

Two in the Bush: A Love Story focuses on a type of relationship that is rarely depicted in film: the polyamourous relationship. The film is available on Digital and VOD today.

Two in the Bush: A Love Story is finally coming to home video following a run on the festival circuit. How excited are you that the film will now be seen by a wider audience?

Laura Madalinski: We are so very excited! We had an amazing festival run, we played in 26 film festivals, in 22 cities, 7 countries, and we won 6 awards. The audiences were so enthusiastic and supportive, and we just can’t wait to share this modern love story with the masses.

This is one of the few films I’ve seen to depict a polyamorous relationship. Can you talk about the writing process on the film?

Laura Madalinski: It originally started off as a web series about a bisexual, polyamorous woman navigating life and love. A lot of the inspiration came from my own experience. Then a friend suggested that I do a feature film instead. So I wrote the first draft of the script and loved it, but it was way too short to be a feature, so I wrote the second draft, but then I totally hated it.

Kelly Haas: Laura was talking to me about her challenges with the script and I was the one who suggested the structure of the plot. So she asked me to write it with her.

Laura Madalinski: Yes! It was Kelly’s idea to have Nikki and Ben be a pre-existing couple, which just made the whole story fall into place.

Kelly Haas: I’d never written a script before, but it was really fun to sit at our dining room table and go back and forth trying to make each other laugh and give each other “the feels” as we developed the characters.

Laura Madalinski: We really just wanted to create a love story for the queer, sex worker, and polyamorous communities because we need and deserve more love stories!

There’s been a push for diversity and inclusion in recent years. Do you feel like we’re seeing any results in mainstream cinema or does it feel like indie films are telling the stories?

Kelly Haas: I think we’re definitely seeing progress in mainstream cinema, but it’s still indie films that are making the most exciting work.

Laura Madalinski: I agree. What do you think the folks in charge of mainstream cinema should be doing to be more diverse and inclusive?

Kelly Haas: Pay marginalized people to tell their own stories.

How important was it to stay local as far as casting is concerned?

Laura Madalinski: First, I just want to give a shoutout to our wonderful casting director, Sarah Clark. Everyone at Compass Casting worked so hard to give us such an amazing, all-local cast. Sarah Mitchell, Travis Delgado, Caitlin Aase, Melissa DuPrey, every single member of our cast was fantastic. Secondly, Chicago will always be my home, and I really wanted this movie to showcase the profound talent in this city. So not just the cast was local, but also the crew, and all of our locations.

The film was shot for 10 days on a budget that was under $50,000. What was the most challenging aspect of the production?

Laura Madalinski: It was all pretty challenging! We actually only had about $25,000 for production, then about $15,000 for post, and the rest was used for film festival, marketing and distribution costs. All of the funding came from myself and my Co-Executive Producer / Director of Photography, Robert Stockwell. Still, even though we had very limited funds, we were able to make sure everyone was paid at least something and we were able to use SAG talent. We saved a lot of money by being meticulous in pre-production, as well as just being both creative and lucky. Creative in the sense that we used pretty much everything we had access to in regards to locations and wardrobe, and lucky in that everyone involved was passionate about the project and dedicated to making it the best that it could possibly be.

Kelly Haas: I was surprised that we were able to get Frankie to do what we wanted him to do.

In what ways does having an editing background help you as a director?

Laura Madalinski: It’s funny, while we were on set between takes, I would stare into space and imagine what we shot and how it would cut together. My cast and crew thought it was so cool, like some kind of superpower! Since we were on such a tight schedule, it was extremely helpful to know when we had enough coverage and were able to move on to the next scene. I highly recommend that every director do a lot of editing. You’ll save so much time on set!

What do you want people to take away from the film?

Kelly Haas: That everyone is worthy of love and that love can look like many different things. Opening yourself up to new forms of love can be challenging, but you can also grow as a person. We need more voices and more representation of what non-traditional relationships can look like.

Laura Madalinski: I really hope is that this film finds its way to the people who need it most. I hope that it echoes their experience, that it gives them hope for their own happy ending, and that it makes them feel less alone in the world. I want it to open up a conversation about relationship dynamics, specifically ethical non-monogamy and polyamory. I want it to make people think about how sex workers are portrayed in the media. I also want this film to encourage more filmmakers who have limited resources to go out and make their films.

What do you love the most about making a film in Chicago?

Kelly Haas: I love how many talented, hard-working, badass humans are in this city. Also, paletas in Humboldt Park.

Laura Madalinski: I love the Chicago indie film community. I love how many people wanted to help us out. The cast and crew, companies like Compass Casting which I mentioned earlier, Floodgates Audio which did our sound recording, Color Playground which did our color, Free Spirit Media which gave us PA recommendations. Locations like Reed’s Local, Logan Theater and Chicago Dungeon Rentals which gave us discounts to film there. Dimo’s Pizza, Kuma’s Corner, and Smack Dab Chicago which donated food to us. So many friends who offered their advice, guidance, talent and time. They say it takes a village to raise a child, and making a movie is no different.

Similarly, what do you feel that Chicago has to offer that one can’t get in LA, NY, or Vancouver?

Laura Madalinski: I’ve never been to Vancouver, but I know that the alleys in Chicago are WAY better for filming than the alleys in LA or NYC.

Kelly Haas: We absolutely have the best dive bars.

Laura Madalinski: Yes! Come to Chicago, visit our dive bars, make new friends, and then make movies with those friends!

by Danielle Solzman December 17, 2019
Danielle Solzman is a Chicago-based film critic and an aspiring filmmaker if she can ever put enough time aside to work on her feature-length trans-led political comedy script. When not in Chicago, she attends various film festivals such as Sundance, SXSW, Tribeca, and Toronto. She graduated from Northern Kentucky University with a BA in Public Relations while earning a Masters in Media Communications from Webster University after writing a thesis paper on comic books against the backdrop of the American political culture.
Previous Post Next Post