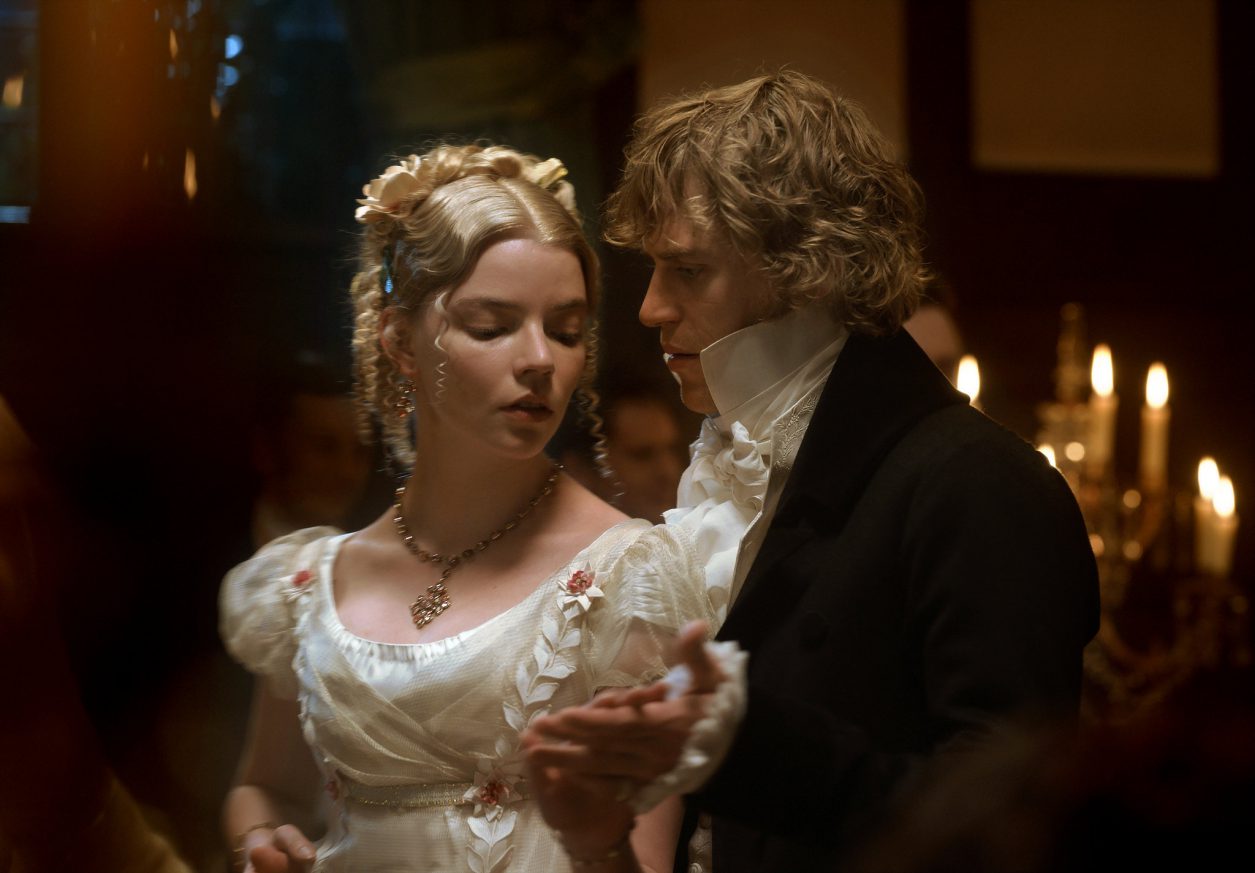 In celebration of Women’s History Month, the all-female team of film critics at FF2 Media were assigned to write about their favorite female artists – and where to watch their work. “Emma.” is now available to rent on Amazon Prime Video, YouTube, Google Play and AppleTV.

From Jane Austen’s Mr. Darcy to Emily Brontë’s Heathcliff, period drama heroes have a tendency to be brooding, quiet, and reserved. But the leading man that Autumn de Wilde presents in her new adaptation of Austen’s “Emma.,” is of a more sensitive sort. Johnny Flynn’s scruffy-haired, sea blue-eyed George Knightley has several emotional scenes in which his feelings for Anya Taylor-Joy’s Emma get the better of him. The titular heroine of “Emma.” is headstrong, high-spirited, and self-centered and for all that Knightley berates her for her faults, there is a gentleness to him. Flynn demonstrates that not all leading men have to be stoic.

Knightley is Austen’s most altruistic, inherently good hero and de Wilde does a great job of showing this throughout many small scenes in the film. He is kind to his housekeeper and to Emma’s elderly father, he enjoys walking and reading, and he is a close mentor to his tenant farmer, Robert Martin. He is concerned about Emma’s friendship with Harriet Smith and the effects it may have on both girls and he is legitimately distressed to find out that Emma has helped sever the blossoming relationship between Harriet and Robert. He sends his carriage for poorer neighbors to use and rescues Harriet when she is snubbed at a ball. For all that he isn’t afraid to call Emma out on her faults, he also always seeks reconciliation and it’s clear his desire is not to belittle her but to help her see the error of her ways.

Over the course of the film, we get to see Flynn’s Knightely realize that he is in love with Emma. There is a particular scene in which he and Emma dance together and he gazes at her longingly, almost messing up the formation of the dance because the two are too busy looking into each others’ eyes. His reactions to her are soft, but he’s clearly overwhelmed. Upon realization of his feelings, he literally runs after Emma’s carriage, throwing aside his own dignity in the wake of his emotions.

One of the most poignant scenes of the film sees Knightely stumble into a portrait gallery, shed his coat and vest, and lay down on the floor in agony. He’s unsure of how to process these emotions and they spill out of him. De Wilde allows the audience to see him in this state of uncertainty and vulnerability, making him seem softer and more human.

When he finally proposes to Emma, he is utterly wrecked and distraught. Though his words are eloquent, it’s far from the dignified proposals that often litter period dramas. Knightley’s emotions bubble over and he has actual tears in his eyes. The proposal doesn’t go particularly well — thanks to a nosebleed and Emma’s concern over Harriet — but he throws his arms up in the air in triumph at receiving a positive answer once Emma’s back is turned. It’s a gesture that makes him seem more youthful than he has the entire film. Even on his wedding day, Knightley has to wipe away tears, something I can’t ever remember seeing another romantic lead in a period drama do.

De Wilde certainly paints the softer, more in-touch-with-their-feelings Knightley and Robert Martin as being superior to the other possible romantic figures, Frank Churchill and Mr. Elton. Churchill and Elton are vain and deceitful, snubbing ladies of the town and hiding their true intentions. Both stand in contrast to Knightley who is a clear gentleman, kind to everyone of his acquaintance. Knightley is also willing to make a large sacrifice for Emma by agreeing to move into her family’s home with her to assuage her guilt about leaving her father behind to marry him. While this might not seem so extreme to a modern audience, this would have been somewhat unthinkable for a normal landowner in Regency England.

It is likely no coincidence that we receive one of the softest, most emotional period drama heroes from a film with a female director. Knightley is not as mild as Mr. Bingley (from “Pride and Prejudice”) or Edward Ferras (from “Sense and Sensibility”), but he’s also not as dignified and stern as Mr. Darcy or Mr. Rochester. There is much to be said about how toxic masculinity is reinforced even in the ideals that we present to women in things like period dramas, but “Emma.” does the opposite. It celebrates Knightley’s willingness to show his feelings and his sensitivity. Between Flynn’s beautiful performance and de Wilde’s brilliant vision, Knightley becomes a very different, kinder, softer leading man than you will find in almost any other period drama. 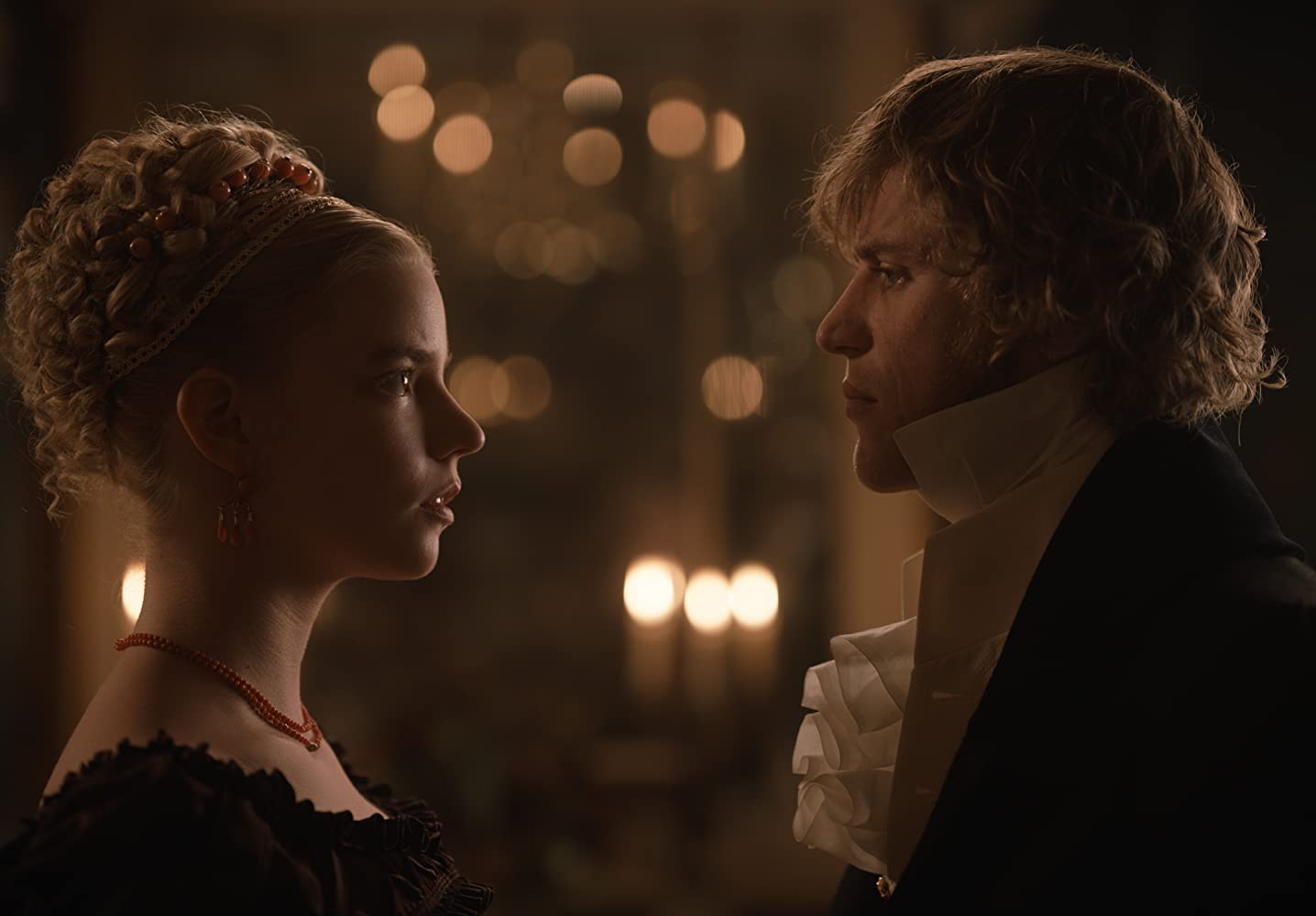 by Nicole Ackman March 29, 2020
Nicole Ackman is an FF2 Media Contributor based in North Carolina, after living in London and New York. She graduated from Elon University with a Bachelors degree in History and Strategic Communication and from City University of London with a Masters degree in Culture, Policy, and Management. She is a theatre and film critic and is a member of the North Carolina Film Critics Association. Her taste in film tends towards period dramas, movie musicals, and anything starring Saoirse Ronan. In addition to film, she is passionate about history, theatre, Disney parks, and classic novels by female writers.
Previous Post Next Post