As in most great hero’s journeys, all seems lost about two hours into the first installment of Peter Jackson’s epic fantasy trilogy The Lord of the Rings. Just when the titular Fellowship of the Ring made up of J. R. R. Tolkien’s richly-written characters feel out of the literal and proverbial woods, another obstacle presents itself. As a viewer, the onslaught of roadblocks keeping Frodo Baggins (Elijah Wood) and his friends from destroying the powerful One Ring begins to feel like too much: how much more will this group have to endure?

In the thick of a global pandemic where there are far more questions than answers, the formulaic hero’s journey is a comforting one. Dating back to the New Testament and The Odyssey, characters have been forced into journeys that feel endless and impossible – until they’re not.

Tolkien laid the framework with The Hobbit and Rings trilogy, followed later by Frank Herbert’s Dune and JK Rowling’s Harry Potter, to name a few massively successful examples. But in these and countless others, the good guys face seemingly endless obstacles to defeating evil, to winning the fight – a fitting feeling as humanity faces a strange, scary collective battle.

Though many stories utilize the familiar literary devices that come with a “quest,” few films do it better than The Lord of the Rings, whose third installment The Return of the King won the Academy Award for Best Picture and Best Director in 2004. The franchise won 17 Oscars, grossed nearly three billion dollars worldwide and defined a generation of fantasy filmmaking. 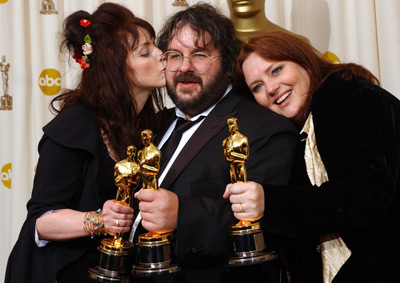 Screenwriters Phillippa Boyens and Fran Walsh won a Best Screenplay Oscar for adapting Tolkien’s dense work, expertly managing to create a narrative out of the prolific worlds built in the books and their predecessor, The Hobbit. [Boyens and Walsh penned all three prequel films, adding a much-needed female character due to the “evident and oppressive lack of feminine energy” in the novel, according to a 2012 New York Times interview.] The pair also co-wrote Mortal Engines, King Kong and The Lovely Bones.

While Jackson is often rightfully lauded for his innovative filmmaking using miniatures, forced perspective and stunning visual effects buoyed by their New Zealand backdrop, the screenwriters have the arguably more difficult job of taking undeniably dense and detailed source material and transforming it into something worth watching. Boyens told Creative Screenwriting that many moments in Tolkien’s sweeping novels are “inherently uncinematic,” forcing the adapters to get creative with the complicated plot lines that are easy to imagine on the page, but more difficult to display literally on screen.

The Lord of the Rings could have easily gotten lost in dogma and canon, sticking strictly to Tolkien’s intricate and mind-boggling world of wizards, hobbits, elves and dwarves, strange lands and other-worldly obstacles. But without a compelling narrative, cinematography, makeup and clever cinematic tricks wouldn’t amount to much. Even as it is, the films can drag and feel dreary for the less Tolkien-adept viewer, but the moments of levity, friendship and symbolism buoy it and keep it adventurous and entertaining.

Why reflect on The Lord of the Rings films almost 20 years after they were first released, and more than 60 after Tolkien first published the novels? In addition to numerous awards, critical acclaim and financial success, these trail-blazing adventure films serve as a reminder. As countries all over the world see an overwhelming loss of life and the ripple effect of suffering for the sick, the hungry, the unemployed, the elderly, and more, it is good to be reminded that this endless stream of obstacles won’t last forever.

We are all drowning in news about personal protective equipment, testing, protests, meat shortages, incompetent leaders and an endless stream of terrible news that somehow affects every family, no matter what the circumstances. Every person can relate to a member of the fellowship; and the end might feel nowhere in sight, but it will arrive eventually. And we can’t choose what will happen or how it will end, but we can choose how to get through it.

At his lowest, Frodo tells Gandalf (Ian McKellan), “I wish the Ring had never come to me. I wish none of this had happened.” To which the old man replies. “So do all who live to see such times, but that is not for them to decide. All we have to decide is what to do with the time that is given to us.” There is little we can do about this virus, which is part of what makes it so hard. The helplessness and fear can be overwhelming. But how we choose to respond to it is what we will remember.

That final act of The Fellowship of the Ring seems never-ending;  the men are chased, hunted and hurt. They must climb great mountains and defeat gross monsters – and that’s only the first story in the trilogy. But it’s those small moments of laughter and understanding between the characters, the times when they keep going, that remind us there are breaks in the pain, joy in the struggle, people who have our backs. Even people who seem like strangers.

Like the plight summoned by Tolkien’s imagination, our current crisis brings out people’s true colors, while also showing us who will be there for us when tough times arrive. It is teaching us that the best characters in a story are often the humble heroes, far braver than the more obvious leaders. Because it won’t be the legislation or the protests or the ignorance we’ll remember. It will be the people doing their best to make this go away. To make the time we’re forced to endure it more bearable for the kids, the elderly, the people who need it most.

The humble heroes, the quiet people just doing their jobs, who are leading us forward.  The Frodos, the Aragorns, the Samwise Gamgees; the people who do their part, quietly; who make each other better; who make the unforgiving journey easier to bear.