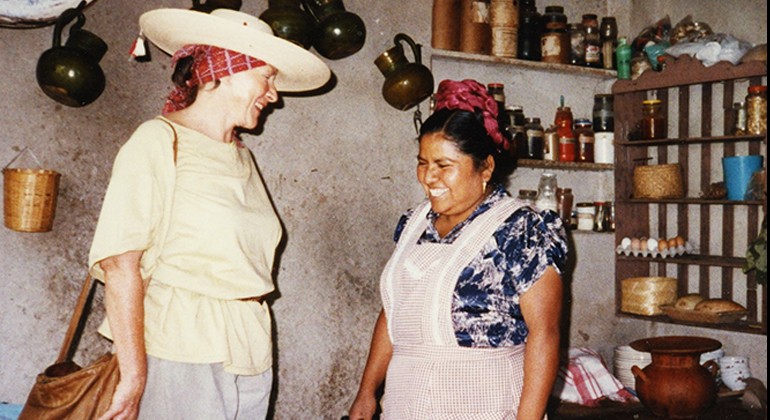 The documentary film Diana Kennedy: Nothing Fancy is one of the most unusual character studies as it makes you question why and how you had never heard of this woman before?  Chefs around the world know her, admire her, and learn from her, attesting that there’s no one who knows authentic Mexican regional cooking better than Diana Kennedy. Coined the “Mick Jagger of Mexico” among many other monikers, documentary filmmaker Elizabeth Carroll brings this British-born, award-winning culinary trailblazer’s life into clear focus.

Carroll cut her filmmaking teeth back in high school in Austin, TX, where much to her luck, she was absent the day a partner film project was assigned. Flying solo, she said, “…ended up being the best thing for me because I got to make all my own creative decisions.”  Having access to the CBS film archives, Carroll created an award-winning film that began paving the path for her future career.

Carroll, passionate about understanding and sharing the importance of local and organic foods, set out to get people’s attention about the topic by not only creating a film, but also creating Honeywater Films, a production company that focused on the marriage of food and film. Through her research, seated comfortably at a local Austin coffee shop, Carroll stumbled upon information about Kennedy, aghast at the fact that with her proficiency in Spanish and knowledge of Mexico, she had never heard of her. Determined to find and speak with Kennedy to include her among other Mexican food experts, Carroll hit a roadblock in finding no contact information. As she left the coffee shop and headed to a bookstore, she looked above where  the marquee announced the serendipitous message, “Book Signing with Diana Kennedy Tomorrow.”  Carroll exclaimed, “It was magical!”

Confirming with the bookstore owner that this crazy coincidence was going to happen, Carroll spent the next three hours composing the perfect email asking to interview Kennedy – and set out to attend the book signing. Walking through the doors, to her right, was Kennedy.  Carroll, who had studied how to interview and interact with Kennedy, said, “Hi Diana. I’m Elizabeth,” to which Kennedy responded, “Oh, yes! You’re the woman who wants to make a film about me.”  And that is how Carroll’s project became a revised one, a film about Kennedy, and one which as Carroll said, “It was [Kennedy’s] idea.”

Kennedy and Carroll have parallel lines of beginnings, both struggling to win over investors to believe in their projects. Carroll said, humbly, that she really can’t compare herself to Kennedy, but sees some similarities.  “In the beginning, I had a lot of passion and a lot of energy.  And I had this relationship, this connection, that was sort of inexplicably easy.  That’s the only part of this that was easy, connecting with Diana.”  She continued, “Thankfully, that connection was what opened a lot of the doors that I wouldn’t have been able to open on my own.  It took awhile.  I had to learn as I went how to ask for money and have a sense of legitimacy around my work.  It was humbling at first, but … we have something …that needs to be finished and people should pay attention.”

The similarities didn’t stop there.  Carroll personally identified with Kennedy in her “risk taking lifestyle” that proved to be a positive for Kennedy and presumably is for Carroll as well.  Carroll said, “I think the thing that really inspired me about her was her unwillingness to be anything but exactly herself … and the fact that she talks about her life in this way [that] it just all happened…”  Carroll called attention to Kennedy’s focus and selflessness as she has chosen to be a “feminist character in terms that she’s never followed any convention or stereotype” as this 90+ year-old could be sipping tea and eating crumpets in the English countryside, but she’s not.  She’s determined to not conform and continues “committing herself to a completely sustainable lifestyle in Mexico … I think it’s interesting that Diana still used her platform in her nineties to create the messages around climate change and that’s the most important thing to her above everything else.”

Carroll’s film and company fell into place, supporting Kennedy’s decades of work.  Using stories like Kennedy’s “as a prism to change someone’s mind…using a journalist approach” to tell the story is exactly the platform Carroll seeks. With the number of hours filmed, more than 120 including interviews with Kennedy’s friends, colleagues, Mexico itself, environmentalism, and all the cooking, Nothing Fancy could have easily been a five-hour movie, but Carroll said, “I think it was important to not try to do everything.  It’s not a movie about Mexican food and it’s not a movie about Mexico. It just happens to include those things pretty heavily.  It’s about her.  It’s a character study about this person.”  While a lot of the footage ended up on the proverbial cutting room floor, the end result is a concise and full portrait of a woman ahead of her time, but vitally important to our current time.

With food as the focus, Carroll sheepishly admitted that she really doesn’t cook, at least not until our recent quarantine times.  And one would assume that Carroll and the crew ate like kings and queens, but alas this was not the case. “She was really generous about making sure everyone was taken care of, but it was by no means,” speaking in a posh British accent, “‘Welcome to my home.’ It was more just sort of practical but her food was amazing.”  She added, “I think she viewed us as a crew, we’re the help.  We had a job to do and she was aware of that.  … We weren’t coming to Diana Kennedy’s At Home Restaurant.  She would call us in the morning at the bed and breakfast and [say], ‘Make sure you eat a big breakfast.  You know I’m not feeding you.  There’s not going to be any food around.’ Of course, Carroll and her crew always had more than they “had bargained for.”  But the most important question is, does Carroll put garlic in her guacamole, a big no-no for Kennedy.  Carroll laughed, “No!” And then she parenthetically said, “I did and then I met Diana and I would never!”

You can stream this deliciously entertaining and inspiring film on all major digital platforms. 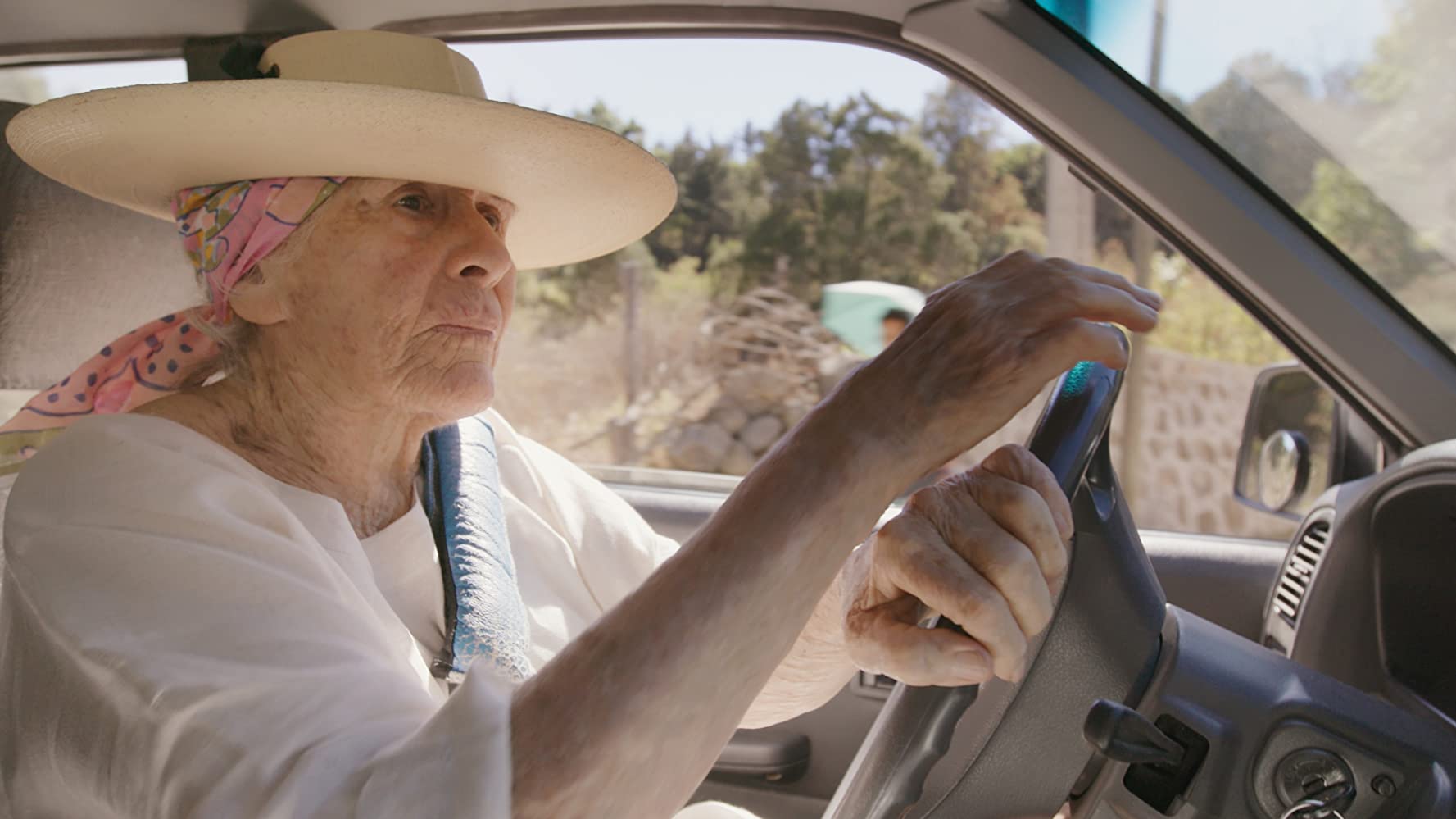 by Pamela Powell May 22, 2020
New York native film critic and film critic Pamela Powell now resides near Chicago, interviewing screenwriters and directors of big blockbusters and independent gems as an Associate for FF2 Media. With a graduate degree from Northwestern in Speech-Language Pathology, she has tailored her writing, observational, and evaluative skills to encompass all aspects of film. With a focus on women in film, Pamela also gravitates toward films that are eye-opening, educational, and entertaining with the hopes of making this world a better place.
Previous Post Next Post