It took my roommate about an hour and 30 minutes into Ovid and the Art of Love before he turned to me and said “Oh, that Ovid?!” Someone had just mentioned the Metamorphoses and something suddenly clicked. I said, “Yes, that Ovid.” In hindsight, my friend says that he was probably hitting his quarantine coping mechanisms a little too hard that night. In general, while the public probably doesn’t have much background knowledge of Ovid beyond the fact that he was an erotic poet who went on to write the Metamorphoses, this film helps people along with understanding the plot. The highly relevant themes and fun integration of modern style into the Roman Empire made Ovid and the Art of Love a savory food for thought in both style and content.

The stylized humor of the movie is meant to bring the viewer into a hybrid reality of our time period merged with that of ancient Rome. Mostly that happens through Ovid (Corbin Bleu) and the other characters telling classical Roman jokes while also using modern slang. The deal is basically the same as in a Shakespeare play, where it isn’t usually “ha-ha” funny but you can intellectually understand why someone from another time period would find it funny and basically just imagine them laughing for you. However, it does get kind of weird watching everyone in the movie laughing hysterically over Ovid comparing various body parts to swords, cow’s udders, et al. 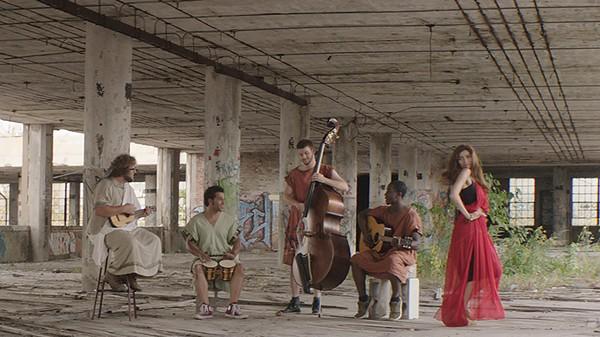 The film’s politics are also #relatable, as my roommate and I repeatedly said at various points in the story. The emperor of Rome is a dictator who is trying to impose regressively traditional social mores on Rome, shaming women who are unwilling to conform to their assigned gender roles and discouraging love affairs outside of marriage (#relatable). Ovid is basically like the guy in Footloose, getting people all thirsty for casual affairs while people are getting arrested and banished for it. In fact, at the end of the movie (not a spoiler if you know the history) Ovid was indeed banished from Rome, for the crime of being sexy. And also for joining a rebellion organized by the emperor’s granddaughter Julia the Younger, who you might also remember from high school history. Or I mean maybe not; we definitely didn’t.

As a framing device, the film uses a child in modern-day Detroit walking around his neighborhood reading “The Art of Love.” If you watched Wishbone on PBS, you might find it to be a familiar way of exploring classic literature, but in this movie it just made me wonder who gave this kid ancient Roman erotica. He’s like, ten. He also has no lines, and we’re pretty sure he didn’t have a name. So what gives exactly? It seems like this was put into the movie to give a reason for the blend of ancient and modern stylistic touches.

Finally, I shouldn’t leave out the performance that ties the whole thing together – Corbin Bleu, who looks different now than his High School Musical and Jump In days. While there are some stylistic bumps in the road with Ovid and the Art of Love, the overall concept is ambitious and interesting. The connections between the crumbling Roman Empire and today’s America makes it relevant as well, while the comedic focus on everyday absurdities that are constant from the ancient world up to now makes it fun. Watch this one with your quarantine buddies and you’ll certainly have a lot to talk about when you’re done.

Ovid and the Art of Love is now available on all major streaming and VOD platforms including Amazon, iTunes, Comcast, XFinity, Dish, Sling, Microsoft, Google Play, YouTube and many more.

by Giorgi Plys-Garzotto May 25, 2020
Contributing Editor Giorgi Plys-Garzotto is a journalist and copywriter living in Brooklyn. She's been thrilled to step into an editing role at FF2 after writing as a reviewer for years, so you may see her writing at the bottom of intern's posts as well as in her own pieces! She especially loves writing about queer issues, period pieces, and the technical aspects of films. Some of her favorite FF2 pieces she's written are her review of The Game Changers, her feature on Black Christmas, and her interview with the founders of the Athena Film Festival! You can also find more of her work on her website!
Previous Post Next Post