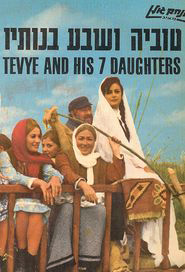 There is a good reason why Tuvia Vesheva Benotav (the Israeli version of Sholem Aleichem’s Tevye stories) is rarely seen. It doesn’t deserve to be. Although of great historical interest to Fiddler Fanatics like me, it is objectively awful and best kept apocryphal.

All too often, I sit in a movie theatre and ask myself: “What were they thinking?” But in this case it is perfectly clear. I know exactly what they were thinking. Sad to say, they were thinking this: “How do we cash in on the commercial success of Fiddler on the Roof?”

In Fiddler on the Roof, Tevye famously says he has five daughters–“I have five daughters!”–even though Sholem Aleichem lovers know that Tevye says he has seven daughters in the first of the eight stories that constitute the “novel” Tevye the Dairyman.

My own book Tevye’s Daughters: No Laughing Matter deals with this issue–from seven to five–in great detail, so suffice it to say that one can make a case for why five is actually the best number of daughters for Fiddler on the Roof…

But back to Tuvia Vesheva Benotav, I wouldn’t mind so much if Golan and his team had actually given the two “extra” daughters something to do. Quite to contrary, the fact is that they are pushed to the edge of the frame and not only not individuated, but actually dressed in identical costumes! The impression is that poor Tevye lives in a house overflowing with estrogen, because all of the daughters in his little house look like teenagers who are all roughly the same age. Maybe no one remembered to tell Sholem Aleichem that Golde actually gave birth to septuplets way back when?!?

But wait, Jan: You are being very strident about all this. What if you are wrong? What if the filmmakers started working on their Tevye long before Fiddler on the Roof arrived on Broadway? 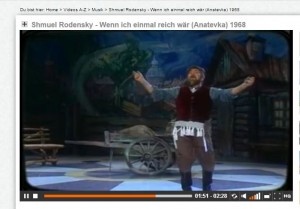 I promise you I am not wrong. One reason I am so sure is because the person they cast as Tevye–Shmuel Rodensky–is the same person who played Tevye in the Yiddish production of Fiddler on the Roof when opened in Israel in 1965. He also played Tevye in the German version of Fiddler on the Roof (which is called Anatevka for some reason known only in Germany). Here is Rodensky on YouTube singing “If I Were a Rich Man” auf Deutsch.

If you want to see it for yourself, here is a French website from which you can download Tuvia Vesheva Benotav, but I honestly do not recommended it. As the author of Tevye’s Daughters: No Laughing Matter as well as Diamond Fiddler: Lectures on Fiddler on the Roof (forthcoming), I had to see this film when it hit the 2015 KulturFest NYC schedule. But you don’t… not now and not ever!