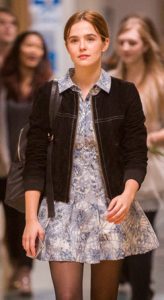 Directed by Ry Russo-Young, written for the screen by Maria Maggenti, and based on the novel by Lauren Oliver, Before I Fall is a female powerhouse: written, directed, and starred in by talented women. Before I Fall follows “Samantha Kingston” (Zoey Deutch) as she is forced to live her last day on repeat, struggling to find the meaning in that day and in her death, and how her actions can affect circumstances for someone else. (JEP: 4/5)

The Day is February 12th, and it starts out like any other. “Samantha Kingston” (Zoey Deutch) runs out the door in the morning, dismissing her parents and berating her little sister “Izzy” (Erica Tremblay) for touching her things. Her best friend “Lindsay Edgecomb” (Halston Sage) waits for her outside, and the pair drive to pick up “Ally Harris” (Cynthy Wu) and “Elody” (Medalion Rahimi) to complete their mean girls clique. The day is also one that marks a Valentine’s Day tradition at their high school, where girls are given roses from admirers, and the girl with the most at the end of the day is deemed most popular. The reigning queen? Lindsay.

The girls sit at their own table in the lunchroom, talking boys and gossip. The four of them above the fray, bullying those beneath them. When “Juliet Sykes” (Elena Kampouris) passes by their group to sit alone, Lindsay makes her comments and throws out insults, berating Juliet. All the girls play along, following Lindsay and relishing in their status. This is high school. And they are at the top of the social order.

Along with a dozen others, Samantha is given a rose from a secret admirer she knows to be “Kent McFuller” (Logan Miller), a childhood friend who she’s grown apart from in her rise to popularity. Kent is hosting a huge party at his house that night and everyone is invited, Samantha at the top of the list. But she blows off his request, uninterested until Lindsay demands that they go. 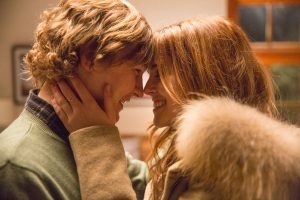 The girls are shocked when Juliet shows up at the party, and a confrontation between Juliet and Lindsay ensues, Samantha standing by doing nothing to stop the bullying. When the girls leave the party everything about that seemingly ordinary day changes. Driving home, listening to music, the girls’ car is struck, an accident rolling the vehicle. The next moment Samantha is back in her bed, woken in the morning by the same alarm as the day before. However, as events begin repeating themselves, Samantha finds herself repeating the same day over and over, unable to break the cycle. No matter the actions she changes, and new choices made, the same day continues on repeat. Samantha cycles through the emotions of hating the day to seeing the beauty in it that she missed the first few times around. Is this day her last? And if it is, what can she do to change the day for someone else?

Before I Fall succeeds in capturing audiences for its full hour and thirty-eight-minute run time even though the premise is based upon the same day repeating over and over again. Each time the day replays, there are slight changes as Samantha tries to break the pattern. Not having read the book, I was hesitant that the story would feel compelling, and the characters fully developed, for fear that they would be inherently stunted by the premise. But director Ry Russo-Young and screenwriter Maria Maggenti deliver a grounded film that captures the a certain truth to the trials of high school, and how the small things you say and do can have a lasting impact on someone’s life.

Top Photo: Samantha walking through the halls of her high school on February 12th.

Middle Photo: Samantha remembers what Kent used to mean to her.

Q: Does Before I Fall pass the Bechdel-Wallace Test?

Samantha and her friends talk about numerous things, only a few of them being boys. She also shares tender moments with her little sister as she relives the day, and in a culminating scene, Samantha and Juliet have a powerful conversation in the woods just minutes before the day resets.

I vividly remember closing Lauren Oliver’s novel Before I Fall when I was a freshman in college, walking to the dining hall for dinner, and looking around at my campus and the people on it completely differently. Oliver’s book filled me with emotion and hope, providing much-needed perspective on the importance of every day, and why what you say and do matters. It was the impetus for a lot of decisions I made after reading it (probably more than is healthy for a reader-novel relationship), so it’s safe to say I was eagerly anticipating this film.

Director Ry Russo-Young and screenwriter Maria Maggenti’s adaptation was an inspiring reminder, more than three years later, of why the book was so moving in the first place. Sam’s repeated journey through the same day resonates for the same reason Richard Curtis’ About Time (2013) does – both are about finding the tiny things throughout the day that make life so much more beautiful than we give it credit for.

Zoey Deutch’s performance is unexpectedly transformative – you could feel Sam’s outlook and perspective changing and expanding with each repetitive day. Sometimes the most important lessons we have to learn don’t come in big, explosive packages – they add up, day by day, moment by moment, with all the interactions and realizations we face.

Good movies with real-life implications make you hug your loved ones tighter. Before I Fall does this – and more. It’s about the importance of the small choices you make, the little memories that each day brings and how they contribute to the person you become. For me, this transcends plot lines, editing and cinematography that would make up a normal review – it’s moving and thoughtful in unexpected ways, making for a rare recommendation from me: read the book and see the movie. (GEP: 5/5)