Joseph Dorman’s wonderful new documentary Sholem Aleichem: Laughing in the Darkness opens at the Music Box Theatre in Andersonville and the Landmark Renaissance Place Cinema in Highland Park on Aug 26, but I predict it will be so popular that it will still be playing locally well after this September issue arrives in your mailbox.

Readers of this column already know how passionate I am on the subject of Fiddler on the Roof, so you won’t be surprised to hear that I actually flew to New York last January for the film’s world premiere. Since that time, Laughing in the Darkness has been embraced by audiences everywhere, quickly jumping from the Jewish film festival circuit to commercial theatres in urban centers all around the USA.

In a mere 95 minutes, Dorman does a superlative job of placing Solomon Rabinowitz’s work in historical context, masterfully combining a treasure trove of photos with scholarly reflections and readings from favorite stories by well-known actors such as Peter Riegert, all pulled together by a bouncy soundtrack from John Zorn.

But for all that, please forgive me one tiny kvetch: Laughing in the Darkness is a very male-oriented view of both “Sholem Aleichem” (as a writer) and Solomon Rabinowitz (as a man). Almost all of the “talking heads” Dorman interviews are men (with the sole exception of Ruth Wisse), very little attention is paid to Rabinowitz’s wife Olga and his large family (with its many daughters), and “Sheyne-Sheyndl” (wife of luftmensch “Menachem-Mendl”) is the only female character to get her own voice. Had Dorman included more women in his mix (maybe scholars like Anita Norich and/or translators like Aliza Shevrin), I’d be singing “Now I Have Everything.”

Fabulous visitors and beloved hometown favorites will fill the air with music this Fall.

The fun begins Labor Day Weekend, when Kfar presents Golem at Martyrs in Lincoln Square on Sept 3. On the evening of Sept 18, you can choose between the World Music Fest’s “Sephardic Showcase” (featuring Nuriya) on the Mayne Stage in Rogers Park, or ORT Chicago’s benefit at Viper Alley in Lincolnshire headlined by Robbie Fulks (from the Old Town School of Folk Music) that same night. On Oct 2, members of the Maxwell Street Klezmer Band will lead a Family Sing-along (for all ages) at a brunch sponsored by the Chicago YIVO Society at SPACE in Evanston.

Also Chicago a Capella has planned a splendid series of events to promote their new CD Days of Awe and Rejoicing, leading off with an afternoon Release Party at Spertus on Sept 18, followed by additional performances in Hyde Park (Sept 25), Evanston (Oct 15), Naperville (Oct 22), and Oak Park (Oct 16). 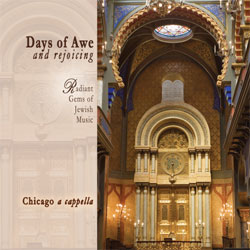 For complete details, visit my blog. If you miss any of these events, the CDs of all performers named are highly recommended. And if I’ve missed your event, then please send info and I’ll add it to my blog right away.

“It was because I had seen so much of injustice and domineering little groups, as well as heard the complaints of so many of the best people of the country, that I ventured as far as my position would allow and by historical analogy warned men as solemnly as possible against half-educated leaders being permitted to lead nations into war.”

This is a quote from Erik Larson’s follow-up to his best-seller The Devil in the White City. In this new book In the Garden of Beasts: Love, Terror and an American Family in Hitler’s Berlin (which is also a very good read), Larson follows the short-lived diplomatic career of William E. Dodd, a University of Chicago historian named Ambassador to Germany by Franklin Roosevelt in 1933. 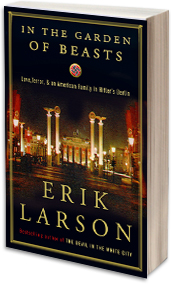 The quote comes from a letter Dodd wrote to his good friend Jane Addams (there she is again!) in which he explains a controversial speech he gave right after Hitler withdrew from the League of Nations. Pushback came not from the Nazis but from Americans (primarily in the State Department) who worried that Dodd’s comments might provoke the Germans into defaulting on their outstanding loans.

I missed Larson when he came to the Harold Washington Library Center last May, but I caught up with him recently on C-SPAN’s BookTV, and I’m very glad I did. To watch the broadcast online and/or order it on DVD, logon to http://www.booktv.org and enter “Larson” in the search field.