In March 2009, I received a screener from the coordinator of our annual Chicago Latino Film Festival for a new Argentinian feature called La Cámara Oscura. I was entranced by this film, and wrote very positive things about it in my April ’09 column. Soon after, I began receiving calls from all around the country, the word spread, and La Cámara Oscura has now become a major hit on the Jewish film festival circuit. To date, it has played in twenty-five American cities from Atlanta to Boston and from San Antonio to Sacramento, and it has also played at international festivals in Jerusalem as well as Cairo and Istanbul.

Based on a short story by well-known Argentinian-Jewish writer Angélica Gorodischer, La Cámara Oscura was written and directed by Maria Victoria Menis. Relying on superb visual style, Menis keeps dialogue to a minimum, enhancing her quiet tableaux with natural sounds as well as Yiddish songs and Klezmer tunes. La Cámara Oscura also has three animated sequences, the first taking us in to young girl’s imagination, and the others similar in style to the surrealistic dream sequences Salvador Dali designed for Alfred Hitchcock’s 1945 film Spellbound.

All programs in Chicago YIVO’s Summer Festival of Yiddish Culture are free and open to the public. For more information, visit www.ChicagoYivoBlog.com. 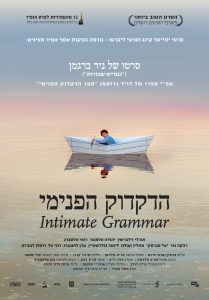 In 2002, Nir Bergman wrote and directed Broken Wings (Intimate Grammar, but when I watched it last Fall, I had a mixed reaction. So I watched the film again last month and then read David Grossman’s source novel The Book of Intimate Grammar.

The main character, Aharon, is an abnormally small teenage boy. Even though he is highly intelligent and has a lively imagination, Aharon seems unable to grow into the body of a mature man.

Intimate Grammar opens with newsreels from 1948 and then skips quickly ahead to the mid-60s. We learn that Aharon’s father is a Holocaust survivor, while his mother came of age during the austerity of Israel’s earliest years as a nation. Beautiful to look at but painful to watch, I fear Bergman’s efforts are ultimately stymied by Grossman’s heavy-handed metaphors.

Two screenings are scheduled: August 22 (6:30 PM) and August 25 (2:00 PM). Both screenings are in the Claudia Cassidy Theater on the second floor of the Chicago Cultural Center. All Cinema/Chicago screenings are also free and open to the public, but space is limited, so be sure to arrive early if you want a seat.

Like all of you, I am hoping for cooler weather come August, but if not, wonderful new DVD options are now available for home viewing. Footnote (from Israel) and In Darkness (from Poland), two of the five candidates for 2012’s Best Foreign Language Film Oscar, can be rented from Netflix and/or purchased from Amazon. Two additional films, The Debt and Gainsbourg: A Heroic Life (both of which also appeared on my “Best of 2011” list) are also available.

The Debt, starring Helene Mirren and Jessica Chastain, is director John Madden’s English language update of the Israeli film Ha Hov. Gainsbourg, a BioPic about French singer Serge Gainsbourg from his childhood in Nazi-occupied Paris through his peak of popularity as a ‘60s cultural icon, is a luminous first feature written and directed by French cartoonist Joann Sfar (best-known for his delightful series of children’s books about “The Rabbi’s Cat”).

Full reviews of The Debt and Footnote are available on the JUF Blog (www.juf.org), and mini- reviews of Gainsbourg and In Darkness can be found on my own Blog (www.SecondCityTziv.com). All four of these films are highly recommended!

by Jan Lisa Huttner August 15, 2012
Jan Lisa Huttner is a Brooklyn-based arts critic & feminist activist. She is the creative force behind the SWAN Movement—Support Women Artists Now—which has just begun its third phase as International SWANs® (aka iSWANs). In the Jewish world, Jan is best known as the author of two books on Fiddler on the Roof—Tevye’s Daughters and Diamond Fiddler—both of which flow from a strongly feminist POV. She also served as both story consultant and “talking head” on the award-winning documentary Fiddler: A Miracle of Miracles.
Previous Post Next Post