It’s Not Subtle! Below Her Mouth and the Heterosexual Gaze (Part 2 of 2)

by Giorgi Plys-Garzotto
News
No comments

This article is the second of a two-part series, so if you haven’t read the first part, click here

For those of you who for some reason only want to read the end of this article: in the previous installment of my meditation/ rant on the representation and construction of lesbian sexual identity in probably-straight director April Mullen’s new film Below Her Mouth, I talked about how the visual coding and characterization of the two romantic leads in the film maps onto straight romantic narratives in a pretty 1 to 1 way–that is to say, Mullen and Co. filmed a straight romance with two girls, with all the toxic patriarchal narratives that come along with a heterosexual romance.

If you’re reading an article critiquing gender roles in lesbian indie film, you probably already know what the male gaze is, but for Lithuanians reading this site to improve their English and alt-righters hate-reading this to rant about it on 4Chan later:

“The male gaze is the way in which the visual arts and literature depict the world and women from a masculine point of view, presenting women as objects of male pleasure.” –Wikipedia

The male gaze takes characters like Trinity and Black Widow and puts them in tight unwieldy outfits that would never work in the characters’ actual lives. It’s what causes women characters to generally act much more sexily and/or prettily than a human ever would, especially noticeable when they’re alone (do any of you look as camera-ready while you masturbate as Jasmine does?). Even outside of sexual scenes, it trims and plucks every aspect of women in media to be more palatable to the male viewer, because its fundamental assumption is that every aspect of a woman should be subject to male approval.

Just as the male gaze twists everything it sees to be more in line with patriarchy, the heterosexual gaze looks at two women dating and thinks, “how can I view this as being more like a man and a woman dating?” And that’s where films like Below Her Mouth come from. The fact that April Mullen has said in interviews that she is especially proud of the “female gaze” she has brought to this story makes this especially eyebrow raising.

Traditional heterosexual gender roles are based on the submission and exploitation of the feminine, to and by the masculine. Aka: they uphold partriarchy. This is crucial, because a dynamic like this is inherently violent. It designates one group of people as objects for another group to use. While queer theory has been deconstructing the male/ female binary for decades, we have yet to fully critique its close cousin the masculine/ feminine binary, even though the trappings of patriarchy from the male/ female binary are often copy-pasted onto it, leading to problems like the prioritization of butch women in queer spaces.

The reason it is butch women rather than femmes being prioritized here, and the reason there is prioritization at all, is because masculinity and femininity, at least in the unmodified/ uncritiqued version in which they appear in Below Her Mouth, play into the same abusive roles as the traditional male/ female ones, simply without specification of genitalia.

Dallas catcalling Jasmine is a better illustration than I could possibly have asked for: in becoming complicit in this patriarchal exercise of power, she is taking up the role of the oppressor. The act of catcalling is an act of misogyny because the assumptions you have to make about whether or not any random woman cares about your opinion on her appearance, and the lack of respect for her boundaries you need to have to force them on her, are incompatible with a view of that woman as your equal. Dallas sees Jasmine as an object to be used to assert her own masculine power, not a human being. Hey straight people! You realize it’s possible to be attracted to women without hating them, right?!?!

If the dominant masculine role is opened up to certain women, who can then dominate women in the feminine role, the only thing that’s changed is the biological requirements for admittance into the patriarchal elite. Instead of dismantling patriarchy, it only introduces a new method of coding who is important, and who is exploitable. The reason, then, that the heterosexual gaze is ripe to become prevalent in representations of LGBT people in media is not only that straight people have a hard time understanding relationships that don’t exist within binaries of oppression, but also because binary categorization gives one class of people license to exploit another, supporting the larger exploitations of the capitalist state.

Okay, so I’ve just taken an indie lesbian film, and made the claim that the gender expression of its characters helps capitalism to assimiliate lesbian culture into its larger narratives of exploitation and oppression. Maybe you don’t follow me up to that point. But what I said before still stands. And of course, if there weren’t such a dearth of good LGBT media, I wouldn’t be nearly so put off by toxic gender roles in just one film, but guess what—there is such a dearth. The scarcity of lesbian media of any quality means that every addition has a larger effect, in terms of what gets greenlighted by studios in the future, right down to what baby gays get turned on by for the first time. You know how people go insane for The L-Word and The 100? What kind of onscreen relationships do you want the next generation of women-loving-women to be influenced by?

By the way, if you feel like watching something awesome and lesbian, though, I recommend the show Steven Universe as a primer on how to portray complex relationships between women, in episode lengths of 10 minutes no less! It is your reward for reading over 2000 words of this article. Cheers! 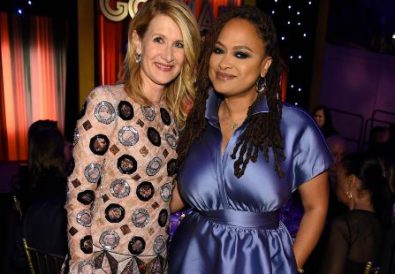