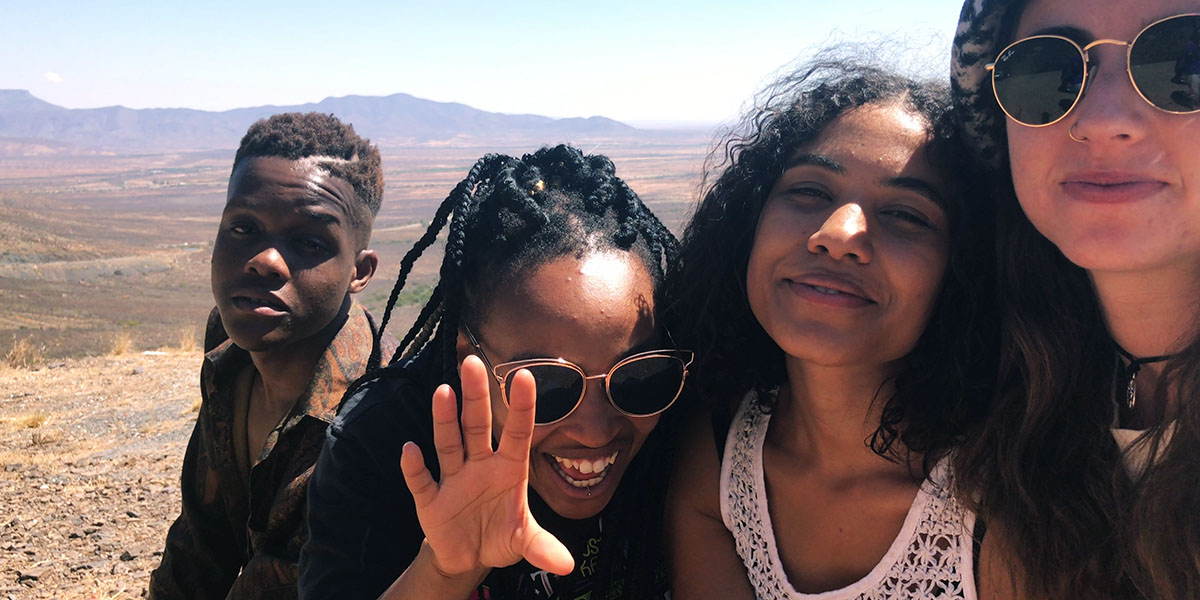 This unusual sci-fi/horror film addresses her home country’s racial issues as we witness a group of young friends camping and then awaken the next morning having swapped bodies.  We see these young adults and their preconceived notions about race and gender portrayed with great insight and at times, humor.

I had the pleasure of sitting down with Bass, the professionally trained magician-turned-filmmaker, to learn about how she found her actors and the hopes she has for her film.

Bass attended the Cape Town College of Magic (the only one in the world) for seven years and then went on to film school.  With a film degree in her pocket, Bass chuckled and thought she was “…now Francis Ford Coppola.”  She quickly learned that “…if you haven’t made a feature, it’s very hard for people to trust you to make [one].”  Her first feature, Love the One You Love, a micro budget film, was completely improvised with more than five and a half hours of footage and took a year to edit.  For High Fantasy, Bass changed things up by workshopping and scripting the story based on the casts member’s improvisations. “However,” she laughed, “70% was still improvised.”

Collaboration with her cast was imperative to Bass.  Her understanding of South Africa’s struggles accentuated her need to collaborate. “We have a bad history of appropriating stories, not giving people access to tell their own stories.  As a White filmmaker, it’s something I have to engage with quite directly.”  So she gave up her director’s complete control, “…realizing you’re not an expert on everything” and encouraged her actors to take the lead.  Bass felt that “…our product will be better if we collaborate than if we don’t.”  She continued, “There are moments in the film that I look at and I know that this would never be there if I’d took it upon myself to tell the story alone.”

Finding the right cast with no script in hand and creating the film proved to be what Bass termed “a giant social experiment.”  Actors auditioned by coming in and portraying someone they knew and then paired up with another actor.  They then had to swap roles, taking on the other person’s characteristics—exactly what happened in the film.  She found that her actors needed to be open minded yet able to discuss politics and show enthusiasm about collaborating on the project and script.  “It was a very interesting audition process!”

The film brings up insightful revelations about preconceived notions of both race and gender in this unique body swapping story, but Bass is most excited about the conversations it will spark after the credits roll. Bass said, “One of the questions that this film poses is how much have these people really learned from being in another person’s shoes. Thami (Nala Khumalo) definitely learns a lot from being a woman, but how much does…this affect his behavior once he’s back in his own body again?”

Bass shared that her country’s narrative is that they have now all accepted and understand one another, but the reality is not supportive of that statement.  She feels that her film shows that yes, they can all work together no matter the race, but reconciliation is still extremely difficult. She shared that her friends debate with her the value of conversation, but Bass said, “I believe that these conversations are cumulative…and at some point…you start acting differently.”

Bass knows there is a balance in filmmaking between stimulating thought and entertaining an audience.  “People want to be entertained, …but that doesn’t mean they don’t want to engage with what’s happening around them.  I think you can do both.”  Bass thoughtfully said,  “I think the film will make a lot of people uncomfortable, but I hope that happens in a way where they go home and think about why they feel uncomfortable.”

by Pamela Powell September 20, 2017
New York native film critic and film critic Pamela Powell now resides near Chicago, interviewing screenwriters and directors of big blockbusters and independent gems as an Associate for FF2 Media. With a graduate degree from Northwestern in Speech-Language Pathology, she has tailored her writing, observational, and evaluative skills to encompass all aspects of film. With a focus on women in film, Pamela also gravitates toward films that are eye-opening, educational, and entertaining with the hopes of making this world a better place.
Previous Post Next Post