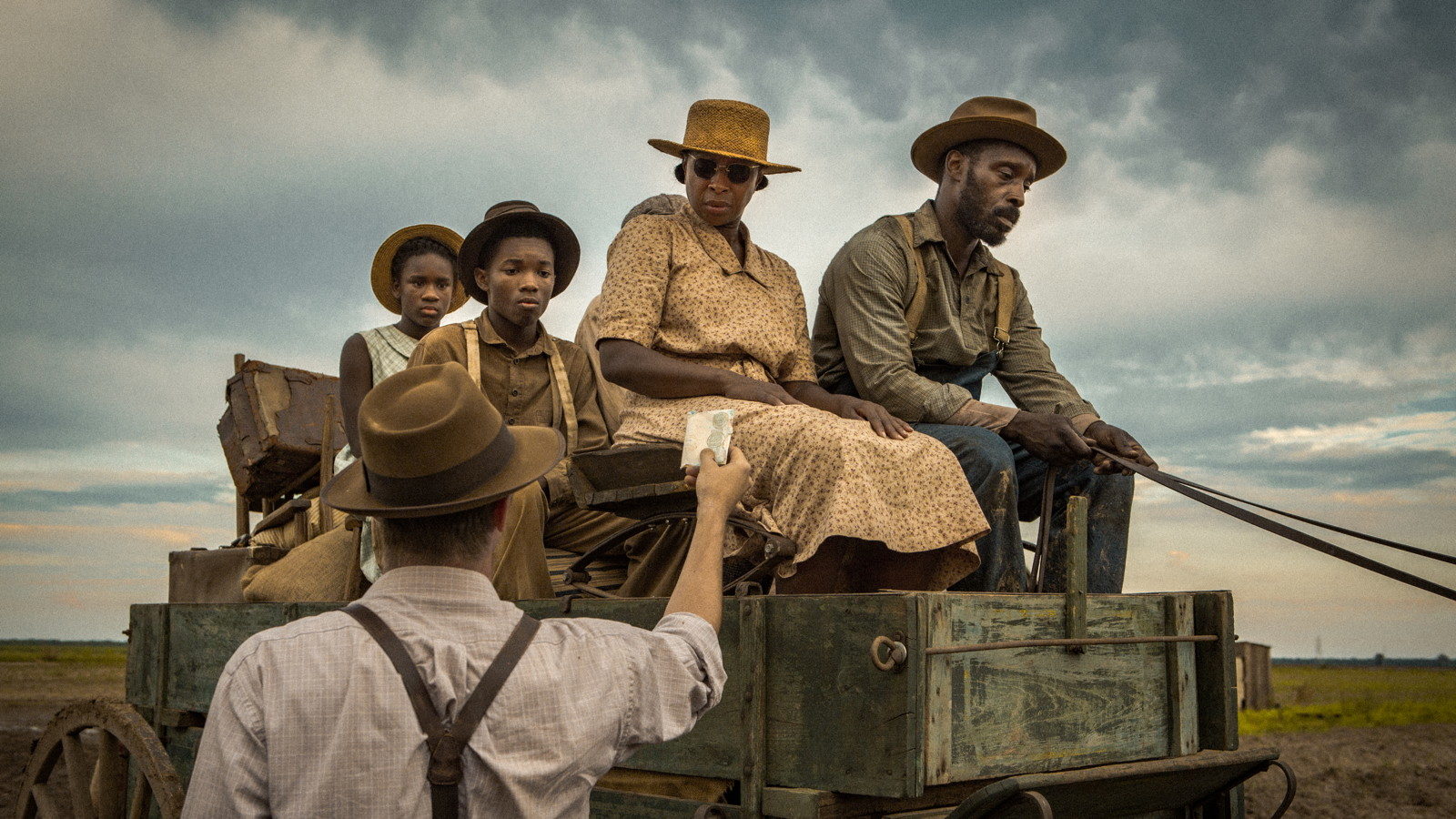 Given the prestigious imprimatur of the 55th New York Film Festival of the Film Society of Lincoln Center (which ran through September and October 2017) the features by the women directors were a diverse and challenging slate. Ranging from debut to valedictory work, most of these fiction and documentary features have American distribution and will be presented at other festivals. Here’s my take on the fiction features.

Director Dee Rees accomplishes a breathtaking tour de force with her third fiction feature.  She expands from stories of one African-American female to a bountiful epic of two families, black and white, in the American South during World War II.  Rees polishes Virgil Williams’s first adaptation of Hillary Jordan’s bestseller to create a classic with strong, indelible characters who are farming amidst the poverty, heat, rain, and, yes, mud of the Mississippi Delta.  She also thrillingly captures the fog of war and the inner turmoil of young heroes who leave these fields for European battles that replay in their nightmares when they return to a social landscape still mired in Jim Crow.  Each of the white landlords (played by Jason Clarke, Garrett Hedlund and Carey Mulligan) and the neighboring black sharecroppers (unrecognizable Mary J. Blige, Jason Mitchell and Rob Morgan) take a turn narrating their inner thoughts.  The white racist patriarch played by Jonathan Banks has no further depth beyond sparking the violent climax.

Rees focuses on key tandem relationships within the families of husbands/wives and fathers/sons and outside of them with the surprising cross-racial bonds between between the two wives and between the two veterans.  Their friendships propel the story forward to both redeeming and tragic consequences, with a more hopeful ending than the novel.  At the NY Film Festival press conference, Rees proudly credited her female creative team: Director of Photography Rachel Morrison; editor Mako Kamitsuna and score by Tamar-kali.  Though Rees expressed gratitude for the wide distribution by Netflix on November 17, try to see this on the big screen of a theater.  (NLM: 5/5)

Actress Greta Gerwig has been co-writing many of her starring vehicles since her mumble-core beginnings a decade ago.  Here, she debuts directing her long-gestating original script that smartly refreshes the rebellious teen girl movie, conveniently set in the post 9/11 but pre-social media world of 2002.  Christine McPherson (Saoirse Ronan) reaches senior year in Catholic high school caring more about being the “Lady Bird” she now wants to be than pleasing any Prince Charming or her mother.  Her mother Marion (Laurie Metcalf) is not the usual harpy nemesis, but is urgently trying to adjust to her daughter’s quicksilver adolescent changes before she leaves for college.  Gerwig’s working title was Mothers and Daughters, and this caring parent is a hardworking, empathetic nurse struggling with the financial and emotional difficulties of a laid-off husband (Tracy Letts).  Even as Lady Bird tries to fight, too, with her mother-figure at school, Lois Smith’s Sister Sarah Joan is surprisingly warm and understanding.

Grounded in Gerwig’s hometown Sacramento, California (also seen in another NYFF hit Griffin Dunne’s bio-doc of his aunt Joan Didion: The Center Will Not Hold), Lady Bird flies through familiar hurdles of wrong boys, mean girls and BFF betrayal with amusing twists and sensitive portrayals of class conflict.  She has to face her freshman experimental experiences head-on in order to take flight into the next phase of her life, with her mother as finally welcomed ballast in a sympathetic way that could appeal to teens and mothers.  A24 moved up theatrical release to November 3. (NLM: 5/5)

Polish director Agnieszka Holland is known for politically-conscious films that critically examine the impact on people of the changing authoritarians over Europe during the 20th century.  Collaborating to adapt Olga Tokarczuk’s novel Drive Your Plough Over the Bones of the Dead (not yet in English) and directing with her daughter Kasia Adamik, they powerfully capitalize on the superstitious perception of women being close in touch with nature to call out for environmentalism.

Holland teases that this is the U.S. premiere of her No Country For Old Women.  Hefty, light-sensitive Janina Duszejko (Agnieszka Mandat) is an unlikely heroine – retired structural engineer, ex-hippy, part-time school teacher, vegetarian and animal rights activist — the villagers think of her in her isolated cabin as a witch.  Janina’s fury over her missing beloved dogs and brutally hunted animals by corrupt politicians and businessmen sets her on a long, determined path (allied with a few young and old misfits with useful skills) to convince The Powers That Be that wild animals are serial killers out for revenge, while leading citizens are mysteriously dying.  Strikingly filmed in a multi-national production by cinematographer Jolanta Dylewska over three changing seasons in the Klodzko Valley’s towns, forests, meadows, into the night and in the snows on the mountainous Czech-Polish border, maybe Janina can control supernatural forces too so surprisingly, and even romantically, prevail.  Poland’s official submission for Foreign Language Academy Award, hopefully you, too, will be able to fall under its magic spell. (NLM: 4/5)

In this U.S. premiere, Argentinean director Lucrecia Martel reinvents the historical epic by bringing to life an absurdist look at an unnamed, isolated late 18th Century Spanish colony in South America, adapted from Antonio di Benedetto’s 1956 novel.  Martel’s previous films center on men, there are no heroes here, and dirt is everywhere.  The titular low-level officer magistrate (Daniel Giménez Cacho) keeps getting further mired in the royal bureaucracy, as his ambitions are thwarted to get posted nearer his family he’s trying to stay faithful to, let alone to get paid.

In loosely connected, sweaty incidents, he moves through the rigid and racist social structure, where black slaves are casually brutalized, white women flirt against restrictions and indigenous women are concubines.  Years of frustration go by, until he desperately volunteers to help search for a notorious bandit in the wilderness.  In Argentina’s official submission for the Foreign Language Academy Award, the full impact of this lacerating look at mutual victims of imperialism only comes clear in the ironic finale.  At the film festival’s press conference, Martel revealed she was inspired by science fiction movies that wrongly imagined the future to change how audiences see history.  Strand Releasing will distribute the film to U.S. theaters in early 2018. (NLM: 3/5)

German director Valeska Grisebach’s third feature is a timely setup of foreign workers versus the natives, all enmeshed in xenophobia and macho posturing.  A German construction crew works on building an EU-funded hydroelectric plant in rural Bulgaria.  While they are bringing their superior technological development to a poor country, this is not a plum assignment for anyone who had other employment opportunities or skills.  The Germans share a primitive cabin and take orders from young blowhard supervisor Vincent (Reinhardt Wetrek), who gets increasingly exasperated as the deadline for completion looms, supplies and the payroll run short.  He orders them to stay put, but the loner Meinhard (Meinhard Neumann) sneaks off to the nearby town and starts fraternizing.

The lanky, Gary Cooper-esque Meinhard learns some Bulgarian, wins over the wary townspeople, especially a pretty barmaid and the owner of a white horse he rides in on, and talks about ending his wandering to settle down.  All very John Ford-ian.  But more of his restless crew arrives, acting like the German equivalent of “the Ugly American,” to quickly wear out their welcome, and nasty tensions rise.  (Last year’s Toni Erdmann had a similar contrast; Grisebach was a script consultant.)  Meinhard has to choose a side.  Though the body language of the non-professional cast is mostly clear, American unilingual audiences may be at a disadvantage and confused as to who is speaking what language (or which flag is which) as the interactions intensify; other films usefully employ yellow or italic subtitles to help distinguish.  After this U.S. premiere, Cinema Guild will release Western in U.S. theaters early 2018. (NLM: 3/5)

Claire Denis has been a major French film director with over a dozen films during three decades, each in a different style of intensity.  With co-screenwriter Christine Angot, she experiments with a rare female character on screen – a mature, divorced mother who is searching for true love, physical, emotional, and realizing she needs stability too.

As played by Juliette Binoche (and filmed by Denis’s longtime cinematographer Agnès Godard), Isabelle is sensually believable as a confident Parisian artist who attracts, one after another, an array of lovers and male admirers, from too young to too married.  While there’s more philosophizing than romance or sex, and some verge on the selfish clichés of rom com dates, it is fun to pick out cinema treats, including returning actors from her previous films, such as Laurent Grévill and Alex Descas, and filmmakers Xavier Beauvois and Bruno Podalydès, with a climactic cameo of gravitas by Gérard Depardieu.  Despite the initial inspiration by Roland Barthes’s A Lover’s Discourse, this light fare is best served to their fans.  Sundance Selects will release the confection in the U.S. (NLM: 2/5) 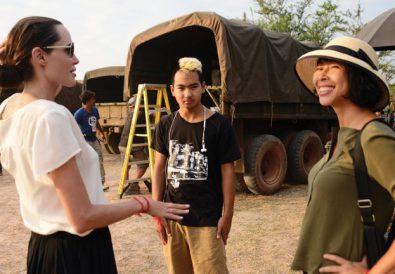 by Nora Lee Mandel November 6, 2017
Nora Lee Mandel is a member of New York Film Critics Online. After high school weekends spent learning film history at NY’s Museum of Modern Art, she studied film criticism at New York University. In addition to many years of writing for national and New York City organizations in the arts, education, history, and city planning, her reviews of documentaries, independent, and foreign-language films, books, television, exhibitions, and music have also appeared in such outlets as: Film-Forward.com, FilmFestival Traveler and Lilith Magazine, the independent Jewish feminist quarterly. Her ongoing Critical Guide to Jewish Women in Movies, TV, and Pop Music has been the basis for her talks around the New York region.
Previous Post Next Post