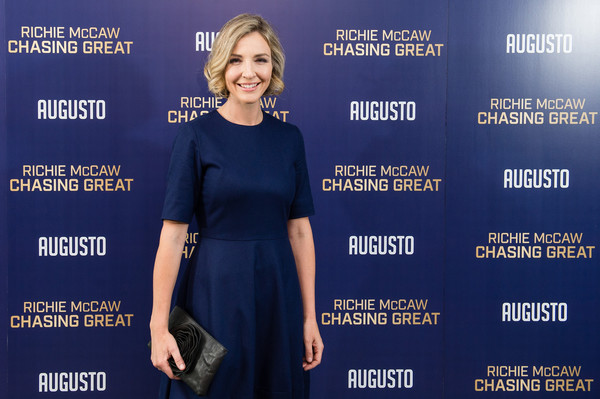 Contributing Editor, Lindsy M. Bissonnette had a chance to talk with Chasing Great co-director, Michelle Walshe, on the importance of documentary filmmaking and her experiences following All Black captain Richie McCaw.

Michelle began working with the All Blacks in 2009 and has since directed numerous global commercial campaigns and documentary pieces for the likes of Adidas, NZR and AIG forming a strong bond with many of the players.

Using her inquisitive and open-minded approach, Michelle documents sport in an often-unexpected style. She is passionate about bringing to life untold stories where dedication, exceptional drive, and extraordinary ability collide to create rich and engaging narrative.

Her most recent documentary ‘The Making of Black’ tells the story behind the legend of the All Blacks jersey and was released internationally through IMG mid 2015.

LMB: What are the struggles/ benefits of being a female filmmaker?

MW: To be honest, I hadn’t really thought about my gender for the last 10-15 years because it hasn’t been much of an issue, but what I do notice specifically are moments of gender bias. It’s confronting, and it’s a challenge to get around it, but female directors and producers are going through this regularly. There are a lot of unconscious biases going on and some are not as unconscious. I might be described as “Michelle Walshe mother of four” before I’m described as “Michelle Walshe, filmmaker.” But, I think being a mother makes me wonder what values can I put into this film that a child or adolescent could take out. I’m proud of being a mother but that isn’t what makes me a filmmaker. [Journalists] never mention it anywhere to be disrespectful, but it’s interesting as a point to share, it kind of devalues the skill.

It’s the unconscious [biases] that get me, people don’t realize what they’re saying or writing, and it makes you go oh wow, this gender bias is really real. When it happens once you think oh its just an individual example, and it doesn’t get under my skin too much, but when it’s happening on a big scale, it’s a huge problem. That’s why we need females writing.

My producer Cass is a female, and we were in the middle of a male dominated environment like most sports are. Having another female to go into that world with was nice. We were lucky though; our gender didn’t come into [the making of this film] at all. We felt very respected in this project. [Gender] didn’t come up at all until it hit the press in New Zealand. It’s great that people are talking about it, a decade go I’m not sure people would be.

LMB: What was one challenge of being a co-director/co-writer?

MW: I love co-directing. What you think should be in [the film] you often think about a lot of the emotional or physical hardship of getting footage, or great experience of collecting it –whether it be an interview or scene, or getting access to or a difficult scene to capture– you take those emotions and feelings into the film and you might hold on to something that you worked really hard on but that isn’t great. [Justin Pemberton] did post, and I did field work, and he was just looking at [footage] for what it was and what value it brought to the film.

For myself, I learned a lot more about my own judgment in taking those things off the field and into the room. I was so grateful for the gold that he found that I would have just scrubbed past. He saw things for what they were. There was one instance in particular right before World Cup, we had access to Richie. It was difficult to find somewhere that wasn’t noisy and it was so cold and I thought the interview was awful but he said it was amazing and I said are we looking at the same thing? And producers often do this as well! But when someone is tasked with looking at every frame they find gold. If there was something we both loved it was really strong if someone is fighting hard for something I knew it was something I needed look at again.

LMB: What’s one piece of advice you would give other young aspiring female filmmakers?

MW: A good question because I don’t think it should be different advice, but it is. As a female in this industry you bring a different strength and quality. You have different life experiences and it’s really important and understand the value of that. You’re not trying to be a male or be anyone else, just value your experiences bring those things in. Men have different equally valuable qualities, but we need more female voices. Know your value. Know your voice needs to be heard not because you’re female but because your experiences matter.

Have a good technical knowledge knowing the technical aspect really helps build respect, and it just helps people get over any judgment or discrimination. Be able to build professional relationships quickly. Strong leadership and strong vision is what people want.

MW: What makes somebody extraordinary is the difference between good and great, find what puts good and great apart. How do you take something good and always look for greatness and fight hard for it and push yourself. Push for your own greatness you know if you’ve left anything on the table. It’s those little margins that make people extraordinary

The film really transcends rugby, about what makes people extraordinary, and the [watching the film in a theater] really enhances the experience!

Interested in learning more about Michelle Walshe’s work and Richie McCaw? You can watch the film on iTunes here!