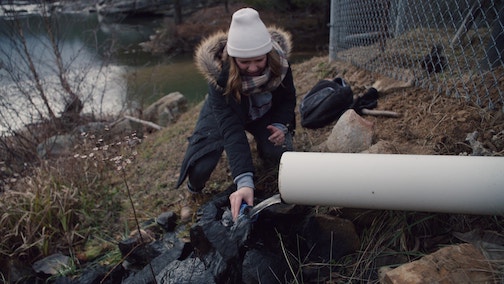 In Amy Adrion’s recent documentary Half the Picture, several women directors note that sometimes executives will compare a director’s role to that of a ship captain or military general, as if it requires some masculine persona to withstand the strenuousness of production. It’s not unheard of that a production crew member will refuse to acknowledge a woman as the director, because she just doesn’t fit the image of a “leader.”

I think back on the first film I ever worked on. It was directed by a woman, Ursula Ellis. At the time she was in the midst of her MFA at Columbia, and she already had some impressive projects under her belt in her production company name, Little Bear Pictures. When I ask her about the impressions of the directors in Half the Picture, Ellis looks a little tired—she’s had her share of experience with this, too. “People have a lot of opinions of how you should be as a director, of what a director looks like and sounds like,” she says. “Hopefully [those ideas] are becoming more complicated as more kinds of people are represented in the industry.”

In winter of early 2015, the cast and crew of Ellis’s short “This Is Not a Love Song” took a trip out to a New Jersey suburb to shoot in the production designer’s family home. The goal was to make the bedroom look like it belonged to a fourteen-year-old girl trying desperately to grow up: think riot grrrl posters, clothes everywhere, and dim red lighting over walls that are still nursery-pink. Like lots of our old teen bedrooms, the production designer’s room was pretty much already there. It just needed excess.

Ellis had done a lot of work to set the tone for production week. “Embrace your inner angry teen,” she’d written in an email to the crew, signing off, “Let’s make a moooovie!” I was working on the project as a boom operator, and I was completely fascinated by her jovial and effortless authority on set. Every aspect of this story was entirely hers. For one scene, she’d even conjured up a 5am concert from nothing, complete with punk band (her friends) and audience (also her friends).

Ellis’s presence alone spread creative excitement. When the crew was sleepy and cold working on some outdoor scene, she was there in a long sleek coat, clutching her coffee and bouncing her knees in the winter air, looking breathlessly into her monitor. The cold didn’t reach her somehow. I wonder if she’d find my impression of her surprising, amusing, or just a matter of course.

A few years later, Ellis has just graduated from film school at Columbia, and we meet to talk about the production process of “This Is Not a Love Song” and everything she’s been working on since. From my boom op standpoint—which is an incredible way to observe scenes up close, by the way—I have vivid memories of the laughter and stress of the production process, and particularly the high level of creative collaboration between Ellis, her actors, and her cinematographer, Nick Perron-Siegel.

I tell Ellis how I recall her close friendship with her young lead actress, Chloe. Ellis explains that she tries to make herself vulnerable in the same way she’s asking her actors to do, and that usually ends up creating a friendship. “Some people say not to do that,” she says, laughing, and cites a film school professor’s warning that it’s not a good way to keep control of your artistic team. Clearly it works for Ellis, though. She and Chloe would whisper intensely before emotionally fraught scenes, and they’d playfully chide each other in a way that communicated incredibly effective creative feedback. They make fun of the world from a sense of shared history as strong as that of two sisters.

When asked what she would make if she had no limits, Ellis notes that, although so far she’s made short films, she’d probably prefer the long form of a TV series. She loves to fabricate her own worlds. You can feel it even in her shorts: the worlds she creates are so immersive and elaborate that it’s hard to leave them when the films end. Ellis tells me about taking a whole cast and crew to a relative’s home in rural West Virginia for her thesis film, “Crick in the Holler.” She and the same production designer from This is Not a Love Song, long-time collaborator Carrie Heckel, redesigned an entire house interior for the shoot. Ellis also spent ample time with actors working on accents and cultural nuances.

You can feel it when you watch “Crick in the Holler,” as there’s so much packed into short form. In eighteen minutes, the film portrays two sisters, their small town, and the early signs of a chemical spill that puts the town into crisis. In one particularly acute emotional moment, the cashier in a convenient store is distracted by a news report of the toxic chemical. Every aspect of Ellis’s world is carefully crafted, sometimes hidden, ready to show subtly at every turn.

I shudder at the thought of shooting so many outdoor scenes in the dead of West Virginia winter, recalling how painful it was to stand holding the boom mic or guarding equipment for “This Is Not a Love Song.” One of the PAs had bought every single hand- and foot-warmer available at the CVS down the street to hand out to the cast and crew. I ask Ellis how she deals with the physical and mental stress of production, especially as the person who has to be the first to arrive, the last to leave, and the source of optimism and energy for everyone all throughout. She laughs, and says, “Adrenaline, mostly!” She adds later, thinking on it, “Also, force of will.”

Ellis recalls that she was injured for much of the “Crick” shoot, and she could often be seen crouching peculiarly with a hand-held monitor that she couldn’t hold up. When she and Carrie were working on the house redesign for that film, they’d hit a deer, and Ellis had hurt her wrist on the dashboard. She laughs to remember it, how she was too carried away by the project to think about her wrist. When the shoot ended, she had to be driven back to New York from West Virginia, and only then could she get some rest. For days afterwards, she could do little but lay in bed, discovering and healing from injuries she hadn’t realized she had.

This is exactly the kind of toughness that is not generally associated with femininity, and that might be a source of skepticism around women as filmmakers. Still, Ellis tends not to let herself get discouraged by the systemic limitations on women as storytellers in Hollywood. It’s certainly not a main focus of hers. If anything, it just demonstrates to her that she has something unique to show with her art. This is likely the source of the aura she carried on set for “This Is Not a Love Song”: never serious or domineering, but always excited and quietly self-assured in a way that made her vision contagious.

That’s how you get these films of Ellis’s which feel so vivid and new. “This Is Not a Love Song” is centered on teenagers with intelligence and real worries. “Crick in the Holler” is saturated with the imagery and sounds of a real West Virginia town, and the portrayal is so detailed and sensitive that it’s beloved by the real inhabitants of the region. Ellis’s most recent project, a short called “For George on His 30th Birthday,” portrays a relationship between a young woman and a much older man, but the arc of the film subverts the power dynamic we’d tend to associate with that pairing. “I’d like to see more movies about women by women, so I’m gonna make those,” says Ellis. “I don’t plan on succumbing to any pressure to do otherwise.”

by Amelie Lasker June 30, 2018
Amelie Lasker joined FF2 Media in early 2016 after graduating from Columbia University where she studied English and history. She has written plays and had readings for Columbia’s student-written theatre company Nomads, edited the blog for Columbia’s film journal Double Exposure, and worked on film crews and participated in workshops at Columbia University Film Productions. She spent junior year abroad at Cambridge University, where she had many opportunities for student playwrights to see their work produced.
Previous Post Next Post