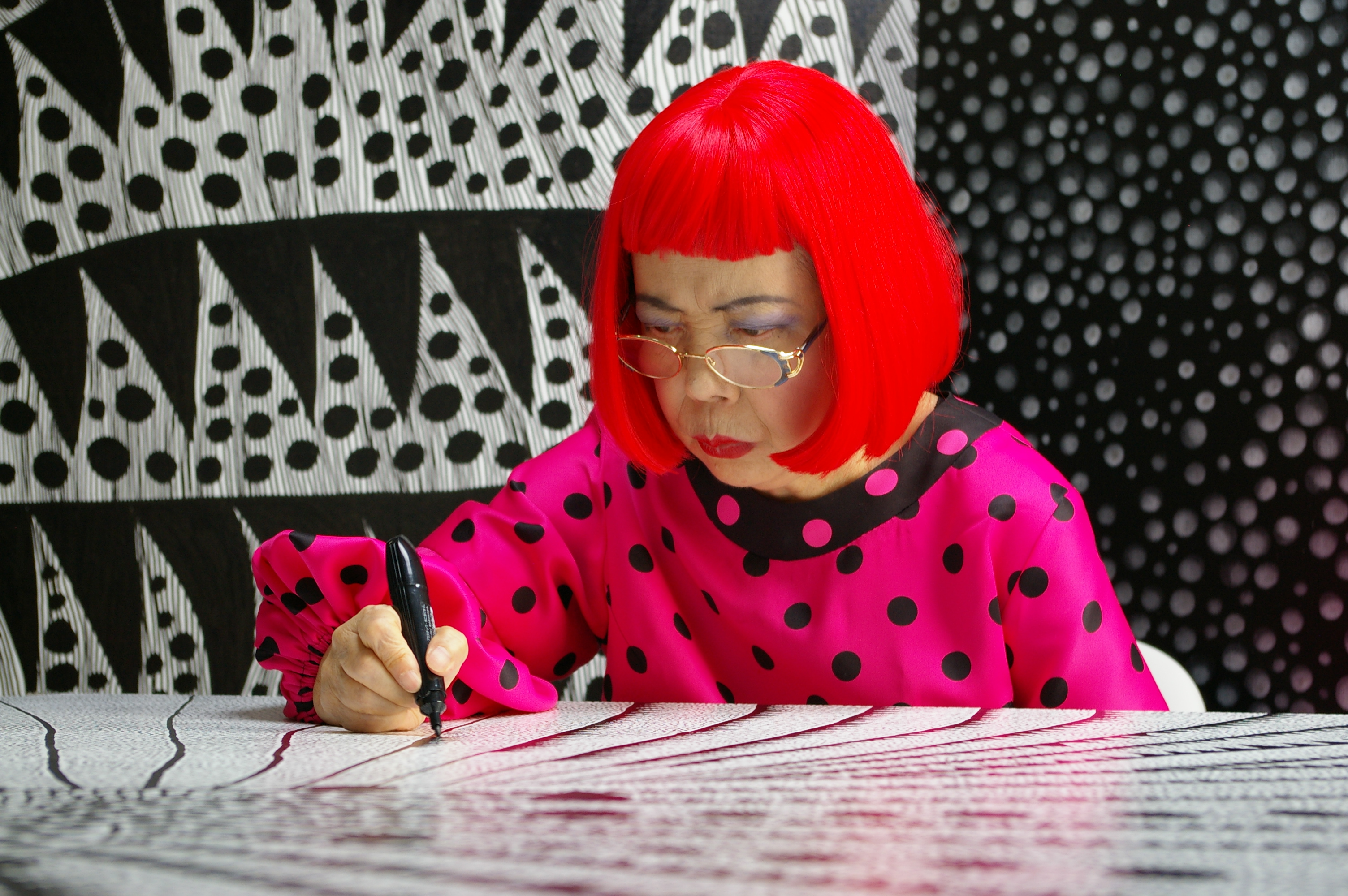 In a world of dots sits their creator, Yayoi Kusama, the Japanese responsible for paintings with thousands of dots, soft and fluffy furniture, and infinity mirror rooms. Those familiar with the current art world no doubt know her as the top selling female artist currently living and working. But for others (myself included) art history classes didn’t include Kusama’s art…even when mentioning some of the male peers she inspired. In her new film Kusama: Infinity documentarian Heather Lenz takes audiences on a journey to experience her remarkable work but also digs into the woman who created it.

Lesley Coffin: I’m embarrassed to admit that I didn’t know about Yayoi Kusama or her work before seeing the film. Do you recall how you first learned about her?

Heather Lenz: My undergraduate degrees are in art history and fine art and back then we’d study the history of art in these very thick text books. And after finishing Art History 1 and Art History 2 we’d probably only learned about five female artists. And Kusama certainly wasn’t one of those artists, so I’m not surprised you didn’t know about her, even though she’s the top, living, female artist. If you pick out 10 people on the streets, they probably wouldn’t know her name either. I wasn’t introduced to her work until I took a sculpture class and was instantly taken with her work. At that time there was only one catalog on her, which is strange because now there seems to be a new book about her every month. But after just reading that first book I felt that she was a really intriguing person who had had a really compelling life, in addition to the stunning art work she created. And I felt, especially then, that she hadn’t received the recognition she deserved.

Lesley Coffin: How did you get in touch with her?

Heather Lenz: Originally, I reached out to a curator who managed to get the contact information for her staff. I had a friend who spoke Japanese give them a call on my behalf. I naïvely thought that they’d just be excited to hear someone wanted to make a movie about her, but they asked right away what TV channel it was for or if it would be in movie theaters. They really didn’t understand how documentary films are made at all. And that’s when I realized that this would be a much longer project to get off the ground. So I reached out to curators, fellow artists, and collectors, and created a pitch tape to show to investors. And a few years later we won two grants. First we got money to travel to Japan, something I’d applied for year before and when I finally won the head of the organization was quite surprised that I still didn’t have Kusama’s permission. But she took me under her wing, came with me to Japan, and helped me make the connection I needed to make. She told me to take conversational Japanese classes and taught me some things about Japanese culture before I left, because there are a lot of different rules. I learned you have to bring a gift and that how long you bow relates to your social status. And I went to Japan a couple of times and had a chance to spend time in her archives.

Lesley Coffin: She came to America so early in her career yet she never omitted her Japanese culture from her work. She just chooses the aspects of both cultures she wants to integrate into her life. Once you learned more about Japanese culture did you realize anything about her artistic work that you weren’t aware of before?

Heather Lenz: One thing about Kusama is, she went to art school and studied the traditional form of art in Japan at the time, which was stricter and had a lot of rules. But she was also inspired and exposed to a lot of artistic movements in the west. And by the time she’d decided to come to New York, she’d been exposed to things like surrealism. But she came here with some success in Japan as an artist. She’d had a couple of shows. I think one of the first things to change when she came to New York was the scale of her work. Her work got much larger. What’s so interesting isn’t just what in those societies interested her but what she brought with her. Some people say when she came to New York she took the west with her, and then went back east and took the west. And that’s one of the things which helped her become internationally known. We are certainly all influenced by the culture’s we are raised in. When she was growing up things were more restrictive for women, she had the opportunity to get married but decided that wasn’t for her. She realized she wouldn’t have been able to accomplish what she wanted to if she stayed in Japan.

Lesley Coffin: And in the film it’s mentioned that the first time she experienced a big response was in Europe, and she went there almost as a famous artist. Did she ever talk about what appealed to Europeans in her art which didn’t translate to American audiences?

Heather Lenz: We never specifically discussed that. One of the things which did stand out to me was, in New York she played by the rules. She exhibited in shows in galleries, and hadn’t experienced a great deal of success. She hadn’t had a solo set yet. And when she went to the Venice Biennale in the 60s, it was like she decided to take her career into her own hands. She crashed an event she hadn’t been invited to. She decided she would no longer allow others to tell her when and how she would display her work. And that kick started a period of several years when she had happenings in all different places. I really liked that, it’s like when filmmakers look to crowdsourcing instead of waiting for a studio to finance their movie.

Lesley Coffin: She seems very soft-spoken in the film. Are those moments when she took a rebellious position times in her life she speaks of with pride?

Heather Lenz: I hope she takes pride in, because I really admire that behavior. She’s a very strong-willed person, you’d have to be to overcome the obstacles she’s overcome. But she’s also a very sensitive soul and is a little uncomfortable talking about herself that way. One of the topics she talks about the most in conversations is her hope for world peace. And I think that harkens back to her experience growing up in Japan in the years just after the Atomic Bomb. That aspect of Japanese history clearly influenced her work. She was fortunate because she lived outside the areas hit by the atomic bombs, but it had a huge impact on all of Japan’s culture. Her work really comes from this lifelong pursuit of peace.

Lesley Coffin: I love the fact that you learned about her in a sculpture class, because when most people think of sculptures they think of something hard and cold. And as we see in the film and one of the interviewees said, her work was soft and warm and almost feminine because of the detailed sewing she did. Do you see art as having a masculine or feminine approaches?

Heather Lenz: My grandmother taught me to make quilts, and I actually see a lot of similarities between the work my grandmother did and the work Kusama does on her infinity paintings. Both works create these massive works of art but are created with small, detailed actions. The small stitches and delicate, repetitive brush strokes. They are work which require so much time and detail, and you realize that’s true of a lot of traditional women’s work. When you knit or crochet, you are just repeating the same small movements over and over again until you’ve created this large piece of art. And I do think that’s an artistic approach traditionally attributed to women more than to men.

Lesley Coffin: How many interviews did you end up recording with her?

Heather Lenz: I went to Japan a few times but stayed up to a month. And we interviewed in her different locations. We interviewed her in New York and I sent a crew to interview her in London.

Lesley Coffin: How did you select the additional interviewees for the film?

I wanted to interview her peers, especially those who were in New York with her. One of the first people I interviewed was Beatrice Perry. That was fortunate for us because she is one the people who died during the making of the film, which happened multiple times. It was important for me to speak with people who were there at the time. It was also important to talk with experts who had studied her work. We actually interviewed a lot of people and most of them didn’t end up in the film. We ended up feeling we needed to give priority to Kusama herself and the people who could give firsthand accounts.

Lesley Coffin: You included that very moving moment at the end when you state that she’s the top selling, living, female artist and there are all these young people so excited to see her work in person, standing outside like it’s a rock concert. And throughout the film there’s talk of the more restrictive art community she entered in the ’60s. Do you feel she was one of the artists to usher in the idea that art should be for the masses?

Heather Lenz: I certainly think so. When she went to Europe and was selling the mirror balls she’d created for just a couple lira she was accused of trying to sell her art like hot dogs and ice cream on the street. She was looked down on. But these days, it’s not uncommon for big selling artists to also make more affordable art. And of course with those mirror rooms she creates for galleries and museums, she’s offering people a chance to have an experience, and no one will own that room when it’s over. But I think she appreciates that people from all walks of life have a chance to experience her art.