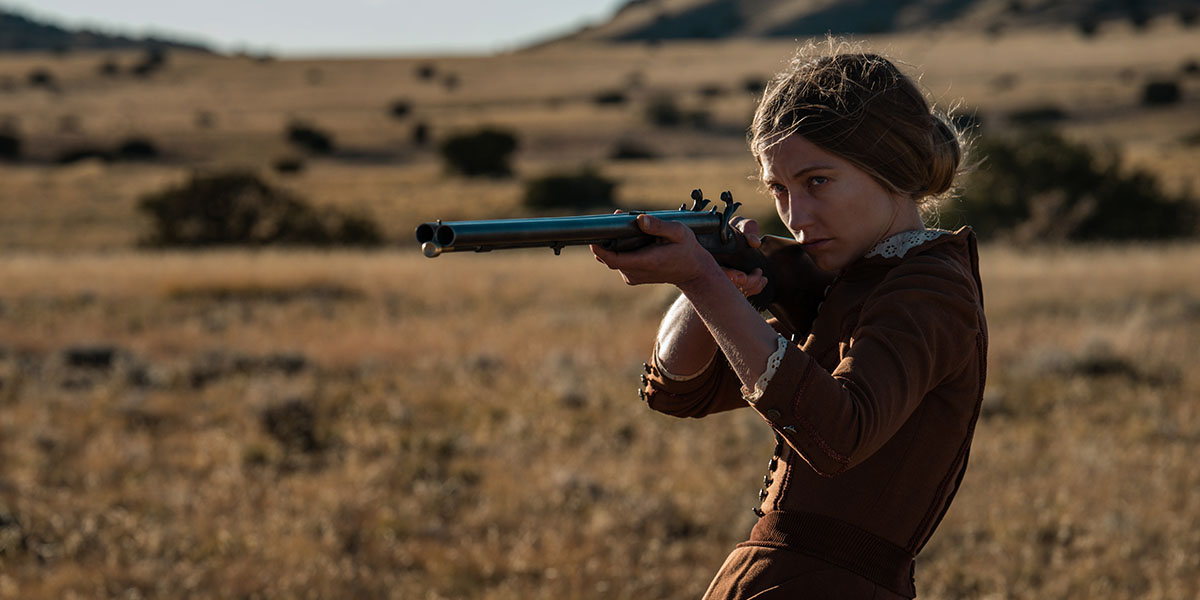 Within film festivals, the Midnight Madness section has become a common program. Yet, it’s also the one section in film festivals which singularly exclude women. It’s not uncommon for even major festivals to exclude women from this focus on new genre films. This year at the Toronto International Film Festival, alongside new entries in the Halloween and Predator franchise, the only film directed by a woman is Emma Tammi’s The Wind. But this horror-western also happens to be written by a woman Teresa Sutherland, and stars two women, Caitlin Gerald and Julia Goldani Telles, as two homesteader wives. The only human beings for miles, the two women develop a close but contentious relationship, made all the worse by the fear that something supernatural is among them. I spoke with the film’s writer, director, and leading actress Gerald about creating historical accuracy in genre and joining what has traditionally been a boys club.

Lesley Coffin: The press screening essentially sold out and they had another, but I had to watch the film on a screener, rather than on the big screen like I intended. I especially wish I could have seen it with good sound. I think I missed the full creepy effect. Did you know even in the writing process how important the sound design would be?

Teresa Sutherland: I feel like in the screenplay, after almost every scene I wrote in something about the sound of the wind.

Lesley Coffin: Were you able to capture those sounds on set or were you adding them during post production?

Lesley Coffin: The film has to convey the total isolation of the plains. Where did you find the location?

Emma Tammi: There are a lot of great ranches in New Mexico that are still really sparse. Little properties with a lot of distance between them. We were about a half an hour outside Santa Fe?

Lesley Coffin: We’re so used to horror movies where things go jump in the night. Did you want to make a movie where a lot of the violence took place in the day?

Emma Tammi: We were trying to do things in the space where the light was changing. When things are getting dim and you feel like you can’t see clearly. I think for me, when you’re a kid and the light starts to go down, you are always thinking “do I see something, do I hear something?” And we wanted the audience to think Lizzy might be going through the same thing, wondering if things are really out there or if she’s hearing things. So twilight really plays into that. But there were other times when the harsh sunlight at noon, which really is just beating down, and had an ability to play up the gore. Seeing something come back to life in the starkness of noon can make you feel even crazier than if it happened at night. There are a lot of night time haunts, but we wanted to pick and choose.

Teresa Sutherland: Just researching everything, you realize that terrifying things happen at all times of day. I think that playing with daytime scares is an interesting way to keep audiences from settling in too much into the idea that they’re watching a movie. Audiences are ready for scares at night, but for the characters, it made sense. Day or night, they’re all alone and they know something can happen at any time.

Caitlin Gerald: Psychologically, isolation is just so terrifying. You’re alone 24 hours a day so there is no reprieve day or night.

Lesley Coffin: The film certainly seems well researched. Where did your interest in the subject mater original from?

Teresa Sutherland: I had the very first spark of an idea for this about 10 years ago, and thought “I need to know more.” There are actual accounts of women going mad out on the plains. I spoke to an older woman from Kansas who had stories. And then I kept reading old diaries and letters. About 5 years after doing all that research we made the short, and then they said they wanted a feature and I was like, not a problem. I kept wanting to go back to do more and more research.

Lesley Coffin: Did the two of your read some that research Teresa had compiled?

Emma Tammi: Caitlin had very little time to dive into the research but she did as much as she could in the time she had. And I spent about 6 months reading as much as I could. I had actually read some of the letters and diary entries as a teenager, I had spent time in Wyoming and went through a stage where I was obsessed with plains women. And we gave books to every department head, because they were such incredible resources.

Caitlin Gerald: It was this book by Joanna Stratton and it was really informative. My favorite part of working is doing research. I didn’t have time to do a lot of research myself, they gave it to me. But it was such a feast to have a chance to devour all that information and bring that knowledge to set. I fell asleep every night listening to Willa Cather novels and I’d wake up with it still going. Buy somewhere in my subconscious I heard these epic descriptions. So I was in that state of mind for about 20 days. We’re all nerds and love research. I randomly mentioned that I speak German and they had said Lizzy’s German immigrant. Because they knew that most of the frontiersmen were German. They didn’t leave any stone unturned.

Teresa Sutherland: I remember looking up, because Germany was on the cusp of not being call Germany around the time the film was set. I looked up what people had written down at Ellis Island, just to make sure she wouldn’t have said Germany.

Lesley Coffin: What do you find so valuable about being that detail oriented in the research?

Caitlin Gerald: For me, I think details offer truths. So knowing that I would use that specific word, rather than what I’d call something now, it allows me to remove myself from the situation and get deeper into the character’s life. I think being that detailed allows you to have integrity.

Teresa Sutherland: Also, our own imaginations were really captured by all the research and we were motivated to get everything just right.

Caitlin Gerald: All the props are authentic, except of course the Demon of the Prairies. But even the diary was an authentic diary, and our prop master told me he died a little every time I burned a page. I didn’t know it was authentic until after we filmed that scene. The audience doesn’t need to have that information, but if we have that available to us on screen, it leads to our authentic and the audience will believe us more.

Lesley Coffin: Did you consider where the film exists in terms of genre? Where it falls in the horror genre and the western genres?

Emma Tammi: What drew me to the script is the same thing that drew one of our actors to it, Ashley Zukerman who plays Isaac. He said he found it fascinating that all the westerns he’d watched follow the men when they leave, and this film stays with the women on the homestead. And I thought that was the best way to describe what initially appealed to me. I think the film really taps into the canon of horror and westerns, but subverts it.

Teresa Sutherland: Writing it, the film always felt like a horror movie, set in a western environment. Horror is the genre I love and have lived in my whole life. I kept thinking, I’m about to do terrible things to these women, but look at how amazing these women are.

Lesley Coffin: Midnight madness program are often exclusively male. Has that made the experience of being here with this film feel any different?

Emma Tammi: First and foremost, I hope the people who go to Midnight Madness screenings will come regardless and judge it as just a movie. But I was part of a panel yesterday, talking about women working within genre, and I think that what being included in a program like this offers is an example of the type of stories which can be included in genre programs.

Caitlin Gerald: It’s an expansive moment in the industry. New voices are able to tell stories. Yes, it’s a familiar genre, but we’ve put a fresh voice on it.

Teresa Sutherland: For me being a horror fanatic all the people I grew up looking up to, like John Carpenter and Wes Craven, were men. And for so long, a lot of their movies were about female protagonists. We’ve seen men telling women’s stories for such a long time. And I’m excited to start seeing those stories told by women. I hope this brings a little more realism or just feels something a little different. That you feel a woman wrote it, a woman directed, it, and inspired their female protagonist.

The Wind made its World Premiere at the 2018 Toronto International Film Festival.

Photos: The Wind (Courtesy of TIFF)