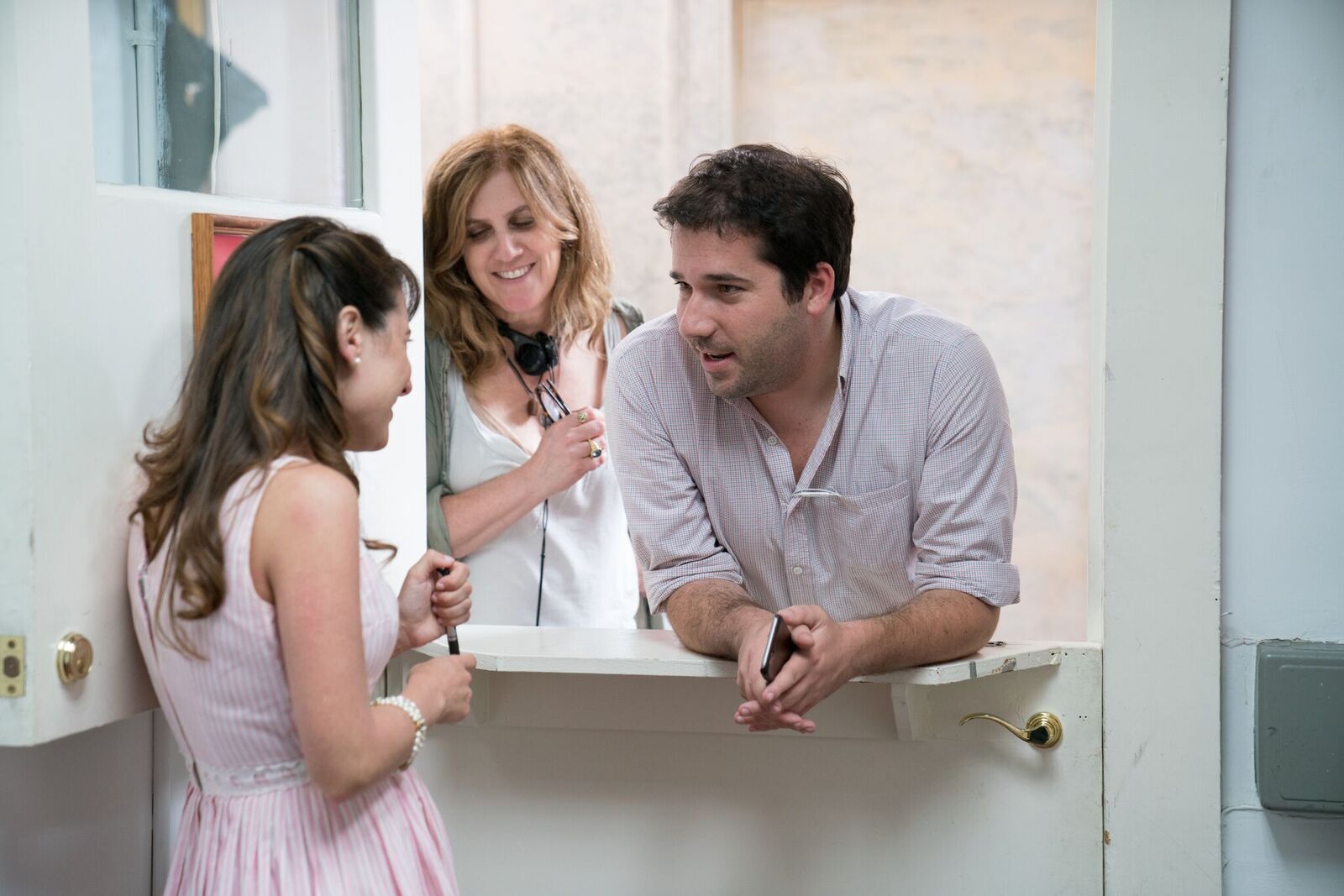 Margo Neely, Stacy Cochran and Adam Gibbs on the set of Write When You Get Work. Courtesy of George H. Price Productions

In the “golden age of Hollywood”, films often focused on the class differences that can exist even amongst neighbors in cities like New York. From My Man Godfrey to Holiday, neighbors could come from completely different lifestyles and economic systems. Even the ‘80s resurgence of screwball comedies, like Trading Places and Arthur, delighted in exploring class through romance and humor.

Stacy Cochran takes a similar approach with her new romantic dramedy/heist film Write When You Get Work. In the world of New York high finance and Manhattan private schools, have-not Johnny (Finn Wittrock) pursues his ex-Ruth (Rachel Keller), an admissions officer, and gets entangled in the lives of the Nobles (Emily Mortimer and James Ransone), two haves about to lose everything.

Lesley Coffin: When you first started working on this film, did you conceive it as a film that wove in multiple genre twists? Or was that something that came about as the script evolved?

Stacy Cochran: I started working on the film thinking I was writing a love story. But as I started to pull in new strands of information, the genres started to evolve.

Lesley Coffin: New York is such an important part of the film, and you’re really having to stress the class and economic differences of people who live relatively close. The characters are separated by a river.

Stacy Cochran: I’m always interested in how people camouflage themselves to accomplish things without having to reveal their entire backstory. The difference between who you are and what you present is interesting for a character and can create tension and conflict. I was interested in the how Ruth and Johnny come from a very different place from Nan and her husband, but under this one circumstance, school admission, she is an authority figure over Nan. I was really interested in a story about gatekeepers, and how that sense of privilege can be flipped on its head?

Stacy Cochran: I have three daughters, and they’ve been through that system. So, I know about it. But I feel like I’ve lived the life of a lot of these characters at different stages of my life. It was fun to write the dialogue and think about some of those people I know in that world. I really identify with the sense of frustration that comes from feeling like your being excluded from something.

Lesley Coffin: With the four main characters, did you want audiences to draw comparisons right away to the relationship between Finn and Rachel and Emily and James?

Stacy Cochran: Oh, for sure, I think you see that right away. I wanted all four characters to earn and receive empathy from the audience. I didn’t want people to hate Johnny, and I didn’t want the Nobles to just be there to be the butt of the joke or engines for the plot. I didn’t want them to just be the bad guys, even though they kind of are, and the good guys aren’t so good either. They all have blind spots and misunderstandings of their world. I really do love the Nobles, even though they aren’t given that opportunity to shine.

Lesley Coffin: This is the most buttoned up I’ve seen of James Ransone but he’s good at playing that kind of character.

Stacy Cochran: James is so great. As a finance guy I found him feel completely authentic. The story is kind of playful, the film isn’t slice of life, but I wanted the underpinning of that story to feel authentic. And that comes from the acting, especially James and Emily. They feel completely of that world

Lesley Coffin: They both feel like actors who could fit very easily into that screwball era of the ’30s. Did you look at any of those classic films from the genre for inspiration? Or even the classic examples of the heist genre?

Stacy Cochran: Absolutely. I’m crazy about screwball comedies and thought about them a lot before getting to set, but once you’re on set making your own movie you kind of put them out of your mind. I’m nutty for Carol Lombard and Ernst Lubitsch. I wanted to have that Trouble in Paradise moment. I wanted people to have that Shop Around the Corner feeling when Ruth reads that application. But it’s not just about being inspired by those films. I feel very connected to the women in those films, and that’s why I’m laughing. It’s reminding me of the things I really like to watch and types of films I want to make. I happened to see the Pauline Kael film recently and there was a moment when she spoke of the brassy women from those films and she said “those were women and that was dialogue back before this country hated itself.” And I’m sure I’m misquoting but I love that those films are so funny and sharp, but there is still this sense of optimism shining through.

Photos: Write When You Get Work (IMDb)

Featured photo: Margo Neely, Stacy Cochran and Adam Gibbs on the set of Write When You Get Work. Courtesy of George H. Price Productions