As we enter the summer months, it’s not unusual to find science-fiction films hitting theaters. From the light and fun to the more serious, they can often have the epic scope you expect to find in blockbusters. But it’s rare to find a science fiction film hit theaters as bleak and philosophically expansive as the new film Aniara. Written and directed by partners on-and-off-screen Pella Kagerman and Hugo Lijia, the film focusing on the daunting “what if” a spaceship taking those leaving a dying earth for a new planet find themselves off course indefinitely and left to ponder their own existence indefinitely. While the film is a difficult watch, it is also a thought-provoking experience and anchored by the moving performance by lead Emelie Jonsson and Kagerman and Lijia’s remarkable cinematic eyes. We spoke at last year’s Toronto International Film Festival where the film premiered.

Lesley Coffin: I can honestly say this was one of the most devastating movies for me to watch but I was also completely hooked from the beginning. What’s the origin of this film?

Pella Kagerman: It’s based on a poem by Harry Martinson and it’s very popular in Sweden but isn’t well known around the world. And it’s been told in an opera before and plays. And I was very close to my grandmother and I went with her to see one of the stage productions. And the night after she had a stroke and I read the poem to her while she was lying in bed. And then as she was getting better we started to role play in the hospital, pretending the doctor was the captain and the patients were the passengers. And that’s when I realized how amazing the poem was.

Lesley Coffin: Do you happen to know the year the poem was written?

Lesley Coffin: So just as the space program was starting and before we really understood the science of everything. Did you try to make scientific sense of the story now that we have more knowledge of astronomy?

Hugo Lijia: In the book he’s describing things which are almost magical, so we took some things out and replaced them with things which are scientifically feasible about what could happen in the future. But we didn’t try to do that with everything.

Pella Kagerman: But we tried where we could. We met with so many astronomers and astro-scientists about what was possible. We got into a huge fight about how high to make the ceiling and you can’t even see them in the film.

Hugo Lijia: But at the heart of it, the film is about the vastness of space, so we made a point of getting distances correct. We double the speed the ship is traveling from what is in the book and they’re traveling to Kepler which is a plant which could potentially support life which was only found a few years ago. So, we updated somethings, but also ignored some other things. They aren’t communicating with earth because there are no cellphones in our movie.

Lesley Coffin: I wanted to ask about that because there is a line early on that although everyone will eventually be moving, it’s clear that a lot of people on this ship aren’t traveling with their families. Why make the decision to focus just on life on the ship, rather than look at what their life on earth was like or what life is like for the people they left behind?

Pella Kagerman: Well, we choose to be loyal to the poem.

Hugo Lijia: It’s such a complex story so having more characters and settings would have been challenging. If you told this story in a longer format that could have been interesting.

Lesley Coffin: Science fiction’s all about representing figuratively something out our present day lives. How do you interpret the character of Mimaroben, who is herself connected to the Mima room she works in, being this empathetic figure?

Hugo Lijia: I think they both exist as representations for the planet earth. We take and take from it and inflict pain on them.

Pella Kagerman: But they’re also a substitute for other things. Mima is pretending to be something to all these people until it’s destroyed under their pressure.

Lesley Coffin: The primary romantic relationship at the center of the film, Mimaroben and Isagel, focuses on a same-sex couple who create a family unit. Why make the central relationship in this story non-traditional?

Pella Kagerman: Actually, it’s not made clear in the poem if the main character is male or female, although you assume it is a man base on how it’s written. But we felt it would be more interesting to have a main character that was female, and we loved working with Emelie Jonsson who we’ve worked with before.

Lesley Coffin: In science fiction, especially with film about space travel, the expenses can get enormous. But this is a low budget film. What tricks did you employ to create the production value you needed for this film?

Pella Kagerman: I don’t think we invented this, but we call this a no-set sci-fi genre. We couldn’t afford to film on big studios so we had to go on sets. But that was also the feeling and look we wanted. If spaceships existed, it would probably look and feel like a hotel or shopping mall.

Lesley Coffin: Did you film in a shopping mall?

Pella Kagerman: We did, and on a ferry going back and forth to Scandinavia, so everyone was getting sick to their stomach.

Lesley Coffin: And the exterior of the ship was done with CGI?

Pella Kagerman: Yes, we just used the same measurements that are in the poem.

Lesley Coffin: Had you read the poem before starting this project?

Hugo Lijia: I had tried to read it as a kid but I just couldn’t get into it. But then Pella told me about it and I was old enough…

Hugo Lijia: …to understand it. Reading it you can understand why he won the Noble Prize

Pella Kagerman:  But he won the prize and then soon after committed suicide Japanese style?

Lesley Coffin: You mentioned that he’s well known in Sweden, is that tragic part of his personal history part of his allure to readers?

Pella Kagerman:  No, because they lied about it in the press. His win of the Nobel Prize was the first scandal they experienced because he was a member of the Swedish Academy. And he also suffered a brutal upbringing. He was sold to farmers as a child. He wrote about that as well, and I think Aniara is very personal story. I believe the word means depression in another language.

Lesley Coffin: Being co-directors on the film, do you split the responsibilities or are you always working in tandem?

Pella Kagerman:  We’re always all over the place but we’re usually together. The benefit of us directing this way is we come from very different backgrounds.

Lesley Coffin: Being in a relationship and having a professional partnership, was it ever stressful to constantly be together during this production?

Pella Kagerman:  Actually I found it very nice to have him around all the time. If one of us was going high, the other would go low. It was great during filming, but while writing the script I wanted to kill him.

Lesley Coffin: Writing was hardest on the relationship?

Pella Kagerman:  More the waiting, just holding on while the Swedish Film Institute got back to us. It was so stressful, and we couldn’t offer real support to each other?

Lesley Coffin: Did the film go through periods of being on the list of contenders and not making the final cut?

Lesley Coffin: Did you consider trying to get the film made though different channels, like at a studio?

Pella Kagerman:  We were offered two million dollars but we decided not to take it.

Hugo Lijia: We didn’t want to make an English language film. We had an earlier experience that was negative. And we felt it was important to make it in Swedish. We love the actors and love the language.

Pella Kagerman:  We pitched it in Hollywood and a big time producer was interested until we got to the end and everyone’s dying. He’s like, but someone survives right? And we were like, we got the rights to the poem on that one condition…everyone has to die.

Lesley Coffin: Did you look at any science fiction films for visual inspiration while making the film?

Hugo Lijia: We watched all the space films but tried really hard not to imitate any of them. That’s the reason we spent so much time talking with scientists. We wanted to find ways to portray space as something more boring. This is a film about the vastness of space.

Pella Kagerman:  They’re talking about a close planet but a close planet in space is relative. We kept trying to get less and make it more boring. But we did add some dots anyway. Just so people know its space and not a backdrop.

Hugo Lijia: We had so many discussions about how bright a star would be. We spent a lot of time talking about that detail.

Lesley Coffin: I really liked the movie, but I’d also call it devastating and you think about it long after it ends. What has your experience been with the film at public screenings? Are people even ready to talk about it?

Pella Kagerman:  At our premiere a 17-year-old girl came up and asked me “What did you really want me to think? I just turned 17 and I feel like the film is describing how I feel about my world. I feel like there’s no hope and nothing for me, so I should just give up.” And we were like, no that’s not what we think. The film is about being overwhelmed by the feeling that there is no hope, not that there is no hope.

Hugo Lijia: It’s part of it, it is a warning about the path we’re on which will lead us to nowhere. We can’t survive if we destroy earth.

Pella Kagerman:  And even if we colonize another planet, we won’t be going to a planet exactly like Earth. Like Mimaroben tells someone at the beginning of the film, “we aren’t going to find a paradise.” 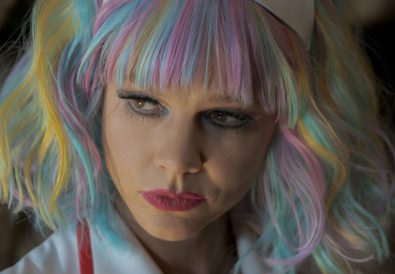 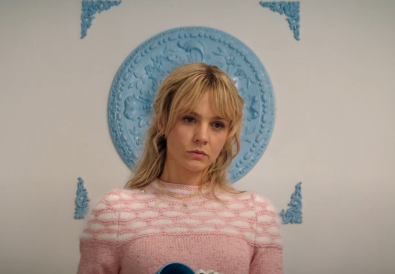