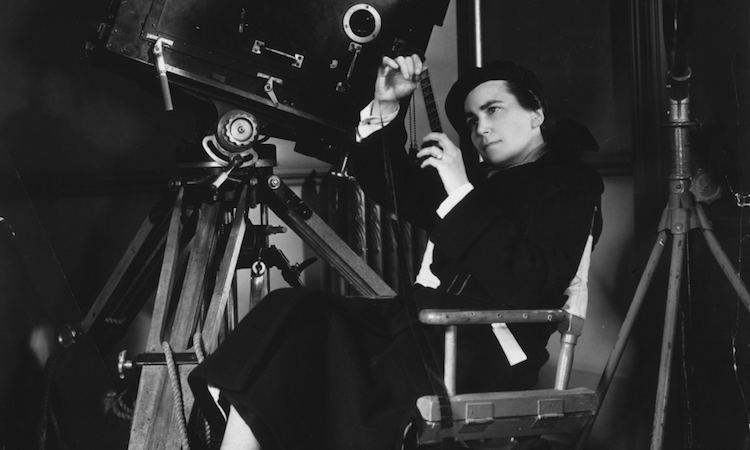 Director Dorothy Arzner was the only female director in Hollywood’s Golden Age. According to IMDb, from 1928 to 1943, she directed 20 films. An article written by Allyson Nadia Field for the Women Film Pioneer Project says, “Dorothy Arzner remains the most prolific woman studio director in the history of American cinema. She has received significant scholarly attention from feminist film critics and queer theorists who have been interested in this pioneering filmmaker both for her body of work and for the critical possibilities suggested by feminist approaches to reading that work as a whole.” Arzner wasn’t only a director, but a writer and editor. Arzner has her a post-mortem star on the Hollywood Walk of Fame. She has helped build the careers of iconic film stars in Hollywood, such as Katherine Hepburn’s and Lucille Ball’s.

Among her many films was the comedy/drama, Merrily We go to Hell, made in 1932. Although this film is 88 years old, it has the makings of a modern-day situation: drama, lies, lust, revenge, and adultery. This film is timeless despite it being almost 90.  (SAT:4.5/5)

An alcoholic writer, “Jerry Corbett” (Fredric March), falls in love and marries an heiress named “Joan Prentice” (Sylvia Sidney). Jerry then starts an affair with his ex, the actress “Claire Hempstead” (Adrianne Allen). Jerry meets Joan at a party and is smitten with her despite his drunkenness. She notices that he drinks consistently throughout their initial meeting. As he makes each drink—her face says it all—she’s intrigued by him but cautious. The way March plays the role is with great finesse, especially when he’s drunk. But alcoholism isn’t a laughing matter. Alcoholism is the reason for his tumultuous marriage, extramarital affair, and a possible end to his marriage. However, when he’s sober, his marriage is happy, and his career is thriving.

Jerry goes from an average newspaperman to a successful playwright. However, Claire—the ex—is cast to play the lead role through no control of his own. While Joan is a supportive wife and tries to help Jerry stay sober, Claire is an enabler. There is one scene where Claire and Jerry talk about a part in the play. The defeat in his face is evident as he takes a drink for the first time in weeks. Joan’s heartbreak in her face as he takes the first sip is evident.

Joan and Clair are opposites, and they fuse well together. Joan is the sweet and devoted wife who tries to keep Jerry on the wagon. Claire is the home-wrecking vamp who oozes sex and seduction. She’s simply a trigger for Jerry’s lousy behavior. Allen portrays the role of Claire as the girl you love to hate. I appreciated that she isn’t the stereotypical ditzy blonde. She’s bold and takes what she wants, even though that specific something is a married man.

The play is successful. When Joan runs backstage to congratulate Jerry, he calls her “Claire.” Whether or not he’s too drunk to see or he had Claire on the brain at that particular time is unclear. Jerry is intoxicated when taking his bow. He comes home hours later, drunker. As Joan undresses him, he calls her “Claire” again.  She pulls back with a horrified and disgusted expression. Once Jerry is conscious, he admits he’s going to see Claire unless she stops him. He begs her to lock the door. Instead, she kicks him out. Afterward, she leaves the room sobbing.

Jerry returns home the next morning only to meet a “modern wife.” Jerry thought she’d leave him because of last night. Joan replies, “Don’t be silly. The way you talk, one would think we’re living in my grandmother’s day.” The interaction between the two actors is too rehearsed and lacks emotion. But Joan’s statements resonate today. “I spent the morning realizing we’re living in a modern world. That there’s no place for old-fashion wives. You seem to want a modern wife, that’s what I’m going to be. You see, I’d rather go merrily to Hell with you than alone.” Jerry assumes that she’ll stay faithful. But, she says, “if being a modern husband gives you privileges, being a modern wife gives me privileges.” He still doesn’t take her seriously until she tells him she has a lunch date with one of his friends, “Charlie Baxter” (Cary Grant). He walks away. Some may call Joan’s actions vengeful. Others may call it karma. Either way, it’s undoubtedly forward-thinking for the times and entertaining.

The title echoes throughout the film, making the quip a little hammy. But, it adds a bit of lightheartedness to an otherwise dark plot.

Q: Does Merrily We go to Hell pass the Bechdel-Wallace test?

by Stephanie A. Taylor August 31, 2020
Stephanie A. Taylor is an award-winning journalist living in Chicago. She's been with FF2 since 2016. Her niche is women's issues. Her favorite articles she's written are: Women in media facing sexism, exclusivity, Pulchronomics plays prominent role with women in media and her interview with Danièle Thompson, French director of Cézanne and I (Cézanne et Moi.)
Previous Post Next Post