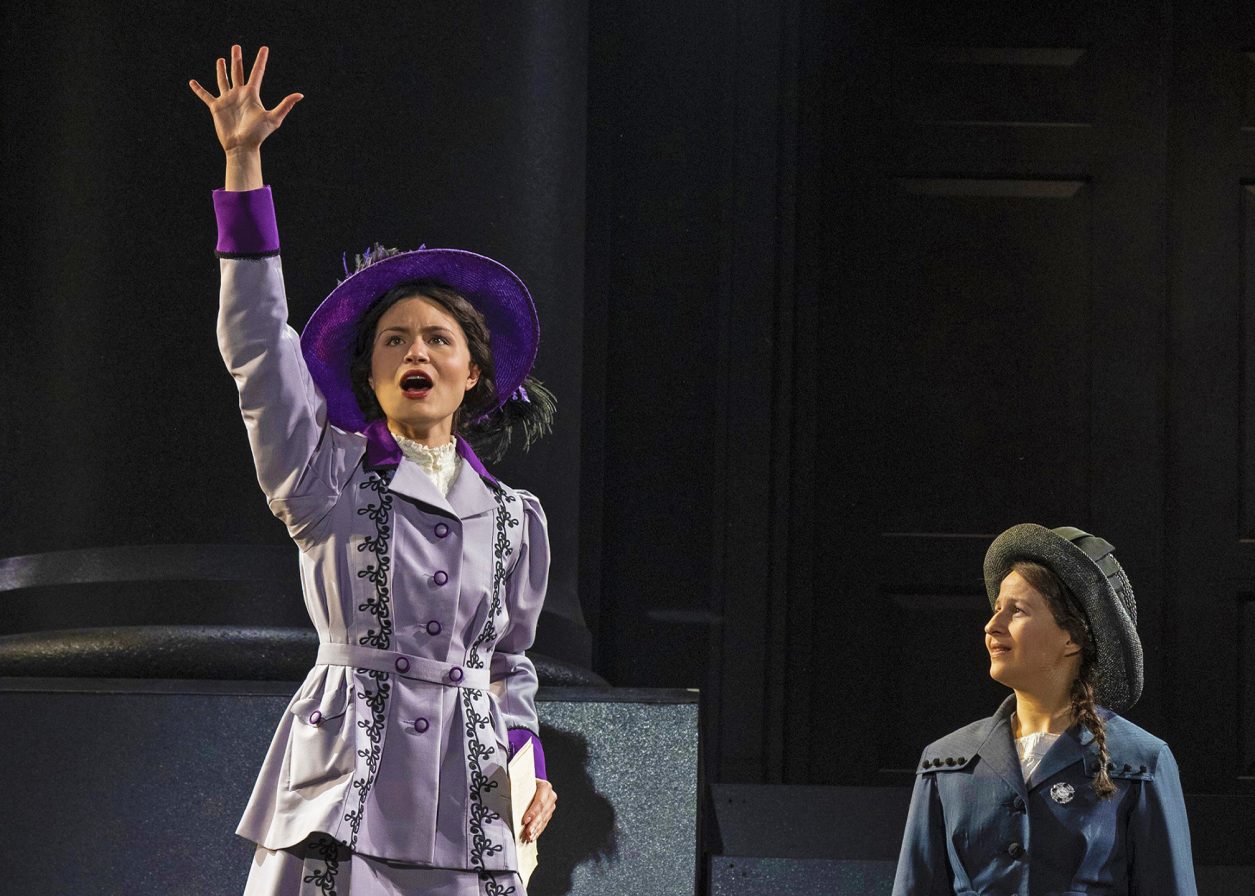 “How long must women wait for liberty?”

These words are the last words spoken by pioneering feminist Inez Mulholland before collapsing onstage in the new musical Suffs, which just ended its historic and widely-covered run at The Public Theatre (one of NYC’s most prestigious Off-Broadway venues) on May 29th.

These words are printed on the signs of the suffragists who stand as silent sentinels outside then-President Woodrow Wilson’s White House. And these words are now leaping from a lyric in Suffs to a rallying cry in the build-up to America’s 2022 midterm elections, as a new generation faces the imminent prospect of a rollback of rights supposedly won by the Second Wave Feminists of the 1970s.

Written and conceived by Shaina Taub, Suffs tells the story of the struggle to pass an amendment to the U.S. Constitution establishing the right of American women to vote in national elections. The idea came about when Rachel Sussman – one of the producers of the Pulitzer Prize-nominated play What the Constitution Means to Me – read Doris Steven’s Jailed for Freedom, and then planted the idea in Shaina’s mind that the suffragist movement should be the topic of her next musical.

Shaina herself plays the venerable Alice Paul in this production, and is joined by a cast comprised of entirely female-identifying and non-binary individuals.

In the course of its all too brief run at The Public, Suffs was seen by many very famous women (including Hillary Rodham Clinton, Dolores Huerta, Alexandra Ocasio-Cortez, and Gloria Steinem). Me? I was one of the non-famous people who also had the privilege of seeing it for myself.

And afterwards, I had the immense pleasure of sitting down with Ada Westfall – one of the actors in the piece – for an insider’s view of Suffs’ journey from page to stage, as well as the dramatic current events occurring in parallel as the cast members squared their shoulders and marched through their daily performance schedule.

Here is my summary of some highlights from Ada’s first-person account:

“It took tenacity across generations of women to get the 19th Amendment passed in 1920, the things that they went through, and the sacrifices they made,” Ada told me, as she described the hurdles that it also took to get Suffs in performance. Shaina set out to write “the kind of musical that she wanted to see as a kid… Musical theatre has the capacity to serve as a piece that ignites interest and understanding in young women and its importance stems from the story reaching a large audience every night.”

When Shaina approached Ada about playing the part of Mrs Herndon this project, she immediately said yes. “This was a particularly special moment for me because I transitioned at 30… To have someone call me up and say ‘We want to cast you in an all-female cast that tells the story of women getting the right to vote’ was a huge honor. It also felt like a big challenge. It felt daunting.” The privilege of being able to tell this story is not lost on her.

Having no prior knowledge of Inez Mulholland, Alice Paul, Ida B. Well or their stories, Ada went on a journey during the rehearsal process of learning about the road to suffrage. Ada remembered the name Susan B. Anthony, but her history classes in school had barely skimmed the surface of the women’s suffrage movement. The story as told was so brief that it was if, one day, the American government decided that an entire demographic should get a basic right – long withheld – out of default and charity.

Ada was not alone in this lived experience. Asking around, she learned that most of the other cast members had also learned only the most basic of basics: “They were called the suffragists. They protested. They got the right to vote.”

But on Monday, May 2nd, women all across the USA learned a shocking truth about rights supposedly long secured when Politco (an online news and information service) released a leaked copy of a draft opinion by Supreme Court Justice Samuel Alito striking down the landmark Roe v. Wade decision that had guaranteed American women the right to abortion since 1973.

The very next day – Tuesday May 3rd – Shaina reached out to the company of Suffs to gauge interest in performing at a demonstration in Manhattan’s Foley Square. “What’s really incredible about Shaina as an artist is that Shaina has always had social consciousness and activism centered in her practice,” Ada told me. “In the musical, our cast mocks protests in the fight for the right to vote, but now we had the chance to stand in protest for actual social change.”

This parallel process feels even more apparent in the song that they performed at the top of the rally titled “How Long.” This sentiment rings true for both the suffragists of the late 19th and early 20th Centuries, as well as in the present day as women once again fight for their rights.

Surrounded by the show’s stage management team (who help to keep everything organized), the members of the Suff’s cast who were able to gathered at Foley Square that night and sang acapella in front of a crowd larger than the ones they perform for at The Public every night. Ada remembers seeing a person holding a white sign with black capital letters reading “We refuse to let the Supreme Court deny women’s humanity and decimate their rights.” This directly echoes the signs that the cast holds in the play. (See link to YouTube clip from Foley Square below.)

More parallels. In the show, Ada holds an effigy of President Wilson that is then symbolically burned. At Foley Square, protesters waved paper cut outs of the heads of conservative Supreme Court justices. Ada recalls that taking the song “How Long” out of the context of the show and putting it in the context of current events “was so eerie and overwhelming and made me feel incredibly proud to be doing what I was doing.”

On the way back to The Public, Ada and her fellow cast members noticed how the steps of the Thurgood Marshall United States Courthouse across from Foley Square – with its towering columns – mirrored the set of their own show. A couple of hours later, Ada and the cast of Suffs would sing the song “How Long” in the context of the show having felt, seen, and witnessed the proceedings of the demonstration.

According to Ada, that night – the night of May 3, 2022 – the palpable energy of the audience reverberated through the walls of the Newman Theater, making Suffs feel electric. Ada exclaimed that the whole experience: “Awakened a sense in me about why art is so deeply linked to protest and to social movements.” 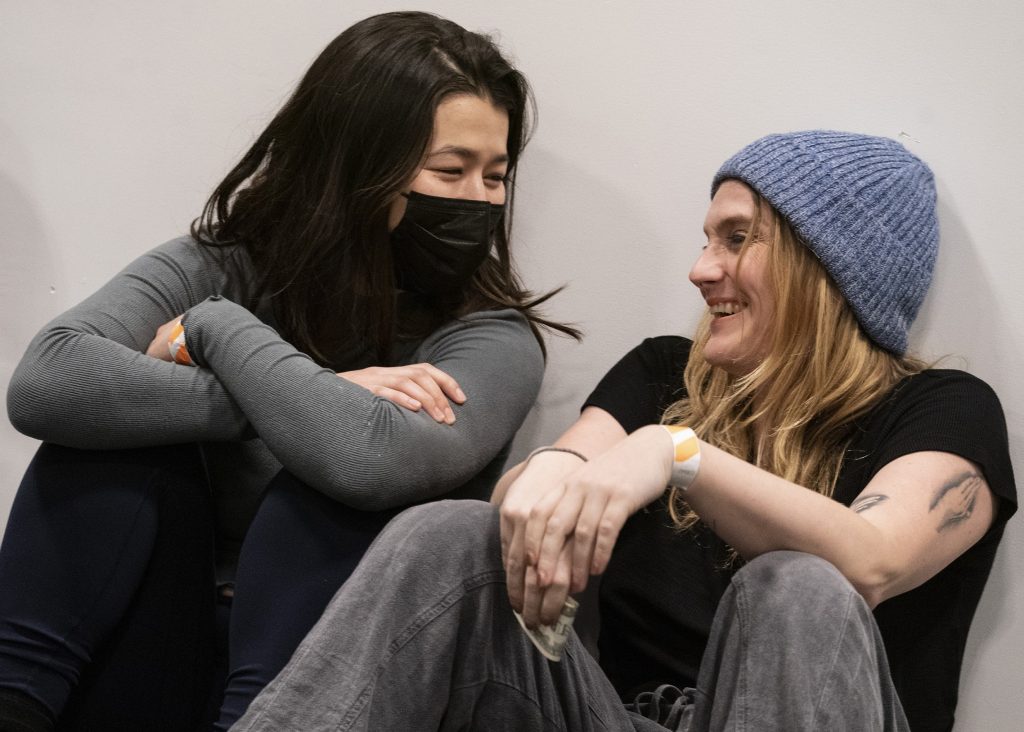 Watch the cast of Suffs perform “How Long” in Foley Square on Tuesday May 3rd.

Visit Ada Westfall’s website. Ada describes herself as “a writer, composer, multi-instrumentalist, performer, and proud transgender woman whose mission is to disrupt, interrogate, and diversify the canon, trends, and methodology in the field of music as it intersects all types of performance and the collaborative arts at large.” She played the character “Mrs. Herndon” in Suffs.

Read more about Jailed for Freedom: American Women Win the Vote by Doris Steven, the book which provided the original source material for Suffs.

Read this 6/3/22 Tweet from Shaina: While our acclaimed world premiere production at The Public has come to an end, the work is never over and it can’t be done alone. Join the movement and be the first to know what’s on the horizon for SUFFS. Join the #SuffsMusical movement: sitch.co/suffs

Used with the permission of The Public Theatre. All Rights Reserved.

NYC-based actor/singer Taylor Beckman graduated Summa Cum Laude from Muhlenberg College with degrees in Theatre and Psychology. She was fortunate enough to study in Arezzo (Italy) her junior year where she took classes in physical theatre, voice, and commedia dell’arte. Then she spent 2 years after graduation as a member of the Pickles Theater Company traveling all over France and Belgium. Post-pandemic, Taylor is now back in Brooklyn working towards a Master of Arts degree in Drama Therapy at Steinhardt School of Culture, Education, and Human Development at NYU. Visit her website Taylor Helena Beckman for headshots, YouTube clips, and contact information. 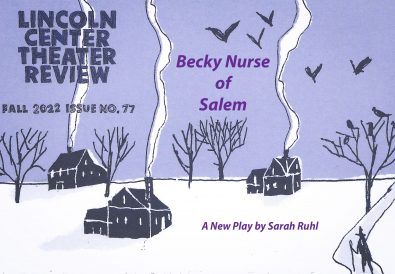 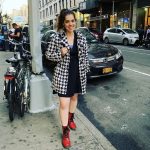 by Taylor Beckman June 6, 2022
Taylor Beckman (she/her/hers) is a sister, daughter, friend, avid baker, and adorer of Regency-era British television shows. After graduating from Muhlenberg College with degrees in both Psychology and Theatre (acting and directing concentrations), she flew to Europe where she performed as a theatre artist, teaching English in Belgium and France. Once she returned to the States, Taylor pursued a career in acting until the pandemic happened and she changed the trajectory of her life. Taylor is now a student at NYU getting her Masters in Drama Therapy where she hopes to combine her love for theater with the inherent therapeutic qualities that stories possess. When she isn't writing theatrical reviews or profile pieces for FF2, Taylor can be found drinking mint tea and reading a Charlotte Brontë novel. Thank you to Jan and the FF2 Media team for the opportunity to critically engage with people and the art form of performance.
Previous Post Next Post