The Namesake is the rare case in which both book and film are equally strong and their differences actually complement each other. The voice of the novelist and the eye of the filmmaker are in perfect sync, and the casting is perfect. Whereas Lahiri’s novel focuses on American-born Gogol, Nair embeds Gogol’s story within a Ganguli family saga told primarily from the POV of Gogol’s mother Ashima (Tabu)—an archetypal female immigrant.

The Namesake opened in the U.S. on March 9, 2007. It won Mira Nair the top prize at a Bulgarian film festival and was nominated for awards at the Independent Film Awards, the Gotham Awards and from the Casting Society of America. (JLH: 4.5/5)

Mira Nair burst onto the international film scene in 1988, the year her first feature film, Salaam Bombay! was released.  The applause was deafening.  Bombay won five awards, including the prestigious Golden Camera award from the Cannes Film Festival jury.  The folks giving out BAFTA, Cesar, and Golden Globe awards all nominated it for “Best Foreign Language Film,” and then it received the ultimate honor: an Oscar nomination.

Heady stuff, and after Bombay, Nair (rhymes with “Fire”) made seven more feature films (including two for American cable television) racking up an almost uncountable number of nominations from critics, guilds, and audiences alike.  Having seen them all, and loved them all, I can say without reservation that The Namesake is Mira Nair’s best film to date. Jhumpa Lahiri’s best-selling novel is the perfect vehicle for Nair, allowing her to explore with exquisite intensity the two themes that have most marked her career: the lessons to be learned from arranged marriages, now that Hollywood has commercialized romantic love; and the search for “home” in an ever-flattening world.

Lahiri’s novel (also called The Namesake) is the story of Gogol Ganguli. Gogol enters the world on the first page, and he’s alone with his thoughts on the last page. Gogol is an East Coast kid: born in a Cambridge, Massachusetts hospital, raised in a Boston suburb, graduating from Yale University in his teens and settling into professional life in Manhattan as a young adult.  Although Ashima Bhaduri and Ashoke Ganguli, Gogol’s mother and father, are essential characters, the novel is equally concerned with Gogol’s romantic coming-of-age: his first infatuation (with Ruth), his first committed relationship (with Maxine), his first casual affair (with Bridget), and his first marriage (to Moushumi).  He’s a type Lahiri presumably knows very well: a self-described ABCD or “American-Born Confused Deshi.”  (Although she was born in London, Lahiri grew up in Rhode Island.)  It’s the brilliant work of a talented young woman just entering full adulthood.  (Lahiri married in 2001 and her first child was born in 2002.)

Nair’s film, by contrast, is the work of a mature woman, twice-married and the mother of a teenager.  She’s embedded Gogol’s story within a Ganguli family saga: Ashoke now opens the narrative and Ashima closes it.  Since it’s no longer told in flashback, the details of their arranged marriage have more immediacy, and we get to know them as they are getting to know each other.  Their early years in America are filled with longing for India, and their days and nights are punctuated with phone calls from and visits to Calcutta.  Bundled up against a cold their relatives will never fully appreciate, they send letters and pictures “home,” until, eventually, as year follows year “home” becomes their house on Pemberton Road.

Sophisticated film lovers no longer insist that an adaptation be completely faithful to its source. We now recognize that sometimes the film is actually better. (The Devil Wears Prada is a recent example.) The Namesake is the rare case in which book and film are equally strong, and their differences actually complement each other. With Gogol as her focal point, Lahiri works out into the wider world, whereas Nair focuses on Ashima and Ashoke and works inwards. In both cases, youthful experiments are counterpointed with middle-aged accommodations.

The voice of the novelist and the eye of the filmmaker are in perfect synergy. In scene after scene, Nair creates iconic images that depict intense emotions. Facial expressions, subtle gestures, and even pieces of furniture all capture the ineffable. Before they’ve ever made eye contact, Ashima sees Ashoke’s shoes, and the tiny moment in which she daringly slips her feet into them resonates throughout the entire film. Yes, the novelist has described these shoes in detail, but it is the filmmaker who shows us how well they fit. They’re big, of course, but not too big. These shoes, on Ashoke’s feet, will take Ashima to America, and she immediately senses that they will protect her without overwhelming her. 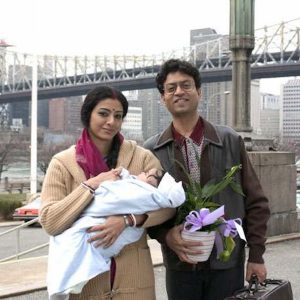 The casting is also perfect: Ashima (Tabu) is a luminous beauty, whereas Ashoke (Irrfan Khan) is a sweet-faced geek. Kal Penn, who starred in Harold & Kumar Go to White Castle, its sequel and the hit TV series “House”) brings a comic touch to his performance as Gogol that helps the filmmaker age him from 15 to 30.  Jacinda Barrett, who played a similar role to great effect in The Human Stain, is lovely as Max, and Zuleikha Robinson, alluring in Hidalgo, is ravishing here as Moushumi.

His palette deftly differentiates the past (with its golden memories and blood-tinged nightmares) from the present (with its lonely moments and communal rights of passage). Nair and Elmes even give us a tour of the inner arches of the Taj Mahal, finding intimate angles just a sbeautiful as the grand picture-postcard entrance.

For more than 40 years, male critics have described the musical Fiddler on the Roof as “sentimental,” always assuming that Fiddler was primarily targeted at Jews pining for Anatevka; but Jews are not the world’s only exiles. Audiences everywhere have embraced Fiddler. It was, for example, as popular in Japan as it was in Israel. Like the Fiddler team, Nair and screenwriter Sooni Taraporevala are eloquent students of diaspora. Just as Tevye, the father figure in Fiddler, is expelled from Anatevka, Jay, the father figure played by Roshan Seth in Nair’s 1991 film Mississippi Masala, is expelled from Uganda. But Ashima is like Tevye’s daughter Hodel; she makes a conscious choice when she leaves Calcutta.  The dilemma first articulated in the lyrics Sheldon Harnick wrote for Hodel (“Far From the Home I Love”) has now achieved its poignant realization in The Namesake.

Invocations of the goddess Saraswati open and close Nair’s film, reminding us that human life is both eternal and evanescent: home is a place we hold sacred in our hearts, but it is also the place where we put on our shoes each morning to greet the new day.

Our thanks to the editors of The Digital Filmmaker for granting permission to repost this review. 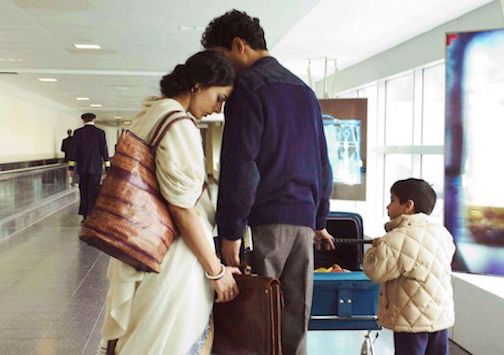 Top Photo: Tabu as “Ashima” and Irrfan Khan as “Ashoke.”

Middle Photo: Tabu as “Ashima” and Irrfan Khan as “Ashoke.”