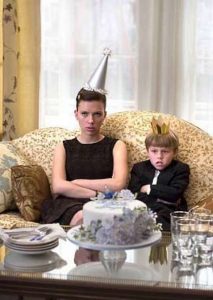 Fantasy and reality collide when Annie, a working class girl fresh out of college (Scarlett Johansson), starts working as a nanny for the upscale Mrs. X (Laura Linney).

Many critics are comparing The Nanny Diaries to The Devil Wears Prada which featured another spirited young woman making her way in New York’s upper ranks.

The Hot Pink Pen shows how these two romantic comedies offer insights about the limited options that so many women still face. (JLH: 4/5)

In a summer filled with sequels, The Nanny Diaries is being marketed as a follow-up to The Devil Wears Prada. That’s either a good thing or a bad thing depending on your point of view. Cards on the table: I thought The Devil Wears Prada was far and away one of the best films of 2006. Having spent almost twenty years of my life working for top-tier consulting firms, I felt the ring of truth in every scene; no film had ever gone as far in depicting the life of a high-powered, successful businesswoman, and those few that had tried (e.g., The Business of Strangers, The Candidate, Working Girl, etc) all paled in comparison. (Links to my Prada review and interview with the screenwriter are at the end of this article.)

Both films use “RomCom” conventions (that’s Hollywood-speak for “Romantic Comedy”) to tell subversively feminist stories, but after that they’re very different. Prada was a high-energy treat about two ambitious and quick-witted winners. Nanny, on the other hand, is a more downbeat tale in which two women find themselves making compromises that lead them both to grief. People who missed all the subtext and thought Prada was just a fluffy chick-flick are likely to find Nanny tough going.

When “Annie Braddock” (Scarlett Johannson) begins her narration, she’s upfront about the fact that her relationship with her employer “Mrs. X” (Laura Linney) will end traumatically, and one of the story’s conceits is that she’s calling her “Mrs. X” to protect her identity. Annie first shows herself at her college graduation, receiving a degree in Business from “a good state school” (Montclair State University in northern New Jersey). Her mother “Judy” (Donna Murphy) is in the audience applauding. Judy is a hard-working single mother who’s pulled extra shifts as a nurse for years to give her daughter more options than the ones she had growing up. But that’s exactly Annie’s problem: while she knows she has lots of options, she has no clear sense of who she is and what she wants. Consequently, when she gets the question “Who is Annie Braddock?” during her interview for a prestigious internship on Wall Street, she panics. “I have no idea,” she mumbles and then she runs away.

Alone in Central Park, contemplating a future as a bag lady, Annie meets with “Grayer X” (Nicholas Reese Art) the adorable son of an incredibly elegant and sophisticated woman who seems just a bit too old to have such a young child. Mistaking the name “Annie” for the word “Nanny,” this glamorous woman, Mrs. X, instantly begins pressuring Annie to come work for her. Annie’s head fills with Disney music “(“Chim Chim Cher-ee” from Mary Poppins), and in one of the film’s most lyrical moments the big red umbrella lifts itself off the side of the Traveler’s Insurance building and carries Annie aloft, easing her out of her working class suburb and depositing her on Manhattan’s Upper East Side.

The imagery is seductive, but it has a sharp edge. The first Mary Poppins book, published in 1934 in the middle of the Great Depression, was set in 1910, during the idyll of peace and prosperity that preceded World War I. Disney’s movie version was originally released in 1964, the period of relative peace and great prosperity that preceded the Feminist “Second Wave.” So instead of owning her choices, Annie’s fantasies show her willfully embracing childhood, and traveling back to a time when most women had few choices, if any at all.

But as soon as she’s actually taken up residence in the X’s deluxe apartment, Annie is back in the 21st Century again. Mrs. X, who graduated from Smith College and once ran one of New York’s most prestigious art galleries, is now completely financially dependent on Mr. X (Paul Giamatti), and he knows it. As he torments her with barely concealed extra-marital entanglements, she begins to realize that her entire lifestyle is more ephemeral than, well, a spoonful of sugar. Having no one she can trust with her secrets, Mrs. X draws Annie ever deeper into this quagmire by default. Everyone she knows urges her to quit, but Annie is steadfast. Annie grew up without a father, so she wants Grayer to have the intact family she’s always longed for. Annie watched her mother live the life of an economically-stressed divorcee, so she participates in Mrs. X’s increasingly desperate attempts to save her marriage. Besides, bad as it all is, she enjoys having bed, board, and a bit of pocket cash on the posh side of the Hudson River. When the inevitable blow-up finally occurs and Mrs. X ejects her, Annie is stunned.

Johannson plays Annie as someone who’s always in a bit of a fog, and Linney’s Mrs. X dominates her so forcefully that it’s easy to hate this character and deny her a valid point-of-view. But Mrs. X represents every talented, accomplished, and extremely well-educated woman who finds herself trapped in a bad marriage after the spouse who was once her peer becomes her sole source of income. Second Wave Feminists like Linda Hirschman (and me) really worry about the Mrs. X’s of the world. We’re equally concerned about young women like Annie who are so overwhelmed by options (options that we, like Judy, fought for) that they retreat into childlike fantasies. And we’re fearful of the lessons learned by boys like Grayer, catered to by a series of pliant, accommodating, essentially-voiceless and seemingly-interchangeable women (who disappear at random, probably through no fault of their own).

Furthermore the screenplay, like the source novel before it, hammers home the greatest irony of Annie’s position: Annie is the lucky one. Her nanny gig is probably just a temporary job for her, but it’s a lifeline for the other nannies she encounters. Most of them have children of their own, but they rarely get to see them, let alone nurture them. These children don’t live in fancy apartments; they live in third-world backwaters on the money their mothers send home to them. Remember “Nanny-Gate,” the 1992 scandal that forced Zoë Baird (Bill Clinton’s first Attorney-General nominee) to withdraw from the limelight? Nannies, as a group, are underpaid, overworked, and denied almost all of the regulatory protections the rest of America’s workforce takes for granted. (The envelope Annie opens on the ferry contains cash. Cash! When no tax dollars go in, no unemployment or social security checks come out…)

Here’s what The Devil Wears Prada and The Nanny Diaries have most in common: both films breathe life into the irrefutable fact that, despite a century of activism, this is still “a man’s world.” The women who live in it do not have equal options, they do not get equal pay for equal work, and the ambitious among them rarely have spouses who fully support their career aspirations. Few men, at any level of our society, feel required to share the domestic workload, in fact, the more prosperous they are, the less likely they are to “help out” at home. Forty-four years after Betty Friedan first published The Feminine Mystique, household management is still considered “women’s work.” (A subtle point: In the film, Mrs. X is a graduate of Smith College, just like Betty Friedan, but the novel’s Mrs. X doesn’t have such a fancy pedigree. Is this intentional or just delicious accident?)

Stories about women are a hard sell these days and downbeat stories are almost always box office failures. So when talented filmmakers like Shari Springer Berman (and Prada’s screenwriter Aline Brish McKenna) pitch feminist messages camouflaged as “RomComs” the least we can do is buy our tickets and laugh through our tears. After all, better these stories, with their kernels of truth, then no stories with women protagonists at all.

I’d rather you see the film and decide for yourself, but if you want my answer, here it is: Mrs. X fires Annie as soon as she realizes that Annie is having an affair with “Harvard Hottie” (Chris Evans), the young man who lives on the 12th floor of her apartment building. Mrs. X immediately assumes that Annie is crying on his shoulder and telling him way too much about the goings-on in the X apartment. Furthermore, she has every reason to believe that HH will spread the juicy bits around; what’s merely idle gossip for HH is life and death to Mrs. X. Middle Photo: Scarlett Johansson as “Annie” and Chris Evans as the “Harvard Hottie.”