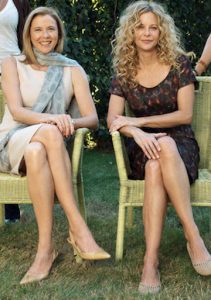 Fortysomething years of frenetic activity come to a screeching halt one day when “Mary Haines” (Meg Ryan) inadvertently learns that her husband Stephen is having an affair.  Retreating from men, Mary reaches out to an already large and rapidly expanding support network.  Old friends offer advice, and new friends provide consolation, but in the end Mary comes to see herself anew as the daughter of her mother and the mother of her daughter.

Writer/Directed Diane English and her megawatt cast transform an estrogen-rich confection from a cold satire into a warm dramedy.  Opens nationwide on Friday, September 12, 2008. (JLH: 3.5/5)

Diane English’s new adaptation of the Depression-era classic The Women is a huge ensemble piece with megawatt star power; counting up the Oscar, Emmy, and Golden Globe nominations of all the cast members would likely take hours.  Skinny cappuccino in hand, I settled into my seat in the Chicago screening room, more than happy to just sit back for 114 minutes and watch these ladies strut their stuff.

The plot of The Women swirls around the character of “Mary Haines” (Meg Ryan), a carefully raised girl from a wealthy family.  When the story begins, she’s reached the middle of her life, as if flown in on a magic carpet.  She has soared above all pain and privation, convinced that she is now artfully balancing all expectations: daughter, wife, mother, friend, employer, society hostess, clothing designer – is there anything Mary can’t do?  Obviously Humpty Dumpty sits poised on the wall, just about to have her big fall!

Fortysomething years of frenetic activity come to a screeching halt once Mary inadvertently learns that her husband Stephen is having an affair with a gorgeous woman selling luxury perfumes at the Saks flagship store on Fifth Avenue.  Thinking back on all the late nights at the office, the sudden cancellation of a long-planned vacation, etc, Mary realizes that her husband had long since disengaged, but she didn’t want to face it.

Then another crisis: her father calls, and she walks straight into a second buzz saw.  Of course she’s furious, but she hates herself just as much as she hates them.  Betrayed by the two most important men in her life, the two men who previously protected her both emotionally and financially from all mundane concerns, Mary starts asking herself all the questions she’s always avoided, starting with the most obvious two: “Who am I?” and “What do I want out of life?”

Carrie Fisher, Joanna Gleason, Eva Mendes, Debi Mazar, Debra Messing, Jada Pinkett Smith, and Lynn Whitfield—beloved actresses all—parade across the screen.  And they each get well-balanced scenes and nicely defined arcs, even though many of their parts, by necessity, are quite small.  (Note that The Women has an all-female cast with no male speaking parts.)  But in the end, the most touching moments in The Women are firmly grounded in Mary’s two most primal relationships: with her mother “Catherine” (Candice Bergen) and her daughter “Molly” (India Ennenga). 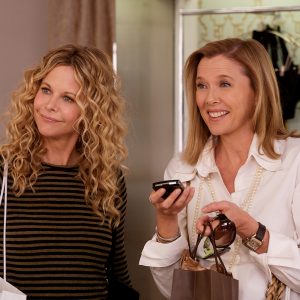 Whereas most “prick flicks” focus on superheroes endowed with extraordinary powers, most “chick flicks” are about real women trying to lead balanced lives.  The Women literally asks us to walk in a few new pairs of shoes for a bit, and just to make sure we get it, when we walk through Saks with Sylvie, her designer sunglasses feed us data (as if she were Arnold Schwarzenegger’s “Terminator” searching for Sarah Connor).  A few scenes later, Sylvie gives these same glasses to Molly.  Get it?  English is daring us to trivialize the very real joys and sorrows of Mary’s life just because she has a lovely home in Connecticut!  By what right, she asks, do filmmakers elevate mayhem above the mundane?

With all the hoopla surrounding the huge success of Sex and the City earlier this summer, it’s inevitable that most critics will compare these two films.  But while Mary’s gal pals are a crucial component of her psychic equilibrium (thereby making SATC a legitimate source for comparison), I think The Women is after something very different.  As the narrative unfolds, Mary has occasion to see herself anew as the daughter of her mother and the mother of her daughter.  What has she learned from her mother?  What is she teaching her daughter?  Transforming an estrogen-rich confection from a cold satire into a warm dramedy, English and her cast help us see that, in the end, these are the two questions by which this Mary Haines will ultimately judge her own life.

Bottom line: I laughed (a lot), I cried (a little), and then I tossed my empty cup and left the screening room with a smile.

Truth be told, I’ve never been a great fan of Clare Boothe Luce’s version of The Women. I can’t say exactly when I first saw George Cukor’s first film adaption from 1939 (starring Norma Shearer as “Mrs. Stephen Haines,” with back-up from another stellar cast including Joan Crawford, Joan Fontaine, Paulette Goddard, Marjorie Main, and Rosalind Russell), but I saw it several times long ago, and I recently saw a revival of the original stage version from 1936 (starring Cynthia Nixon as “Mary”).  So I went into Diane English’s version curious to see how she would update something I definitely consider “a period piece.”  (For example: what to do with the dude ranch?   Oy!)

A few facts about Clare Boothe Luce from her New York Times obit (written by Albin Krebs and published on October 10, 1987):

“Clare Boothe was born in New York City on April 10, 1903, the daughter of William Franklin Boothe, a pit orchestra violinist and sometime businessman, and the former Anna Clara Snyder, who had been a chorus girl… Her parents separated when Clare was eight years old. She was brought up in genteel poverty by her mother…

In 1919, her mother married Dr. Albert Elmer Austin, a prominent physician in Greenwich, Conn…  In church, Clare Boothe met her future husband: George Tuttle Brokaw, millionaire-playboy son of a clothing manufacturer. They married in 1923 in a wedding called ‘the most important social event of the season.’ It was not to last. Mr. Brokaw, 23 years older than his bride, was a heavy drinker, according to one of his biographers, and he was prone to abuse his wife. After six years of marriage she won a divorce on the grounds of mental cruelty… Declining to rest on her money, Clare Boothe importuned a society friend, Conde Nast, publisher of Vogue and Vanity Fair, for a job…  She became managing editor [of Vanity Fair]… She left in 1934.”

A few subsequent details from Wikipedia: She married Henry Luce, founder and publisher of Time magazine on November 23, 1935.  The original Broadway production of The Womenopened on December 26, 1936, and even though it was received “coolly by critics,” it was “immensely popular with the public,” running for 657 performances.  By the time of her death in 1987, Clare Boothe Luce had added war correspondent, Congresswoman, and Ambassador to her astonishing list of accomplishments.

So without dwelling on psychobiography, let’s just say Clare Boothe Luce had plenty of reasons to distrust men, nevertheless achieving a level of success than left her mother’s considerable skills as a social climber in the dust.  Although most people see satire when they watch original versions of The Women, I see Clare Boothe Luce’s gritty determination to carve her own destiny, coupled with the self-disgust that resulted from doing what she had to do to get where she wanted to go.  The bitter aftertaste always leeches through the frothy surface.

If you haven’t seen the ’08 version of The Women, please DO NOT read further!!

Most of the characters in the ’08 version have 36/39 counterparts, but in each case their personalities are extremely different.  The most significant change transforms Rosalind Russell’s “Sylvia” into Annette Bening’s “Sylvie.” While these two characters perform many of the same plot functions, Sylvia is just a gossipy bitch whereas Sylvie is literally tangled up in good intentions.  Sylvie’s reward is her relationship with Molly (which creates the opportunity for her eventual reconciliation with Mary).  Sylvia’s arc ends in ostracism and marital misery.

Mary’s mother and daughter are both very minor characters in the original.  The name “Molly” is new; in 1939, actress Virginia Weidler was called “Little Mary.”  The name “Catherine” is also new; in 1939, actress Lucile Watson was simply called “Mrs. Moorehead.”  There was absolutely no relationship between Sylvia and Little Mary in ‘36 or ‘39, and I think adding one in the ’08 version is a very nice touch.

In ‘36 and ‘39, Crystal marries Stephen and then has an affair with one of the other husbands, making her not just a bitch but a tramp.  This original Crystal came of age in the middle of the Great Depression, so many women in the audience would have admired her ferocious survival skills, even while applauding her comeuppance.  Although he’s never given the chance to speak for himself, the Stephen of 36/39 presumably comes crawling back to Mary after Crystal publicly humiliates him.  When they remarry, setting their social world right again, neither will ever acknowledge what they both surely know: Stephen is the one who’s lost the most face in their set.

In ’08, Crystal and Stephen start living together, but they never marry and Crystal has no additional entanglements.  The ’08 Stephen wants to come home because life with Crystal is boring.  Stephen is an ambitious man, and Mary seduces him anew with the big buzz surrounding her new company—the company financed by Catherine.

Do I need to say there were no women of color in the ‘39 version?  How wonderful to have self-possessed characters like those played by Eva Mendes, Jada Pinkett Smith, and Lynn Whitfield now!  On the other hand, I love the fact that two Jewish women play transformative figures in both depictions of this mostly WASP-world.  Paulette Goddard was “Miriam Aarons” in ’39, and Bette Midler is “Leah Miller” in ’08.  Besides giving her an easily decoded name, there’s nothing especially Jewish about “Miriam Aarons,” but I like the fact that English honored this element.

Finally: the fashion show!!!  George Cukor’s 1939 version of The Women was filmed in lustrous black and white, but midway through there’s a Technicolor fashion show!!!  Just like when Dorothy wakes up to find herself in Munchkinland!!!  (Yup, The Wizard of Oz was also released in 1939.)

Maybe there really were women in 1939 with sufficient cash and courage to both buy and wear these clothes.  Probably some women now buy and wear the things they see on SATC (or knock-offs thereof).  Frankly, Carrie’s outfits always repelled me.  Since I’m no fashionista, maybe this is a bad sign, but I would happily wear several of the items in Mary’s new collection.  If this film is a box office success, maybe I’ll even get that option!
(written after watching the ’39 version again on DVD) 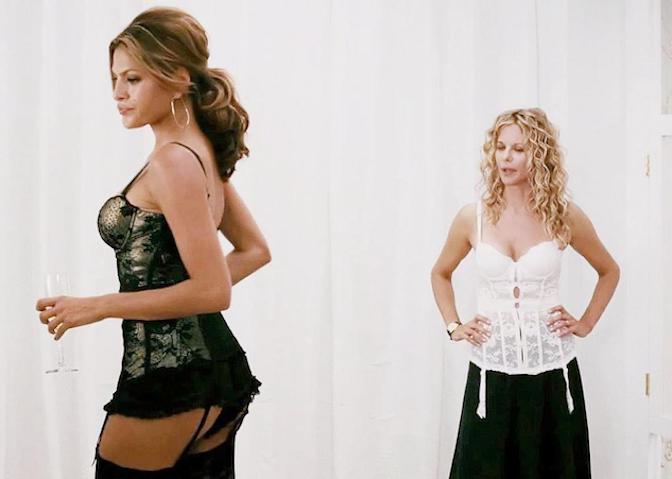