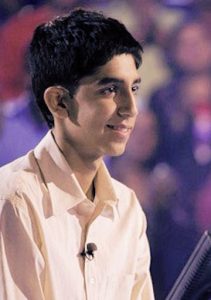 Slumdog Millionaire is the first great film of the new “flat world.” “Jamal” (Dev Patel), the hero of Slumdog Millionaire, is a Mumbai teenager who becomes a contestant on the Indian version of the TV game show “Who Wants to be a Millionaire”. The plot is as simple as can be: every time “Millionaire’s” host asks a new question, Jamal has a flashback. Each flashback leads Jamal to an answer and gives us another chapter of his life story.

Slumdog Millionaire rests on the shoulders of the nine young actors who play Jamal and his two fellow “musketeers” at various ages, and co-directors Danny Boyle and Loveleen Tandan do a dazzling job of completely individuating them through a complicated series of often heart-breaking adventures.  Stay for the credits—they’re the icing on the cake. Bravo! (JLH: 4.5/5)

Slumdog Millionaire is the first great film of the new “flat world.”  Using state-of-the-art tools and techniques from “the first world,” Slumdog Millionaire tells a “third world” story that respects the difficult lives of its characters while still providing audiences everywhere with a credibly upbeat ending.“Jamal” (Dev Patel), the hero of Slumdog Millionaire, is a teenager who serves tea in a Mumbai call center.  Jamal has a dream; he wants to be a contestant on the Indian version of the TV game show Who Wants to be a Millionaire—and his dream comes true.  Unlikely?  Yes.  Impossible?  No.  Reality shows are immensely popular all around the world, and they depend on the emotional investment of audiences who want to watch people like themselves literally transformed into televised “players.”

The plot is as simple as can be: every time Millionaire’s host “Prem” (Anil Kapoor) asks a new question, Jamal has a flashback.  Each flashback gives Jamal clues while simultaneously providing the film’s audience with another chapter of his life story.  I’m not giving anything away here.  Suffice it to say that the movie would be pretty short if Jamal didn’t have an uncanny ability to keep playing.

So, for example, one question is: “What face appears on an American hundred dollar bill?”  Prem is certain that no chai wallah can possibly know the answer to this question, so when Jamal says “Benjamin Franklin,” Prem is astonished.  Of course, as soon as Prem responds (“You’re right!”), we’re bombarded with flashing lights and jazzy sound effects, but this is a triumphant cinematic moment because Jamal’s ability to draw strength from his piteous circumstances gives us all hope.  Members of the onscreen audience rejoice simply because Jamal knows the answer, and knowing the answer allows him to keep playing for ever higher stakes.  But members of the film audience are even more exhilarated because we see why he knows, and that makes us the real beneficiaries of Jamal’s success.

Slumdog Millionaire rests on the shoulders of nine young actors, none of whom came to this project with significant screen experience.

These nine youngsters completely individuate themselves—we always know which one is which in every scene.  From the very start, Jamal is resourceful, Salim is pugnacious, and Latika is resilient.  Just watching them meet the challenges of life in modern India as they grow would be thrilling in and of itself, even without the game show hook.  But starting the film with teenage Jamal (Dev Patel) facing off against Prem has one great narrative advantage: even though the odds against them seem almost insurmountable, we already know these kids are going to survive.  If we didn’t know this from the start, would we still let ourselves go where these filmmakers take us?  Be warned: some portions of their journey will totally break your heart. 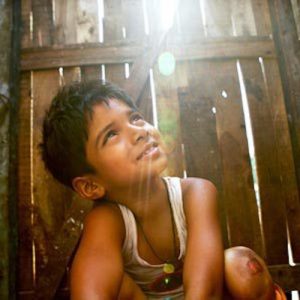 Three adult actors serve as narrative anchors.  Bollywood star Anil Kapoor gives Prem a sinister glamour, Irrfan Khan (best known to first-world audiences as Gogol’s father, “Ashoke Ganguli,” in The Namesake) warms up the otherwise thankless role of a police inspector called in when Prem accuses Jamal of cheating, and Ankur Vikal plays “Maman,” the Fagin equivalent in the horrific Oliver Twist-type scenes.  But the nine youngsters are the heart and soul of this film, and if any one of them had stumbled, then Slumdog Millionaire would never have become so much greater than the sum of its parts.  Kudos to the filmmakers and their total command of the arts & sciences of cinema!

Posters and reviews all announce that Slumdog Millionaire was “directed by Danny Boyle,” but IMDb & the official press kit all say that Slumdog Millionaire was “co-directed by Loveleen Tandan.”  Danny Boyle is the well-known director of many highly-regarded films including Millions, Shallow Grave, and Trainspotting, but who is Loveleen Tandan?  Luckily I was able to ask Danny this question when he came to town for the 2008 Chicago International Film Festival.

Jan: Danny, I’m here today as an advocate for women filmmakers [handing him a WITASWAN brochure], so I’d like to talk about Loveleen Tandan’s contributions to Slumdog Millionaire.  Based on what I’ve learned about her from IMDb, I’m guessing that she started out as your casting person, right?

Jan: Mira Nair’s film The Namesake is very dear to my heart!  So what did each of you bring to Slumdog Millionaire from a male/female perspective?  Is there any way in which your collaboration with Loveleen Tandan brought out different aspects of the drama?

Danny: Well it would’ve been such a different, poorer film if she hadn’t been involved, and I take credit for that, of course!  As I was casting with her, I realized, because I’m not a fool, that I needed her there every day.  And eventually I sent her off to shoot the second unit.

Jan: And now you’re calling her your “co-director,” right?

Danny: Yes, she deserves it!  She’s a proper director.  You can feel it.  You just know, really.  Initially it was obvious how she helped us with the casting.  The little kids didn’t speak much English; they spoke Hindi.  We’d be trying to audition in English, and it wasn’t working with 7-year olds, and she said: “I’m horrified to tell you, Danny, but you should do it in Hindi.”  I said: “Okay, we’ll do it in Hindi.”  It was like a million times better straightaway.

So I rang the studios and said: “A third of it’s going to be in Hindi, guys.”  And they’re like: “What!?!”  They thought l’d gone insane, lost upstream somewhere, kind of like Colonel Kurtz [in the film Apocalypse Now based on Joseph Conrad’s story Heart of Darkness].  I said: “Listen, listen, it will be in Hindi and that will make it even more exciting.”  Then we came up with the subtitle idea—move the subtitles about—and when they saw it they were delighted!  They’re like: “Cool, cool; this is cool.”

Loveleen was also my cultural connection.  You have to check things, obviously, so you don’t make any howling mistakes.  But also so that when you know you do want to make “a mistake” because the narrative demands it, you’re confident you’re making it for the right reasons.  So sometimes she would say: “That would never happen.”  And I would overrule her, but it’s because I understood the parameters.

I have to tell you this is great [looking at the WITASWAN brochure] because if there’s one thing I think, it’s that there are just not enough women in film.  And you think: Why is that???

Jan: Thanks, Danny!  You’re a real mensch in every way!

To read more about the term “mensch,” please click here.

If you have not seen the film Slumdog Millionaire please DO NOT read any further; if you have, please read on.

As screenwriter Simon Beaufoy explains in the official press kit: “The biggest problem in converting the book to a screenplay was that it was effectively a series of twelve short stories.  It had no over-arching narrative.  Some of the stories were almost discreet little tales that had no reference to the main characters at all… My job was to find the overall narrative [in the novel by Vikas Swarup], and then to trace a storyline that went all the way through Jamal’s life.”

Both novel and screenplay have the same basic goal: to reveal the arc of a life though a series of quiz show questions.  But even though Beaufoy takes several incidents from Swarup’s novel, he creates a very different central character.  Swarup’s hero is an orphan named “Ram Mohammed Thomas.”  Ram never knows anything about either of his parents, and he has no clue if they were Hindus, Moslems, Christians, or some combination.  He spends his early years in the care of a Catholic priest, and his greatest asset moving forward is his ability to speak English.  Ram has a friend named Salim, but Salim is an intermittent presence, and Ram’s visits to the young prostitute “Nita” pale in comparison to Jamal’s chaste devotion to Latika.

Beaufoy took a good book and turned it into a great screenplay.  Using Alexandre Dumas’s title The Three Musketeers as his central image and Charles Dickens’ novel Oliver Twist as his narrative spine, Beaufoy creates a compelling triangle built on the overlapping stories of a Muslim teenager, his brother, and the girl who is sometimes sister, sometimes bride.  Tricky devil: Beaufoy never actually names the third Musketeer, but I’ll save you a trip to Wikipedia.  The answer is Aramis.

‘The Souvenir’ a murky look into complicated relationship

Film Review: STEAL A PENCIL FOR ME