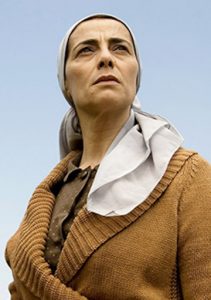 “Salma Zidane” is a Palestinian widow living in a small house on the eastern edge of the Green Line. Her life is immediately impacted when an Israeli woman named “Mira Navon” becomes her new neighbor. As they watch each other, day after day, from windows on opposite sides of the fence running through Salma’s lemon grove, these two women become allies if never quite friends.

Israeli director Eran Riklis and Palestinian screenwriter Suha Arraf have developed a unique collaboration; their films are delicate and understated, with profound sympathy for female characters constrained by male conflicts.
They wrote the part of “Salma” specifically for Hiam Abbass (one the best screen actresses in the world today). This film is a sincere and even-handed prayer for peace, and I love it. (JLH: 4.5/5)

“Salma Zidane,” the main character in Eran Riklis’s beautiful new film Lemon Tree, is a Palestinian widow who has lived in a small house on the eastern edge of the Green Line for most of her life. But Salma’s quiet habits and lonely routines are immediately impacted when “Mira Navon” becomes her new neighbor. Mira and her husband are Israelis, and Mira’s husband is Israel’s minister of defense.

The trees that provide Salma with an income also provide cover for terrorists, so Navon’s military minders decide to level the land on both sides of the fence separating their two homes. Salma receives a letter (in Hebrew) informing her she will be compensated, but when she asks her village elder to read it to her, he tells her she’s not allowed to accept money from the Israeli government even when offered. With nothing to lose, Salma decides to fight back. She sells all her valuables and hires an attorney named “Ziad Daud.”

Ziad has recently relocated to Ramallah, leaving an ex-wife and young daughter behind in Russia. He’s ambitious and media-savvy, and he knows that representing Salma will enhance his reputation, both locally and internationally, even though he will almost certainly lose her case in court. Minister Navon, “Israel,” is enraged; Ziad gets under his skin and the effort to appear reasonable on television makes him even more of a bully at home.

Salma and Mira are both empty-nesters with children in America, and as the film progresses, this becomes a source of mutual empathy. Watching from windows on different sides of Salma’s lemon grove, they become allies if never quite friends. Mira doesn’t consciously set out to betray Israel, but seeing how Salma responds under pressure makes Mira look inside herself for the first time in years. If Salma can resist, constrained as she is by expectations that are not in her own best interest, Mira realizes she can too.

Some people will come out of Lemon Tree thinking it’s either pro-Palestinian and/or anti-Israeli but I disagree: director Eran Riklis doesn’t provide any easy or polemical answers here. Riklis and screenwriter Suha Arraf (who also wrote The Syrian Bride screenplay with him) have developed a unique collaboration; their films are delicate and understated, with profound sympathy for female characters trapped at the edges of male conflict. When soldiers arrive to cut down Salma’s trees, it’s not just a power play. Terrorists are, in fact, hiding weapons in her lemon grove, and they have no more sympathy for Salma’s predicament than her village elder does. She neither expects anything from them nor tries to defend them, and she knows from the start that even Ziad will ultimately betray her. By insisting on her day in court, Salma’s not just protesting against Israeli occupation, she’s also refusing to play by the rules of Palestinian society (seen here as always looking backwards and refusing to compromise).

Hiam Abbass plays Salma with enormous passion and dignity. I first became aware of Abbass when I saw her in Satin Rouge (a 2002 film by Tunisian writer/director Raja Amari), and I’ve been a fan of hers ever since. The Israel Film Academy nominated her for a Best Actress award in 2004 (for the role of “Amal” in The Syrian Bride), and when she was named Best Actress last year for her performance as “Salma,” she became the first Palestinian actress ever accorded this honor (even though Lemon Tree was not a commercial success in Israel). Riklis and Arraf wrote the part of “Salma” specifically for Abbass, and it is crafted to reveal all her lights and shadows. She is quite simply one the best film actresses on screen anywhere in the world today, and you will recognize her immediately if you saw the critically acclaimed indie film, The Visitor (in which she gave a luminous performance as “Mouna”). 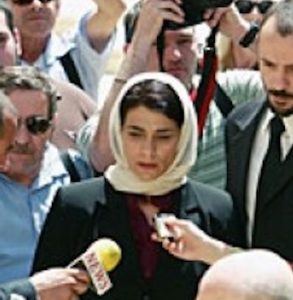 Ali Suliman (“Ziad”) is also an increasingly familiar face in world cinema. Although he had a small role in The Syrian Bride, he played one of the lead roles in the Oscar-nominated Palestinian film Paradise Lost (2005), and major supporting roles in two recent multiplex films The Kingdom and Body of Lies. The role of Ziad is a tricky one—he’s handsome and charismatic, but haunted by demons. Every woman’s nightmare!

Rona Lipaz-Michael, by contrast, is making her screen debut here as “Mira” (although she’s had a highly regarded career on the Israeli stage). The counterpoint works beautifully; just as Mira studies Salma and draws inner strength from watching her, so Lipaz-Michael seems to learn her craft right before our eyes by working with Abbass. Although they only meet face-to-face in one brief scene, Riklis and Arraf create a palpable chemistry between Salma and Mira, and their relationship drives the story forward to its bittersweet but emotionally satisfying conclusion.

Doron Tavory (“Israel Navon”) is also relatively new, with no major film credits to his name. While he’s fine in the part, Riklis and Arraf haven’t given Defense Minister Navon much shading, and naming him “Israel” seems out-of-sync with the subtle nuance which characterizes the film as a whole.

Of the three Riklis films I’ve seen, Lemon Tree is his best film to date. (The Syrian Bride and Cup Final, his critically-acclaimed 1991 film, are both available on DVD). Once again, Riklis proves there are no winners in the Arab/Israeli conflict, only losers. This film is a sincere prayer for peace and the end of enmity between neighbors.

“I’m an actress. What interests me most is the humanity of the characters that I could play. They can have any identity and be of any nationality. I play the roles of different kinds of women who could represent parts of societies in different countries, as well as the Arab countries. It’s not a choice of my doing a role because I can speak in the name of someone of a particular nationality or level of society.”

“I was born in a semi-traditional family. Although my parents were very liberal and educated, they were surrounded by people who were very different from them. But at the same time, they had to live with them, so they had to educate us in a way where we would just fit into the society. When you come with ideas that are strange to the traditions that you’re living in, everything is hard. For them it’s hard. And for me it’s hard, because I’m bringing this new idea that they don’t want—and so the struggle starts. I was born different.”

“Collaborating is really incredible. I just received a new script. I called the director last Wednesday and told him: ‘There’s some stuff I think doesn’t work very well, but I will do the film whether you are willing to listen to me and take my notes in consideration or not. I would love to do it, because I think the story is really very interesting.’ Fortunately, the director was really very accepting and open and he took my notes. Now what he’ll do with them, I don’t know.” 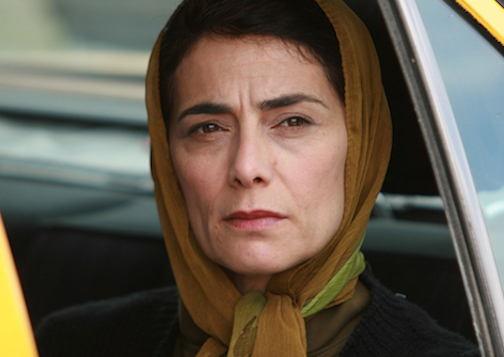