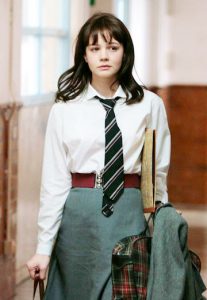 Lone Scherfig’s terrific new film “An Education” opens in a classroom in an English suburb in the early 60s. The subject under discussion is Charlotte Brontë’s novel Jane Eyre. Written over one hundred years before scene one, Jane Eyre still maintains its curious hold on the female imagination. Must we be forever reminded that Mr. Rochester, “the hero,” locks his first wife up in an attic?

A con artist named David (Peter Sarsgaard) seduces an impressionable teenager named Jenny (Carey Mulligan), but after a few semesters in his “University of Life,” Jenny returns to her teacher, Miss Stubbs (Olivia Williams), and Miss Stubbs is the one who provides the final boost required to launch Jenny from her time into our own. (JLH: 4.5/5)

Lone Scherfig’s terrific new film An Education opens in a classroom. The place and time are very specific: we’re in an English suburb in the early 60’s. Born right after World War II, these teenage schoolgirls have all grown up with post-Blitz austerity. They don’t know what we know—if they can just hang on, The Beatles, Twiggy, Carnaby Street, and “Swinging London” are all right around the corner. But in the meantime, the most liberated role model on offer is Jane Eyre, a heroine created by novelist Charlotte Brontë over one hundred years before scene one.

Jane Eyre is, in fact, the subject under discussion when we first meet “Jenny” (Carey Mulligan) and her severely bespectacled teacher “Miss Stubbs” (Olivia Williams). Then the school day ends, and Jenny’s “Mr. Rochester” arrives in the guise of a handsome man named “David” (Peter Sarsgaard). Like someone sent from Central Casting, David appears to be both cultured and financially prosperous, and he quickly charms Jenny’s parents, “Marjorie” (Cara Seymour) and “Jack” (Alfred Molina). They’re not concerned that David is considerably older than Jenny, after all, wasn’t Mr. Rochester at least twice Jane’s age? In fact, only one person seems resistant to this budding romance: Miss Stubbs.

But how can Miss Stubbs, with her Cambridge degree, compete against David, a self-described graduate of “the University of Life”? Jenny, always a superior student, dives head first into his new curriculum: concerts and restaurants, jazz clubs and race tracks. David’s seemingly inexhaustible resources even include the perfect set of travel companions, his suave business partner “Danny” (Dominic Cooper) and Danny’s gorgeous girlfriend “Helen” (Rosamund Pike).

Like all teenage girls, Jenny thinks she understands sexual exchanges. How often has she already paid for one movie ticket with one good night kiss? Jenny knows David is spending a lot of money on her, and she’s decided she’s ready to pay the price. But an air of foreboding hangs over An Education. Has everyone forgotten that Mr. Rochester locked his first wife up in an attic? Oh, Jenny!

An Education is loosely based on a brief memoir by Lynn Barber, a highly accomplished and very well-known English journalist. But Scherfig and screenwriter Nick Hornby (who wrote the autobiographical charmer Fever Pitch as well as box office hits About A Boy and High Fidelity) wisely jettison the memoir’s bitterness and implicit self-loathing, and focus forward. Jenny is who she is on screen, and she has no idea who she will become (even if we think we do). “The actor should never play the ending,” Scherfig told me, “and in a way, with this film, the ending is after the film is finished.”

An Education sets out the full range of female options available to a girl like Jenny, with teachers like Miss Stubbs and the Headmistress (Emma Thompson) on one end, and mother Marjorie and neighbor Sarah (Sally Hawkins) on the other, while glamorous Helen twinkles at her from the wrong side of respectability. Jenny sees all these possible futures and intuitively rejects them, but breaking free of cultural expectations is no easy task for someone raised to be “a good girl.”

When I spoke with Scherfig, I referred to An Education as an ensemble piece (by which I meant all the individual characters were extremely well-delineated), but she quickly corrected me: “No, it’s Jenny’s film—you’re supposed to see things with her eyes!” But then Scherfig acknowledged: “If it didn’t have all the layers, then the film would not be ‘epic’ as opposed to ‘dramatic’. . . It’s almost the time, and not Jenny, that’s the main character in An Education.” 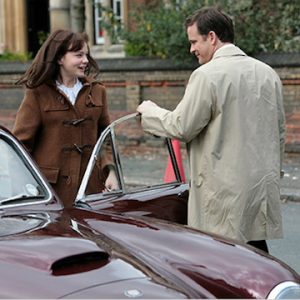 Carey Mulligan is lovely as Jenny. She’s smart and pretty and carries the center with a quick tongue, expressive eyes, and graceful body language. I’m not sure if she can bear the hype of being labeled “a new Audrey Hepburn,” but I love that she’s being compared to one of Hollywood’s most bankable leading ladies, and I hope screenwriters write more parts for her.

Peter Sarsgaard adds another complex role to his already fine resume. David must be so smooth and charming that Jenny’s parents not only admit this predator into their home, but are also willing to accept him as a permanent part of their lives. If I ruled the world, Sarsgaard would already have at least one Oscar on his shelf (for his supporting role in Kinsey) as well as additional nominations for his performances in The Dying Gaul and Shattered Glass. Perhaps playing David will finally bring him the multiplex attention he deserves, but this role isn’t really much of a stretch for him.

The great surprise is Olivia Williams as Miss Stubbs, her depth of character used to counterbalance Sarsgaard’s dazzling surface. Best-known as Bruce Willis’ wife in The Sixth Sense, Williams, like Sarsgaard, has a long list of well-regarded supporting roles, but made dowdy here, this very beautiful woman really touched my heart. Miss Stubbs is a formidable presence; although both her look and her affect are constrained, she clearly has a discerning eye, acute intelligence, and a well-developed conscience (a quality otherwise in short supply).

Looking at An Education as an epic (like Ben-Hur) explains a great deal. A mature man seduces a young girl — this drama is a cultural staple with a curious hold on the female imagination (as evidenced by the continued popularity of Jane Eyre and all her literary and cinematic progeny). But the fact that we’re finally learning to question it as “a romance” can be attributed to the fact that writers like Lynn Barber are finally telling the story honestly from a real girl’s point of view.

But here’s the problem: the multiplex is not a woman-friendly place, and films with female protagonists are hard to sell (all the more so when they’re made by woman filmmakers). So expect the marketing campaign for An Education to use glamorous photos of Jenny and David, augmented by clips of Jenny with her father Jack, to lure audiences into the theater, burying Miss Stubbs in the background along with Marjorie, Helen, etc., etc.

Don’t be fooled! In this film, a teacher literally saves the day. After a few semesters in “the University of Life,” Jenny returns to her teacher, and Miss Stubbs is the one who provides the final boost required to launch Jenny from her time into our own.

SPOILER ALERT!!!
Please do NOT read until AFTER you have seen An Education

As a Jewish-American critic, I am often perplexed about the representation of Jews in popular culture. I sometimes watch films about characters I know are Jewish, but they’re not identified as Jews, and they’re played by actors seemingly selected to throw audiences off track. Adapting The Devil Wears Prada for the screen, for example, Jewish writer Aline Brosh McKenna removed Jewish identifiers from her two lead characters,”Andy” (Anne Hathaway) and “Miranda” (Meryl Streep), both of whom are clearly identified as Jews in Lauren Weisburger’s source novel. When I asked her why, McKenna said: “We were trying to streamline the book and we had a lot of stuff to deal with, and it didn’t seem like that [the fact that both characters were Jewish] was a part of it.”

So what to make of the fact that David is explicitly identified as Jewish in An Education? In Lynn Barber’s memoir, her Mr. Rochester isn’t just Jewish, he’s actually lived in Israel and may even be Israeli. (Lynn keeps trying to locate his accent but never quite succeeds.) He tells stories about his kibbutz days, and when he calls Lynn years after the end of their relationship, he calls her from Jerusalem.

These details are completely deleted from the screenplay, and what little remains of David’s Jewish background has its primary pay-off in Jenny’s second scene with her school’s Headmistress: “He’s a Jew? You’re aware, I take it, that the Jews killed our Lord?”

From a Feminist perspective this is a real mistake, because in their third and final scene together, the Headmistress nails it. Jenny says: “I suppose you think I’m a ruined woman,” and the Headmistress replies: “You’re not a woman.” The regal Emma Thompson is making a critical plot point here: a girl does not become a woman just because she’s had a sexual relationship with a man.

I hate to see the tremendous power of these words diminished because they come from the mouth of someone already discredited as an anti-Semitic bully. Furthermore, the historical facts add an extra level of anxiety for Jewish viewers: the film is set in 1962 and the villain is a Jewish man in his late thirties. So where was David before, during, and immediately after WWII?

And here past and present collide: Sony Pictures Classics is opening An Education in American theaters in October ’09; meanwhile, in Switzerland, Roman Polanski (a Jewish man known to have “a taste” for young girls) awaits extradition for crimes committed in 1977. Many of Hollywood’s alpha males are howling in protest, but most of Hollywood’s alpha females, such as they are, remain mute. And as a Jewish Feminist, I sit here in Chicago appalled that some people actually add the Holocaust to the list of excuses for Polanski’s execrable behavior.

The Jenny we meet in An Education is telling her story in the present tense. She’s in a state of adolescent bewilderment. She does things she knows she shouldn’t do, sometimes playing out the fantasies of her school chums, sometimes just to thumb her nose at her oblivious parents. I’m not just condemning sex acts here; under David’s tutelage, Jenny learns to lie, cheat, and steal.

Here’s how Lynn Barber concludes her memoir: “I learned to not trust people . . . So that when, thirty years later, I heard that ‘Minn!’ on the phone from Jerusalem, I hated him more, not less, for all the intervening years.”

It will take “our Jenny” several decades to find these words, so it’s up to us to supply the disgust over what occurs in the here and now. We must look beneath the pretty surface of the romance, and demand to see what David keeps hidden in his attic. David is a con man. He had young girls before Jenny, and he will have young girls after her. If the real David cherished memories of the real Jenny in later years, it’s probably because she’s one of the few who managed to get away from him before he got tired of her and moved on. There is no Miss Stubbs in Lynn Barber’s memoir; she has nothing good to say about any of the adults who were responsible for keeping her safe. If we fail Jenny now, we’ve earned the same low grade.

To read my chat with Lone Scherfig, visit:
http://www.films42.com/chats/LoneScherfig.asp

Q: Does An Education pass the Bechdel-Wallace Test?

Jenny’s teacher, Miss Stubbs, acts as the counterpoint to David’s influence. Miss Stubbs shows Jenny that she should focus on herself and on her own future, rather than on a more immediately satisfying present offered by a man.