Seventeen-year-old “Ree Dolly” (Jennifer Lawrence) is searching for her father. Born into an insular criminal world totally foreign to most of us, Ree doesn’t know everything, but she knows a great deal more than we do, and it’s our job to catch up.

Like The Godfather Saga, Winter’s Bone transcends genre rules and creates indelible characters with great mythic resonance. But in Winter’s Bone, we’re following a girl’s journey to womanhood, therefore women, not men, are always in the foreground.

Winter’s Bone is based on a 2006 novel by Daniel Woodrell. In this case, the filmmakers (director Debra Granik and her writing partner Anne Rosellini) have achieved the near impossible, creating a work of art totally synergistic with its source. Yes, reading Winter’s Bone in novel form enhances the cinematic experience, but watching Winter’s Bone on screen also enhances the literary experience. I doubt I’ll see a better film this summer; maybe I won’t see a better film all year! (JLH: 4.5/5)

Seventeen-year-old “Ree Dolly” (Jennifer Lawrence) is searching for her father Jessup. At first she’s looking with a weary air of resignation. After all, this is a man who has left her alone, time and again, to care for a mentally ill mother and two young siblings. But something is different now; Ree can sense it even if it takes her a while to put all the pieces together.

The characters in Winter’s Bone come from Daniel Woodrell’s 2006 source novel, adapted for the screen by director Debra Granik and her writing partner Anne Rosellini. Granik and Rosellini tell the story completely from Ree’s point of view, the POV of someone born into an insular criminal world totally foreign to Granik and most of her viewers. Ree doesn’t know everything, but she knows a great deal more than we do, and it’s our job to catch up.

Cinematographer Michael McDonough filmed every scene on location with new digital RED, softening the harsh landscapes with sun-dappled trees, clouds of smoke, and crusts of frost. The people all have a mythic resonance, and Granik embellishes their spare dialogue with twangy music (including vocals by folklorist Marideth Sisco) on the soundtrack. The result is a film that works equally well in two dimensions: it has the dreamlike quality of a classic fairytale (like Little Red Riding Hood, Ree often trudges alone through dark forests), but it also feels totally true to its own specific place and time (the Ozark hills of Southwest Missouri where methamphetamines—also called “crank” and “crystal meth”—are the current drugs of choice).

Although the criminal element provides narrative drive, it’s really just a hook to draw us into Ree’s world. Faced with troubles like those that plague “Michael Corleone” (Al Pacino) in The Godfather, Part I, Ree will never find a way to reconcile family love with the dictates of her own troubled conscience. Both Vito Corleone and Jessup Dolly courted their fate; Ree knows this, just as Michael does, but that only makes things more painful for both of them.

The Godfather Saga, like all the best crime dramas, transcended genre rules and placed plot in service to character. In this case too, Ree Dolly is on an epic American journey. But in Winter’s Bone, we’re following a girl, therefore women, not men, are always in the foreground.

Ree knows full well there are some places women should never go; she goes anyway. And women see her coming, opening their doors to her before she can knock. “Ain’t you got no men could do this?” asks “Merab” (Dale Dickey) wife of the stony patriarch Thump Milton. “No, ma’am, I don’t.”

Meanwhile their men, drug-fueled and reckless, posture and preen. Early on Ree thinks she can depend on her “Uncle Teardrop” (John Hawkes), but he wants none of it. When his girlfriend “Victoria” (Cinnamon Schultz) tries to intercede, Teardrop barks at her: “I said shut up once already, with my mouth.” But Ree’s persistence draws Teardrop back like a moth to the flame. When Victoria mouths off in front of Ree, that’s merely a private embarrassment, but Ree bloodied and bruised is a public humiliation, so Teardrop swoops in like an avenging angel, bringing them both closer to death than to answers. Sitting in the audience, we can see that volatile Uncle Teardrop is as doomed as Michael Corleone’s brother “Sonny” (James Caan). Ree sees this too. Dangers in the frigid world outside are counterpointed with intimate scenes of a surprisingly warm domestic life. Brother “Sonny” (Isaiah Stone) and sister “Ashlee” (Ashlee Thompson) follow Ree’s every move with their eyes and bundle against her like pups whenever she slows down. Mother “Connie” (Valerie Richards), unable to fill a parental role, has become a third dependent, so Ree cares for her tenderly, brushing her hair and keeping her close to the stove. Drawing strength from fond memories, Ree shows her young siblings photographs of Connie, and this helps them stay bonded as a cohesive unit: “I’d get lost without the weight of you two on my back.” says Ree, and it’s true.

As the story moves forward, Ree encounters three adult men on the right side of the law (Garret Dillahunt as a sheriff, Tate Taylor as a bail bondsman, and Russell Schalk as an army recruiter), all of whom are heavier and more stolid in their bulk than scrawny meth-heads like Uncle Teardrop and Little Arthur. In her current circumstances, Rhee must do everything possible to keep men like these at the periphery of her world. But by giving them all a padded virility, Granik shows us a light at the end of the tunnel. Ree will continue to gravitate towards their world not only for her personal safety but because she already knows her brother Sonny has no future otherwise. (“Sonny,” can that name be a mere coincidence?)

For decades now, Parts One & Two of The Godfather Saga have been considered masterpieces of world cinema. Can Winter’s Bone stand up to this comparison? Consider this: The release of The Godfather, Part I in 1973 made stars of hitherto unknown actors like Al Pacino and James Caan, and it resurrected Marlon Brando’s career. Winter’s Bone is also perfectly cast, and I predict that, come December, Jennifer Lawrence (“Ree”) and John Hawkes (“Uncle Teardrop”) will both find places on Oscar short-lists. If I ruled the world, Dale Dickey (“Merab”) would be on those lists too.

Regular readers already know that I follow a rigid rule when reviewing adaptations: I always try to see the film first. When I enter the theatre to see a film for the first time, I want my mind to be the cleanest possible slate, but once I decide to write a full review, I read background materials and then see the film a second time before completing my review. I do NOT believe the conventional wisdom that a source book is always better than a film. In fact I have written several reviews in which I argue that the film is actually better than its source book. But more important than compare & contrast, I believe that books and films are different aesthetic experiences subject to different rules, and filmmakers must always have full latitude to make cinematically-significant decisions.

I urge you to share this journey with Ree. I think if you do, you’ll be richly rewarded. Is this a violent story? Sometimes, yes. But as Ree says to Sonny: “There’ stuff you’re just gonna haveta get over being scared of.” Me, I doubt I’ll see a better film this summer; maybe I won’t see a better film all year! 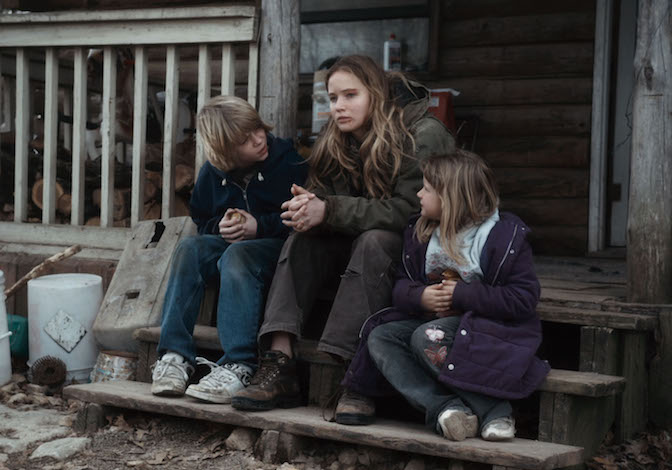