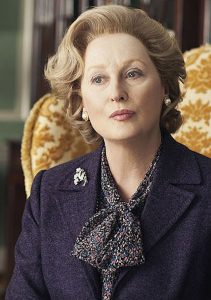 Phyllida Lloyd’s new film The Iron Lady is a bio-pic about Margaret Thatcher, Prime Minister of the United Kingdom from May 1979 until November 1990. A million historical details, large and small, make Baroness Thatcher a unique individual, yet Lloyd and screenwriter Abi Morgan choose to minimize the episodes that make their subject’s life specific and turn her into someone generic. Why, ladies, why?

Fortunately 15 minutes of brilliant filmmaking lie at the heart of The Iron Lady. With almost no dialogue to weigh it down, we literally see “Young Margaret” transformed, against all odds, from a suburban matron (played by Alexandra Roach) into Meryl Streep’s parliamentary powerhouse. And this sequence is so strong and so well-done that however imperfect it is, The Iron Lady is still a movie you must see. (JLH: 3/5)

I’ve just watched Phyllida Lloyd’s new film The Iron Lady for the third time. I really, really want to love this film, but I don’t and that’s torture!

The Iron Lady is a bio-pic about Margaret Thatcher. The first female leader of a “First World” nation, Thatcher served as Prime Minister of the United Kingdom from May 1979 until November 1990. Her improbable rise to 10 Downing Street from a flat above her father’s Lincolnshire grocery is the stuff of legend. And debates about her controversial policies, still known as “Thatcherism,” are on the nightly news once again now that the European Union is threatening to fragment and the USA is facing the prospect of a double dip recession.

A million historical details, large and small, make Baroness Thatcher (still alive at age 86 as I write) a unique individual. There’s more than enough material in this life to fill the length of a typical feature film. But rather than take any of it head on, Lloyd and her screenwriter Abi Morgan choose to rewrite Shakespeare, casting the fabulous Meryl Streep as a senile “Queen Lear” who wanders the heath in the company of her long-dead husband Denis (a role that literally requires Oscar-winning actor Jim Broadbent to play “the Fool”). And so, for about a third of The Iron Lady’s 105 minute runtime, we watch an elderly woman who could be anyone fret about what to do with her late husband’s things until she finally stuffs the contents of his closets into plastic garbage bags. Oy!

Since Lawrence of Arabia, my all-time favorite film, is a BioPic, I’ve always felt a special need to weigh in on this subject. So way back in 2001, when I created the prototype for my website Films for Two, I wrote an FAQ called “Does ‘the truth’ matter?”

My conclusion: “We enter the theater knowing that time constraints make it unlikely that the filmmakers can do justice to all ‘the facts.’ We assume that the filmmakers will modify facts for narrative purpose. The success of the effort is best measured by overall coherence. Does the story being told make sense?”
(http://www.films42.com/faq/faq_truth.asp)

Ten years later, having seen dozens of BioPics in the interim, this is still my view, and leaving the screening room after watching The Iron Lady, this is my inevitable bottom line: Does the story we are told in The Iron Lady make sense? Sadly, I’m forced to say no. Two highly accomplished female filmmakers minimize the episodes that make their subject’s life specific, and turn her into someone generic. Why, ladies, why?

Fortunately the flashbacks show us the film that might have been, and many of them are so good that I’m still telling you to see The Iron Lady; imperfect as it is, it still has much to recommend it. 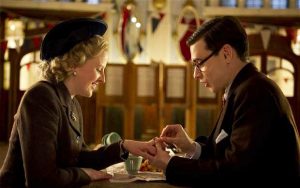 Deconstructing The Iron Lady and playing it back chronologically in the theatre of the mind, we meet young “Margaret Roberts” (Alexandra Roach)  as a classic “Daddy’s Girl” who will do anything to win the approval of her stern father “Alfred” (Iain Glen), even to the point of risking her life during a WWII bombing raid. When Margaret wins a place at Oxford, Alfred is all aglow, but mother “Beatrice” (Emma Dewhurst) casts a pall on the celebration; she refuses to read the letter from Oxford, turning her back on Margaret and returning to her kitchen to wash dishes. (This domestic necessity is one of The Iron Lady’s most annoying leitmotifs.)

Now an Oxford graduate, but still very much the daughter of the man who raised himself to Mayor of Grantham, Margaret Roberts decides to present herself as a Conservative candidate for the House of Commons. Seated at a posh dinner table surrounded by the formidable men assigned to vet her, Margaret meets a businessman with a helpful demeanor and a mischievous twinkle in his eye. This, of course, is young “Denis Thatcher” (Harry Lloyd). As a single woman, he tells her, your prospects are dim. But as the wife of someone reasonably wealthy, you will gain not just more personal status but also a fighting chance at professional success.

No wonder “Old Margaret” misses her Denis so much when he’s gone! “Young Denis” speaks precisely the words she’s desperate to hear in her innermost heart, and Lloyd is so sweet and charming that he steals every scene he’s in. Supported by her husband and flanked by the twins (Carol and Mark) who make her look even that much more respectable on the stump, Margaret is soon on her way to Parliament.

And here, at the 30 minute mark, Lloyd begins Act Two with 15 minutes of brilliant filmmaking: One spot of blue in a sea of black; one pair of heels in a row of lace-ups; one high-pitched voice in a den of growling predators. Wake up, London! “Mrs. Thatcher” (now Meryl Streep) has arrived!

I want to know more about this woman. I want to watch her climb, rung-by-rung, until she’s reached the heights of power. I want to know more about this pride of lions too. Who are they, as individuals, and how do they act when she’s not in the room? And what happens in her personal life? How do her parents (Alfred and Beatrice) and her children (Carol and Mark) react to her ascension as Margaret transforms over the years from someone operating within the family to someone hovering above it. Did Margaret have any friends? What happened to her sister Muriel? 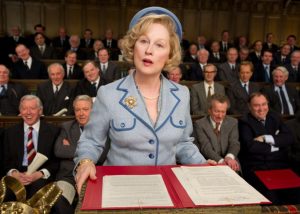 There are clues in the way Lloyd constructs her crowd scenes. As a matter of historical fact, Margaret did have some female colleagues in Parliament (not to mention routine standing meetings with Queen Elizabeth during her years as Prime Minister), but none of them get any lines of dialogue in Morgan’s screenplay. Margaret-the-Politician, as depicted on screen, is always surrounded by men, and only men.

So it’s very poignant to see that when Margaret is forced out of office, the staff of 10 Downing Street is almost entirely female. Tears stream down their cheeks, even as Margaret’s rivals are patting each other on the back, but these women are even more undifferentiated than the women who care for Margaret in her twilight years. And within the family circle, daughter “Carol” (Olivia Colman) is a constant physical presence, whereas son Mark is just a voice on the phone (a voice we never hear). The Queen Bee, now dethroned, has lost all of her drones.

Maybe this is the point? Maybe Lloyd and Morgan want us to know that no matter how much a woman achieves in her lifetime, in the end she’s just another lonely old lady washing dishes? If so, then it’s a sad story and frankly one that’s not much fun to watch.

For several years now, I’ve chronicled a disturbing trend: year after year, every time the indomitable Meryl Streep releases a new film, critics (most of whom are male) praise her performance but dis the film she’s in (especially when it’s either written and/or directed by a woman filmmaker). As a result, Streep has already received an astounding number of Oscar nominations (16!), but she’s only won two, both of which were awarded way back in the ‘80s (Best Actress for Sophie’s Choice in 1983 and Best Supporting Actress for Kramer vs. Kramer in 1980).

So expect Meryl Streep to receive her unprecedented 17th Oscar nomination on January 24, 2012, but don’t expect nominations for either Phyllida Lloyd or Abi Morgan (although Morgan might well be co-nominated with Steve McQueen for the Shame screenplay—a film I hated).

Handicapping aside, would Meryl Streep receive an Oscar nomination this year if I ruled the world? Sadly, once again, I’m forced to say no. And ironically this is because the film itself (for all the reasons specified above) lets her down.

A tremendous amount of work has gone into creating the Thatcher “look,” and J. Roy Helland (who did Streep’s hair and make-up) and Jane Law (who did her costumes) should definitely be recognized for their contributions. But somehow this specific performance feels “outside in” rather than “inside out” (the first time I’ve ever said this about a Meryl Streep performance). It’s not that she’s bad—I doubt Meryl Streep will ever be “bad” in a role—it’s just that the film actually on screen simply doesn’t give her enough to do.

As a result, many actresses who did superlative work in 2011 will likely join Lloyd (and probably Morgan) on the list of “invisible women” watching this year’s Oscar ceremony at home—along with the rest of us—come February 26. And as a further irony, this list will undoubtedly include Olivia Colman (doubly ill-used here as Margaret’s daughter Carol by both her mother and the filmmakers). Colman gave one of the best performances of the year in Tyrannosaur, but it’s a film almost no one saw… 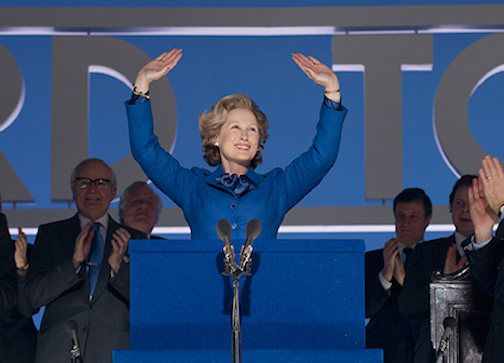 Q: Does The Iron Lady pass the Bechdel-Wallace Test?

Notwithstanding the contextually-important fact that Margaret Thatcher lived most of her life as the lone woman in a web of men, there are scenes with Olivia Coleman as Maggie’s daughter Carol, as well as scenes with various aides and acolytes.