‘We Need to Talk about Kevin’ evokes terrifying parenting tale 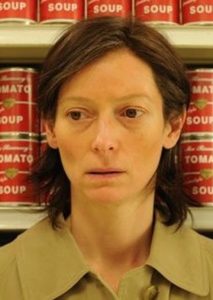 Scottish director Lynne Ramsay’s terrific new film We Need to Talk about Kevin tells the terrifying tale of a woman named “Eva Khatchadourian” (Tilda Swinton) whose teenage son Kevin has just murdered his classmates and teachers in a Columbine-like massacre. The entire story is told from Eva’s point of view; we only glimpse “the real Kevin” at the very end, and we never meet Eva’s husband (“the real Franklin”) at all.

Ramsay’s film is an epistemological drama, brilliantly told from Eva’s point of view, and it is the very opposite of a conventional psychological drama. Ramsay has no time to waste speculating about why Kevin does what he does. In fact, she barely has any interest in Kevin at all. When the film opens, the unthinkable has already happened, and there is no question that Kevin is, in fact, guilty beyond a reasonable doubt. Kevin has been tried, convicted, and imprisoned, but what of Eva? Is she also guilty? And if so, what is the charge?

Tilda Swinton gives an extraordinary rich and complex performance as Eva (a personal best in an already distinguished career), and Ezra Miller (as teenage Kevin) and John C. Reilly (as husband Franklin) are also superlative. Too bad no one at AMPAS (the Academy of Motion Picture Arts & Sciences) wanted to ask any hard questions when the time came to hand out this year’s Oscar nominations. (JLH: 5/5)

“‘Knowing’ is not a yes-no affair,” says Nobel Prize-winning psychologist Daniel Kahneman in his best-selling new book Thinking, Fast and Slow. For thousands of years, philosophers have recognized that “knowledge” is a moving target. How we come to know what we think we know is a process of assembling bits of fact into a coherent story. And we’re never really sure if a new bit of fact might bring the whole house of cards down on our heads.

Anyone who has ever served on a jury in a criminal case knows this “knowledge problem” is especially acute in a law court when we, as members of a jury, are obligated to pronounce judgment. Is the defendant innocent or guilty? Our legal system requires that our verdict be “beyond a reasonable doubt.” Furthermore, all twelve members of the jury must agree to convict before sentencing can begin—a heavy burden given that even the nine august members of the US Supreme Court rarely render unanimous judgments.

To protect us all from unjust punishment, the scales of our legal system are tilted in favor of innocence, and yet presuming innocence often weighs heavy on a jury. Our guts may tell us someone is guilty, but if we can’t be sure “beyond a reasonable doubt,” we must let the perpetrator go free.

And yet, there’s an even bigger problem: perpetrators rarely get to court until they actually do something. On 9/10/01, even if we had known exactly what the hijackers were planning for 9/11/01, we wouldn’t have been able to convict them of mass murder “beyond a reasonable doubt” because they hadn’t done anything yet. Once faced with a horrible crime like 9/11, however, we not only want to punish the perpetrators, but also demand accountability from everyone who “should have known.” In “the court of public opinion” we accuse everyone who might have prevented what was about to happen even though it hadn’t happened yet.

In her terrific new film We Need to Talk about Kevin, Scottish director Lynne Ramsay addresses all of these perilous dilemmas head on. Basing her screenplay on Lionel Shriver’s award-winning 2003 novel, Ramsay tells her terrifying tale from the point of view of “Eva Khatchadourian” (Tilda Swinton), the mother of a teenager who murdered his classmates and teachers in a Columbine-like massacre.

When the film opens, the unthinkable has already happened, and there is no question that Kevin is, in fact, guilty beyond a reasonable doubt. Kevin has been tried, convicted, and imprisoned, but what of Eva? Is she also guilty? And if so, what is the charge?

As the film progresses, Eva lays out the case against herself for all to see: she is an accessory to murder because she “knew” but didn’t act. But what did she know and when did she know it? Phrased this way, using language that has become iconic since the Watergate Hearings way back in 1973, we’re thrown back to the Kahneman quote with which we began: “‘Knowing’ is not a yes-no affair.”

In Eva’s case, she doesn’t really face what she already knows until Kevin succeeds in doing something far worse than anything she’s anticipated.

We Need to Talk about Kevin is the opposite of a conventional psychological drama. Ramsay never pretends to be an omniscient narrator, and her screenplay wastes no time speculating about why Kevin does what he does. In fact, she barely has any interest in Kevin at all, and she certainly doesn’t give him an independent point of view. 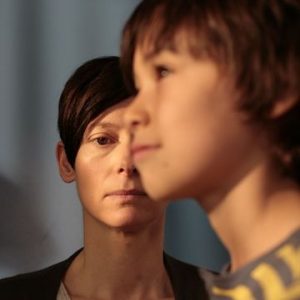 Ramsay’s film is an epistemological drama, brilliantly confined by Eva’s point of view. The person called “Kevin” is completely Eva’s construction, based totally on her recollection of various incidents from the night he was conceived to the day he went on his rampage. We never see “the real Kevin” until the end, when he’s already in prison.

“Why do bad things happen to good people?” This question (called “Theodicy” by philosophers) has been around since at least The Book of Job. If only we could blame someone—for Columbine, for 9/11, for Kevin—but Ramsay’s whole point is that real life is never so simple, and in the end, there is no consolation.

“Kevin, why did you do it?,” asks Eva on the day Kevin is to be transferred from a juvenile facility to the adult penitentiary in which he will likely spend the rest of his life. Kevin’s answer? “I used to think I knew…”

Tilda Swinton gives an extraordinary rich and complex performance as Eva (a personal best in an already distinguished career), and Ezra Miller is also superlative as teenage Kevin. This final scene of them together—“the real Eva” and “the real Kevin”—is truly heart-breaking!

SPOILER ALERT: Please do NOT read until you’ve already seen We Need to Talk about Kevin

I can tell you exactly when I first learned about cinematic “POV” (point of view).

In January 1972, at the end of my holiday break, I made a quick detour to a theatre in Manhattan to see A Clockwork Orange before heading back to college. I did this because no film up to that time had affected me as much as Kubrick’s 2001, and I didn’t want to wait for his latest to open in my local theatre.

I was right: A Clockwork Orange was a masterpiece then and it’s still a masterpiece today. And even as a college student, I immediately understood what some very prominent film critics of the day completely missed: A Clockwork Orange is first-person Point of View (POV). Is Alex a perpetrator or a victim? Kubrick expects everyone in the audience to understand that Alex is a perpetrator, but he really doesn’t care about that. The point is that, right or wrong, Alex believes he is a victim, and everything he does in the film is based on his own POV.

Decades later, many people still misconstrue first-person POV. For example, I was greatly annoyed when some of my colleagues thought the Meryl Streep character in Julie & Julia was supposed to be “the real” Julia Child. Even after Streep gave interviews in which she explained that her character was not “the real” Julia Child, but rather Julie Powell’s idealization of Julia Child, they still whined about how the film was “out of balance.”

Phooey!  The film Julie & Julia is first-person POV in which the lead character (“Julie Powell”) tells us how she recreated herself by emulating an idealized mentor (“Julia Child”). Insofar as “Julia Child” is a more interesting character on screen than “Julie Powell” is, it’s because that’s precisely the way Julie experienced Julia. Brava to writer/director Nora Ephron for taking this on; she not only made a delightful film, but also breathed new life into a great cultural figure grown dim in popular consciousness.

We Need to Talk about Kevin works on the same principle. If you leave the theatre worried that you’re still unable to explain the behavior of a sociopath named Kevin, then you’ve missed the point.

Lynne Ramsey’s subject isn’t Kevin (the sociopath); Ramsey’s subject is Eva (the sociopath’s mother). As Eva struggles to understand why she finds herself in her current predicament, Ramsay separates present tense from past tense using evocative visual and auditory clues created by the brilliant crew working for her behind-the-scenes. This is Eva’s POV, told not as events actually unfolded but in retrospect, after the unthinkable has actually happened.

Was Kevin really so oppositional (even as the toddler played by Jasper Newell)? Was Kevin’s teenage provocation ever as blatant as Eva now remembers it? We will never know. And was Eva’s husband “Franklin” (John C. Reilly) really as oblivious as the Franklin we see on screen?  Why even ask?  As Reilly said (echoing Streep) in the Q&A which followed our Chicago International Film Festival screening on 10/11/11: “My job wasn’t to play Franklin; my job was to embody Eva’s memory of Franklin.” Exactly right!

This is not a film about “mothering,” good, bad or otherwise; this is a film about the limitations of human knowledge. How often do we all act (or do not act) under conditions of uncertainty, only to blame ourselves later for not facing up to the things we already “knew” in our guts?

We’ve all been there. Sure, Eva’s case is extreme, but isn’t that what great drama is all about? Only after King Duncan is already dead does Lady Macbeth say in wonderment: “Who would have thought the old man to have had so much blood in him?”

If I ruled the world, We Need to Talk about Kevin would have received at least 6 Oscar nominations on 1/24/12: Best Picture, Best Director (Lynne Ramsay), Best Adapted Screenplay (Lynne Ramsay and Rory Kinnear), Best Actress (Tilda Swinton), Best Cinematography(Seamus McGarvey)  and Best Score (Jonny Greenwood). In the end, it was completely shut-out. But me, I still believe We Need to Talk about Kevin was not only the best film of 2011, but also the one that most illuminates our current concerns in a post-Columbine, post-9/11, post-“Housing-Bubble” world. 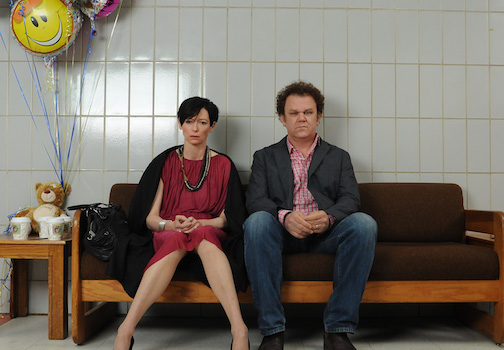 Tags: FF2 Media, Oscars, We Need to Talk about Kevin

‘The Wife’ is an intricate study of marriage