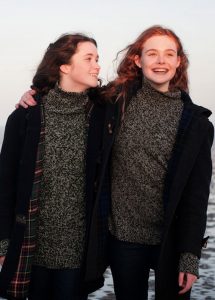 In her new film Ginger & Rosa, English filmmaker Sally Potter sets out to discover when the Fifties became the Sixties, and she finds her moment in the Cuban Missile Crisis of October 1962.

Two girls, born in the same London hospital on the day an atom bomb is dropped on Hiroshima, are now teenagers and best friends. But watching Rosa retreat into romantic fantasies, Ginger becomes increasingly frantic. Doesn’t Rosa realize that the end of the world is imminent? So Ginger turns to Bella, a visitor from America. Bella is a writer, Bella is an activist, and Bella gives Ginger a vision of future possibilities.

Despite the title (which implies two points of view), this is Ginger’s arc. Ginger is the one who literally marches forth into the Sixties, while Rosa is forever trapped in the Fifties. Ginger doesn’t have these words yet, but we know she is learning first-hand the great feminist rallying cry of the Sixties: “The Personal is Political.” “Ginger & Rosa” is more than just a “coming of age” film; “Ginger & Rosa” is a “Portrait of the Artist as a Young Woman.” (JLH: 4.5/5)

The Sixties. The Sixties. We have reached a time when the fiftieth anniversaries of momentous events during this decade of change are coming at us left and right. We recently celebrated the fiftieth anniversary of the publication of Betty Friedan’s groundbreaking book The Feminine Mystique. In August we will pause to remember Dr. King’s “I have a dream” speech, and November 22, we will mark fifty years since the assassination of John F. Kennedy. Then, come February, the media will be filled with personal memories of the first time The Beatles appeared on The Ed Sullivan Show.

“Doing the garden, digging the weeds,
Who could ask for more?
Will you still need me, will you still feed me,
When I’m sixty-four?”

Now that boy is over 70, and as “Baby Boomers” in ever-increasing numbers actually turn 64, they are scratching their heads and wondering where the time went.

In her new film Ginger & Rosa, English filmmaker Sally Potter (born in London in 1949), sets out to discover when the Fifties became the Sixties, and she finds her moment in the Cuban Missile Crisis of October 1962.

Potter begins her story in August 1945 with the destruction of Hiroshima. Two baby girls are born side-by-side in a London hospital while, on the other side of Planet Earth, an atomic “Mushroom Cloud” ascends and floats with eerie beauty high above Japan.

Ginger’s mother “Natalie” (Christina Hendricks) and Rosa’s mother “Anoushka” (Jodhi May) don’t know each other, but finding themselves alone in the maternity ward with their husbands kept waiting on benches well beyond the door (as husbands were in those days), they clasp hands and bond. The years pass, Natalie and Anoushka remain close, and their daughters become inseparable.

Technically, once this narrative prologue is over, we have actually entered the Sixties, but the characters in Ginger & Rosa don’t know it yet; they’re still living in the Fifties. Class differences have also begun to surface. Rosa’s dad has abandoned his family, leaving Anoushka to raise Rosa and her younger siblings alone. Ginger’s dad, “Roland” (Alessandro Nivola) is still at home, but Natalie senses a growing distance between them. “Ginger” (Elle Fanning) and “Rosa” (Alice Englert) are now teenagers who consider themselves best friends, but Natalie has doubts about this too. Knowing Rosa has dropped out of school, Natalie worries that Rosa’s behavior might be a bad influence on Ginger.

When she hears her parents arguing in the next room, Ginger instinctively takes her father’s side, and even after she sees with her own eyes that all of Natalie’s suspicions are fully justified, Ginger still wants to be her daddy’s girl. Roland is a writer, so Ginger begins writing. Roland is a political activist who was jailed as a conscientious objector during World War II, so Ginger starts attending Ban-the-Bomb meetings. One night after a planning session, she tells the group leader who her father is, and she puffs up with pride when “Tony” (Andrew Hawley) recognizes Roland’s name. When she tells Roland and he praises her, Ginger’s face becomes as red as her hair.

But Roland, always able to justify bad behavior in the name of “personal freedom,” finally goes too far. Unable to admit this to Natalie, Ginger turns to her godfather “Mark” (Timothy Spall) and his American houseguest “Bella” (Annette Bening). Bella is also a writer, Bella is also an activist, and Bella gives Ginger a vision of future possibilities.

Now it is October 1962; the end of the world seems imminent and Ginger is frantic. Realizing Rosa has retreated into romantic fantasies, Ginger joins a huge London protest march, clinging to Bella with one hand and her notebook with the other. “All this protesting is a front,” pronounces a male authority figure (a psychiatrist?) after Ginger is arrested. He believes what he’s saying, and in one sense he’s right. Who is the greater villain: Ginger’s philandering father or that handsome rascal Jack Kennedy, who promised a “New Frontier” but delivered a potential apocalypse? 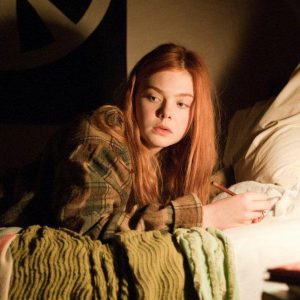 Ginger is speechless. She doesn’t have these words yet, but we see her learning first-hand the great feminist rallying cry of the Sixties: “The Personal is Political.” The protests are not just a front; Ginger, along with most of her generation, has decided to say no to the Fifties and find another way. The film ends with a rebirth as Ginger takes her first adult steps as an artist and as a woman of The Sixties.

I’m not good with titles, so I don’t know what this film should be called, but I honestly don’t think it should be called Ginger & Rosa. This is Ginger’s arc, and Rosa, like Natalie, Roland, Bella, and all the rest are supporting characters in Ginger’s story. Elle Fanning has played lovely supporting roles before (she was adorable in We Bought a Zoo and she was the only thing that made Somewhere worth watching), but she blossoms beautifully as Ginger. According to IMDb she already has two features in progress, and I am sure she will become one of the major stars of her generation. No one who sees Elle Fanning as Ginger will dismiss her as “Dakota Fanning’s little sister” ever again.

As Natalie and Roland, Ginger’s parents, Christina Hendricks and Alessandro Nivola also have room to stretch. Hendricks is best known to American audiences as “Joan Harris” (the super competent administrator on Mad Men), but this voluptuous beauty has yet to find a place for herself on the big screen. On the other hand, Nivola has made numerous well-received Indies, but I still doubt most American audiences will recognize him. If Ginger & Rosa crosses over from the art house to the multiplex—as it should—then both careers will receive a welcome boost.

Annette Bening, on the other hand, is transitioning gracefully from Oscar-nominated leading ladies to crucial supporting roles. Given only a few moments on screen, Bening endows Bella with the essential gravitas needed to help Ginger understand that her politics transcend personal melodrama. Would that every teenage girl had such a wise mentor in the background!

And Rosa? Ginger & Rosa is Alice Englert’s first feature film and she’s a knock-out. Dark and brooding, naïve and vulnerable, Rosa tries to act sophisticated, but by the end her fate is sealed. Unlike Ginger, Rosa will be stuck forever in the Fifties.

Spoiler Alert:
Please do not read until you have seen Ginger & Rosa for yourself!

It’s only March, but I’m already willing to bet that Ginger & Rosa will be on my 2013 Top Ten list. Please ignore all those critics who trivialize Ginger & Rosa as a “coming of age film” (just slightly better than the pejorative “chick flick”). I much prefer the description: “Portrait of the Artist as a Young Woman.”

How much of Ginger & Rosa is autobiographical? If you know Sally Potter’s prior films, especially The Tango Lesson and Yes, this is an obvious question. I had the great good fortune to discuss autobiography with Potter when Yes was released in 2005. Speaking about a character called “Sally” in The Tango Lesson (and played in the film by Sally Potter herself), she said: “I used my life as the laboratory to research this character, and it became a form of true fiction… And so memory and representation become forever intermingled.”

At the end of this conversation, I asked Potter why she set the final moments of Yes in Cuba, and she said: “If you want an autobiographical note, I was 14 years old when the Cuban Missile Crisis happened, and I was in my school uniform leafleting, trying to make sure that the world didn’t blow up. Maybe it was in my own psyche that Cuba held that kind of place. I wanted to see how it turned out.”

So you can imagine how excited I was to learn that Potter was about to release a film about a girl who finds her future during the Cuban Missile Crisis! But it would be a grave mistake to reduce Ginger & Rosa to mere autobiography rather than a mediation on the times—this transition from the Fifties to the Sixties—as I have described it above.

I have not had an opportunity to discuss Ginger & Rosa with Sally Potter, but my guess is that she has taken pains to capture the look and feel of this historic moment with great precision. If you were a girl during the early Sixties, then the scenes of shrinking your jeans in the bathtub, ironing your hair, and so forth, will make you howl with laughter. Will the guys get how funny—not silly, but funny—all this looks in retrospect?

The soundtrack, filled with American jazz standards, is especially important. Ginger plays her treasured 45s on a turntable that looks more primitive than an Amish horse and buggy, and yet, what magical music issues forth. There’s Dave Brubeck (“Take Five”), Miles Davis (“Blue in Green’), Duke Ellington (“Take the A Train”), and Charlie Parker (“Bird Gets the Worm”). But the numerous selections from Thelonious Monk are more than just background music. A look at their titles demonstrates their thematic weight for the female characters in Ginger & Rosa: “I’m Getting Sentimental Over You,” “I Don’t Stand a Ghost of a Chance With You,” and most especially “The Man I Love” (also sung by Christina Hendricks in a poignant solo). This music helps Roland to destroy both Natalie and Rosa, but Ginger learns from their example.

If I ever have the opportunity, here is one question I will ask Sally Potter:  In crafting your screenplay, were you conscious of possible comparisons with An Education?

An Education (Lone Scherfig’s Oscar-nominated 2009 film based on Lynn Barber’s memoir) is set in the exact same time and place (London 1962), but the tone of these two films could not be more different. Regular readers know that I fumed about the way An Education was marketed to the public, and I was outraged that most of my male colleagues took a casual “no harm done” approach in their reviews.

As I said in my own review, An Education is not a romance, it’s a cautionary tale. “David” is only outwardly charming; in reality he’s a predator, and “Jenny” is lucky that she is able to get on with her life. In Ginger & Rosa, Rosa has no such luck. Because of Roland’s perfidy, Rosa’s young life is over before it has even begun.

Click here to read my 2005 chat with Sally Potter. 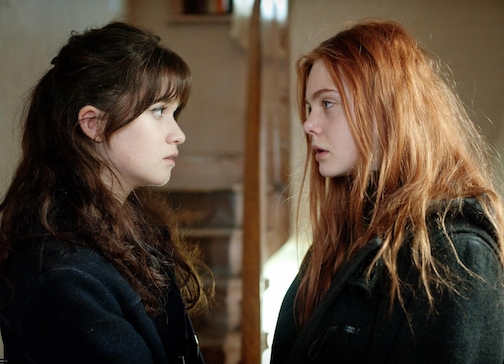