Brit Marling stars as a former FBI agent who now works for a private contractor who provides security services for prominent global corporations. In the opening moments of The East, a shadowy group of radical environmentalists calling themselves “The East” attacks the home of an oil company CEO, unleashing a Biblical deluge of “sludge for sludge.” Marling’s character “Sarah” is sent undercover with orders to infiltrate “The East.”

The plot dutifully follows the familiar trajectory of well-known films in which male stars have played cops who went undercover to bring down noxious bad guys. But “The East” updates this Hollywood formula by making the hunter a woman rather than a man, and by suggesting that this time around the prey might be on the right side of justice (if not of law).

The multi-talented Marling not only stars but co-wrote the screenplay with director Zal Batmanglij, who also directed and co-wrote their first collaboration Sound of My Voice. (JLH: 5/5)

Brit Marling? I can’t tell you the first time I heard the name “Brit Marling,” but I can tell you exactly when I first gave this name my full attention.

On November 29, 2011, Film Independent announced their list of 2011 Independent Spirit Award nominations, and me being me, I quickly noticed that no women were nominated in the Best Director or Best Screenplay categories, but one (and only one) woman was nominated in the Best First Screenplay category: Brit Marling. Digging deeper, I also saw that Another Earth(the film for which she was nominated, along with director/co-writer Mike Cahill) had also received a Best First Feature nomination and Brit Marling was listed as one of the producers.

I had heard a bit of buzz about Another Earth, enough to know it was a science fiction film, but not enough to make me rush out to a theatre to see its limited summer run. But after reading the list of Spirit Award candidates, I jumped onto Amazon and ordered the DVD, and I watched it as soon as it arrived.

Wow! I’m not generally one for science fiction, but I loved it. Yes, for those who require genre labels, Another Earth probably can be considered “Sci Fi,” but it is a totally character driven drama in which technology definitely takes second place to an examination of the heroine’s psyche. The heroine? That would be producer/screenwriter Brit Marling, who also stars in the film as “Rhoda.”

Need I tell you, Dear Reader, that I was hooked?

Less than eighteen months later, I have now seen Brit Marling on screen a total of five times. She played “Maggie” in Sound of My Voice (for which she received a 2012 Best Supporting Actress nomination from Film Independent even though I thought she was clearly the female lead in another role that she wrote for herself). She also gave excellent but definitely supporting roles in two films she did not write. (She played Richard Gere’s daughter in Arbitrage and she played Brendan Gleeson’s daughter in The Company You Keep.) And now Marling is back as co-writer and lead in The East (directed by Zal Batmanglij, who also directed and co-wrote Sound of My Voice).

In the opening moments of The East, a shadowy group of radical environmentalists calling themselves “The East” attacks the home of a Hiller Brood client. Blaming him for egregious pollution (using images that look like news footage from the Deepwater Horizon/Gulf Oil Spill of 2010), members of The East sneak into the home of an oil company CEO and pour so much disgusting stuff on his floors that it leaks down the walls: no eyes, and no teeth, but definitely a Biblical deluge of “sludge for sludge.” The head of Hiller Brood is a woman named “Sharon,” played with icy precision by Patricia Clarkson, middle-aged now but still gorgeous in a role that calls for her to be extraordinarily well-coiffed and draped in exceptionally elegant attire. Standing face-to-face, Sharon and Sarah look a bit like mother and daughter, and it is clear in context that their relationship already has this vibe. Sarah wants in on the search for The East, and after taunting her with a bit of sibling rivalry to keep her on her toes, Sharon tells Sarah she was always her top pick for the assignment.

And so, the hunt is on. Sarah goes undercover, finds her prey, and then wrestles with the soul-shaking implications.

Much of the plot mechanics are familiar from well-known films such as Serpico, Donnie Brasco,and The Departed in which cops played by Al Pacino, Johnny Depp, and Leonardo DiCaprio (respectively) lead double lives in order to bring down bad guys who are so noxious that they deserve everything they get and then some. But in The East, this Hollywood formula is updated in two ways: first the hunter is a woman rather than a man, and second the prey just might be in the right this time around.

The fact that Sarah is a woman doesn’t imply any physical weakness: she is strong and tough and exceptionally able to endure pain. But the psychology is not the same. Whether by nature or nurture or both, most men seem better able to “compartmentalize” than most women, whereas most women seem better able to “multi-task” than most men, and both of these attributes play out in The East. Sarah has a difficult time lying to her significant other “Tim” (Jason Ritter) about her whereabouts, and he is a bit more assertive that the typical female movie spouse when expressing impatience with her prolonged absences.

As for questions of right and wrong, it is no surprise that Sarah comes to sympathize with the members of The East. After all, in Donnie Brasco, “Donnie” (Johnny Depp) develops some affection for “Lefty” (Al Pacino) too. In fact, Sharon expects this, telling Sarah in her insidiously-maternal way that if she had been sent to infiltrate a wolf pack, she would soon develop feelings for the wolves.

But the members of The East are certainly not presented as criminals let alone mobsters or terrorists. The opening frames prove they are asking a legitimate question: who should pay for the Gulf Oil Spill? Is it enough that a corporation called British Petroleum paid a hefty fine, then went right on drilling? BP probably spent more money hiring scientists to hide the damage, and then paid lobbyists to spin the facts. BP wants to reassure us, convince us that the Gulf Oil Spill wasn’t as bad as it looked on TV even though we all know deep down that it was probably far worse.

And what ROI (Return on Investment) do we, the taxpayers of America, get for the money we spent on Sarah’s FBI training if, as soon as she shows promise as an FBI operative, she is siphoned off by the private sector to serve the interests of an international elite?

The members of The East (lead by Alexander Skarsgård as “Benji” and Ellen Page as “Izzy”) may be naïve to think they can change anything, but at least they’re trying. And in the end Sarah (the character) and Brit Marling (the screenwriter who created her) are asking audiences to take their efforts seriously. After you see The East you may want to disagree with me about this, but I think you’ll definitely understand why I can’t wait to see what Marling does next! 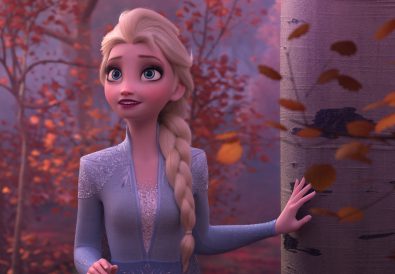