What was already a very good film about two people named “Eva”(Julia Louis-Dreyfus) and “Albert” (James Gandolfini)–both wounded by divorce and wary about trying to take a new run at love–becomes even more resonant with the tragic loss of Gandolfini (so wonderful here in what has since become his final major role).

And Toni Collette provides comic counterpoint as Eva’s ditzy BFF “Sarah” who is always bickering with her sad sack husband “Will” (Ben Falcome). They represent “the happily married ones”… EEK!

Q: Does this film pass the Bechdel Test?

3rd Photo: Eva with “Albert” (James Gandolfini). Can they make it work?

JAN RANTS!!! Note this rant contains spoilers, so beware. If you have already seen the Enough Said trailer in a movie theatre &/or read reviews of Enough Said, then please read on. But if you’re coming to this rant “cold” then please stop now & read this rant after you have seen Enough Said. Thanks much 🙂

Richard & I saw Enough Said in a preview screening at the Museum of the Moving Image in Astoria on 9/15/13, and our screening was followed by a Q&A with Nicole Holofcener (writer/director), Andrew Bregman (producer) & Julia Louis-Dreyfus (lead actress). So I seized my chance to ask a question that had been bugging me since I saw the theatrical trailer two days before.

“Nicole, you’ve just told us that your biggest challenge during the screenwriting phase was determining where to put ‘the reveal.’ And yet I was at the Angelika two days ago & I saw the Enough Said trailer, & in 90 seconds, the trailer totally gave ‘the reveal’ away. Why?!?”

HERE COMES THE SPOILER, SO STOP NOW IF YOU DON’T WANT TO KNOW TOO MUCH ABOUT THE PLOT BEFORE YOU SEE THE FILM!!!

Since they are both divorced, Eva and Marianne start sharing confidences about their ex-husbands (as most women would in such circumstances), and at a certain point, Eva begins to realize that Marianne’s ex-husband is–EEK–Albert! What to do?!? Eva’s BFF “Sarah” (Toni Collette) tells Eva to stop seeing Marianne immediately if she wants to preserve her relationship with Albert, but Eva is already hooked: “If someone had been to a hotel and told you not to go there because it was really, really bad, wouldn’t you want to know???”

Most of Enough Said’s Act II is focused on this reveal. (What does Eva know & when does she know it? How does all this info about Albert–told, of course from Marianne’s POV–change Eva’s feelings toward Albert? When does Albert find out? How does “Eva’s deception” change his feelings toward her?) Well, in tribute to all of JLD’s years on Seinfeld, let me just say “Yadda Yadda Yadda” 😉

But by giving ‘the reveal’ away in the trailer, the marketing department has gutted a wonderful film and destroyed a great deal of Nicole Holofcener’s hard work. Why?!?

When I asked Holofcener my question, Andrew Bregman (the producer) jumped in & said: “People want to know what the film is about & you came tonight anyway, so that’s proof that it really doesn’t matter.”

But then Holofcener said (very thoughtfully): “You know, in early screenings, I used to get a really satisfying ‘Aha!’ from audiences when they got to the reveal… but I don’t get that anymore…”

Only after we were all in the lobby later did I realize the irony: Enough Said is about how what we already know necessarily affects what we think, and therefore what we are likely to do in new situations. In this case, knowing too much too soon affects what viewers see and destroys much of the hard work done by a very talented filmmaker who is trying to draw you into her story in her own way.

Who loses? Julia Louis-Dreyfus because she loses audience sympathy too soon. Who wins? James Gandolfini because he gets more audience sympathy than he should. And you can clearly see this imbalance reflected in very prominent reviews which ignore the fact that Eva is the main character (Julia Louis-Dreyfus is in almost every scene) and tilt too much towards Albert (even though, in this context, Gandolfini is a Supporting Actor & not a Lead Actor).

A further irony lies in the title. Asked to explain it in the Q&A, Holofcener said: “At the end of Enough Said, Eva understands that Albert isn’t going to change, so if she wants to continue with the relationship she must accept him as he is.”

Now that may have sounded fine before, but it sounds tragically hollow now. Marianne’s major complaints, of course, concern Albert’s weight. (D’uh! Albert is played by James Gandolfini!) Marianne becomes obsessed with Albert’s weight and when he refuses to change, she ends the relationship. Accept him as he is?!? James Gandolfini also refused to change… and now… he is dead… 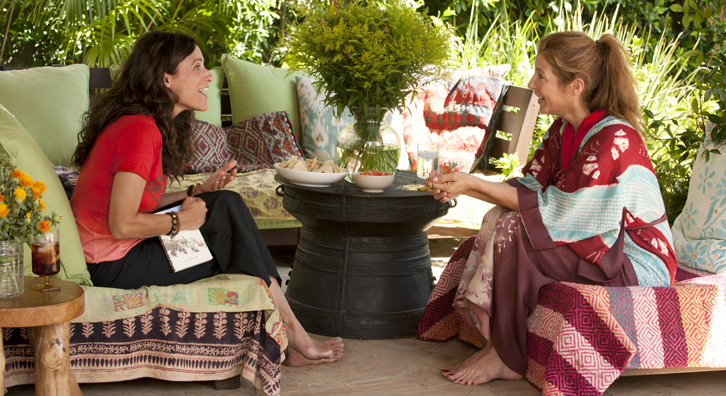 NOTE: Quotes from the Q&A come from my memory, so they may not be exact, but I think they’re pretty close. But human memory is inherently flawed, so I apologize if I have inadvertently said anything misleading.

We were at MMI to celebrate its 25th Anniversary! Kudos to MMI & thanks to Liz Moran for making sure we had tix 🙂