At a pivotal point in the film Lawrence of Arabia, which even after all these years continues to be my all time favorite film, there’s a conversation between two people. One is Jackson Bentley, a journalist modeled on Lowell Thomas, and the other Mr. Dryden, a diplomat played by Claude Rains. Bentley is trying to find out what’s going on behind closed doors between T.E. Lawrence and General Allenby and Mr. Dryden delivers the fabulously astute line, “Inevitably one of them is half mad and the other holy unscrupulous.” Well, for me, that line seemed to sum up the bizarre film Art and Craft. (JLH: 3/5)

Mark Landis is a mentally disabled man now in his mid-60s who seems to have lived most his life under the wing of a very protective and devoted mother. When she died, she left Mark enough money so that–combined with his Disability payments–he can pretty much to whatever he wants to do… and what Landis whats to do is create copies of minor art works and then “donate” them as a “philanthropist” to art museums. The bulk of the documentary travels with Landis to regional art museums often in small cities in the South but sometimes as far afield as Cincinnati. The people at the regional museums he visits are clearly not interested in digging into the details of these Landis “gifts,” and they take his copies on faith.

Landis’s process of copying the paintings begins in his room with the romantic, noir Turner Classic Movies channel playing in the background. His “talent” is the ability to copy paintings stroke-for-stroke. Using cheap frames from a big box store, he pours coffee over them to make them appear older and finishes them off by creating a faux identification of provenance for the painting. With a forged certificate from the likes of Christie’s or Sotheby saying it’s an original work of art, he visits his target museums claiming a deceased relative has donated the painting to the institution.

It is almost unbelievable, but clearly Landis has succeeded with this charade for quite sometime. Having seen other films about art forgeries and replications, it doesn’t seem to me like extraordinary analysis is necessary to discern that a frame has been artificially aged by coffee. Since a chemical analysis would be able to reveal the coffee quickly, it’s difficult to understand how people were so blindly receptive to his “donations.”

Then Mark Landis falls under the scrutiny of Matthew Leininger at the Cincinnati Museum of Art. Leininger become convinced that a donation is a fake, so he starts looking into other Landis donations. Leininger quickly zeroes in on a trail of fakes and finds multiple copies of paintings Landis had claimed were all originals.

Art and Craft cuts back and forth between Landis–still painting then “donating”–and Leininger (who is obsessed with exposing him). It is incredibly sad to watch Landis thrive in the eye of the camera, while Leininger–who carries himself a bit like Peter Falks’ Colombo–becomes the ultimate Landis victim. Now, as the hero of Art and Craft, Landis is touring the country as an Indie cult hero, while Leininger–who let his obsession with Mark Landis take a hold of him–has apparently destroyed his own career in the process.

Since no money is exchanged when Landis “donates,” experts say Landis is technically not committing fraud, but this quease-inducing film gave me a feeling of vertigo. Mark Landis is making “donations” and museums are accepting them, paying insurance on “art objects” that they don’t really own, and valuing things that have no valuable–or at least they didn’t have value before Landis found his own celebrity as an eccentric…

Shouldn’t Christie’s, Sotheby’s, and the others who have had their brand’s documentation fabricated be infuriated? Where is their side of this story? But instead, Art and Craft treats Mark Landis with tenderness. Why?

The person I really felt sorry for was Matthew Leininger, a man who is clearly trying to do “the right thing,” but instead gets caught up in a bizarre cultural love affair with a crazy little man. Although some might see Landis as harmless, he is not; Landis is doing real damage. There’s a very poignant conversation between Leininger and Landis when they finally meet face-to-face at a museum which is exhibiting “the work” of Mark Landis! Landis is the event’s special guest star; Leininger is on the sidelines, reduced to the role of hanger on. If I ruled the world, Leininger would be front and center, but I guess the real Lieutenant Columbo characters in this world don’t have the “right” charisma.

Q#1: Does Art and Craft pass the Bechdel Test?

No, it does not past the Bechdel Test.

There are very few women in this film. A couple of people at the target museums were women, but they never talk to each other. There’s a very poignant conversation when Leininger and Landis finally meet because this museum actually does an exhibit of the work of Mark Landis. Leininger is invited to come and, strangely, they finally meet. So here’s Mark Landis who’s the star of the day and here’s Matthew Leininger on the sidelines as kind of a hanger on and, to me, he was the hero of the film.

Richard and I were at the Angelika Film Center on trendy Houston Street on September 19th when Art and Craft premiered in New York, and we saw Jennifer Grausman and Sam Cullman there for the Q&A, with Mark Landis standing between them.

Landis is a tiny little man with a very soft voice. He was repeatedly urged to keep the microphone close to his mouth, but he just let it slip down again and again while he talked on and on in a bizarre reverie. The screening room at the Angelika is very long, thin, and narrow, so I’m sure most people in the packed theatre couldn’t hear a thing except the people in the front laughing.

I kept asking myself: “What are they laughing about?!?” Here’s this guy, Mark Landis, who’s obviously ill and unscrupulous, and yet he is being turned into a cult figure…

Alas, Richard and I both agree that the Art and Craft filmmakers had fallen in love with a “hero” who should really be institutionalized. They were there “to serve” him. They stood guard on his left and his right and barely said a word about their own roles in finding/funding/filming this story… 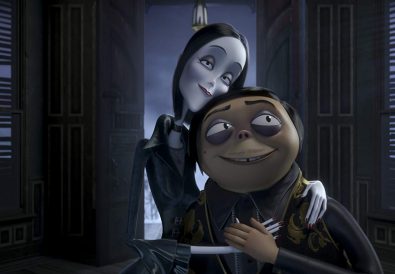