These boots are made for walking … quickly out of the theater.

Karen Leigh Hopkins’ bizarre Miss Meadows tells a dark, sometimes-funny story in the world of an elementary school teacher moonlighting as a vigilante.

Katie Holmes is perfectly cast as the eccentric, prim-and-proper “Miss Meadows,” a poetry-loving teacher who tap dances down the street to the beat of her own drum. In the opening sequence, Miss Meadows smiles and waves to a chirping bluebird, admiring its colorful hue in her gray, gloomy neighborhood. Her bliss is interrupted when a pigheaded truck driver pulls up beside her, taunting and threatening her to get in the car. But Miss Meadows simply unclasps her small white purse, pulls out her handgun, and shoots him in the face. With only a sprinkle of blood on her dress, Miss Meadows places the gun back in her purse, returns to reading her poetry, and tap dances her way down the street. She then calls her “Mother Meadows” (Jean Smart) on the phone to remember the protocol of removing bloodstains from clothes. (Note to self: only lemon and water!)

On her way to school, Miss Meadows stops in the middle of the road to pick up a lonesome toad and meets “Sherriff,” (James Badge Dale) a hunky townsman intrigued by her odd behavior. “Think he’ll turn into a prince when I kiss him?” she says with almost childlike joy, and the sheriff is immediately smitten.

Back in the classroom, joyful substitute Miss Meadows encourages the children to write Get Well cards for their former teacher and promises she’ll be healthy again shortly. All is fine and good until one student, “Heather” (Ava Kolker) sitting angrily at her desk, tells Miss Meadows that the sick teacher won’t be coming back. Heather is by far the darkest, saddest little girl in the classroom, so Miss Meadows has an instant connection with Heather, sure that she, too, has a tormented childhood.

We flashback to blurred scenes of Miss Meadows as a toddler, holding a bouquet of flowers as blood drips on her tiny white ruffle socks. But in the present day, Miss Meadows’ romance with Sheriff deepens, her own childhood tragedy unfolds, and she continues her self-proclaimed role as the female-Dexter (in vintage clothes and hair bows, no less).

Although there were many flaws to this movie, Holmes’ performance as the whimsical, psychotic Miss Meadows is the best role she’s had since 2003 as April Burns in Pieces of April and her signature role as tough girl-next-door Joey Potter in Dawson’s Creek. The Miss Meadows character is a mix of happy, funny, motherly, and extremely disturbed – and Holmes pulls it off extremely well. The cloudy, rainy background makes for an interesting setting and the music lends a hand to the “comedy” part of “dark comedy.”

Everything else, however, is simply bizarre. It was too comedic to be a psychological thriller, but not comedic enough to be enjoyable. The portrayal of her tragic childhood was over-the-top and melodramatic, as well as her vigilante shootings of an escaped convict and a molesting priest. Unfortunately, Hopkins’ odd Miss Meadows, even with a talented cast and a picturesque world, fails to tell a believable, compelling story.

Bottom Photo: Katie Holmes in one of her over-the-top “Miss Meadows” outfits.

Miss Meadows speaks with her mother (Jean Smart) on the phone on a regular basis, and befriends her student, Heather, taking on a protective role.

She also has a neighbor, “Mrs. Davenport” (Mary Kay Place) who complements her extravagant flower garden and warns her about bad people in the neighborhood. But when Mrs. Davenport suggests setting her up on a date, Miss Meadows refuses, telling her neighbor that she doesn’t need a man in her life. Then Mrs. Davenport disappears as Miss Meadows becomes engrossed in her relationship with the Sheriff. 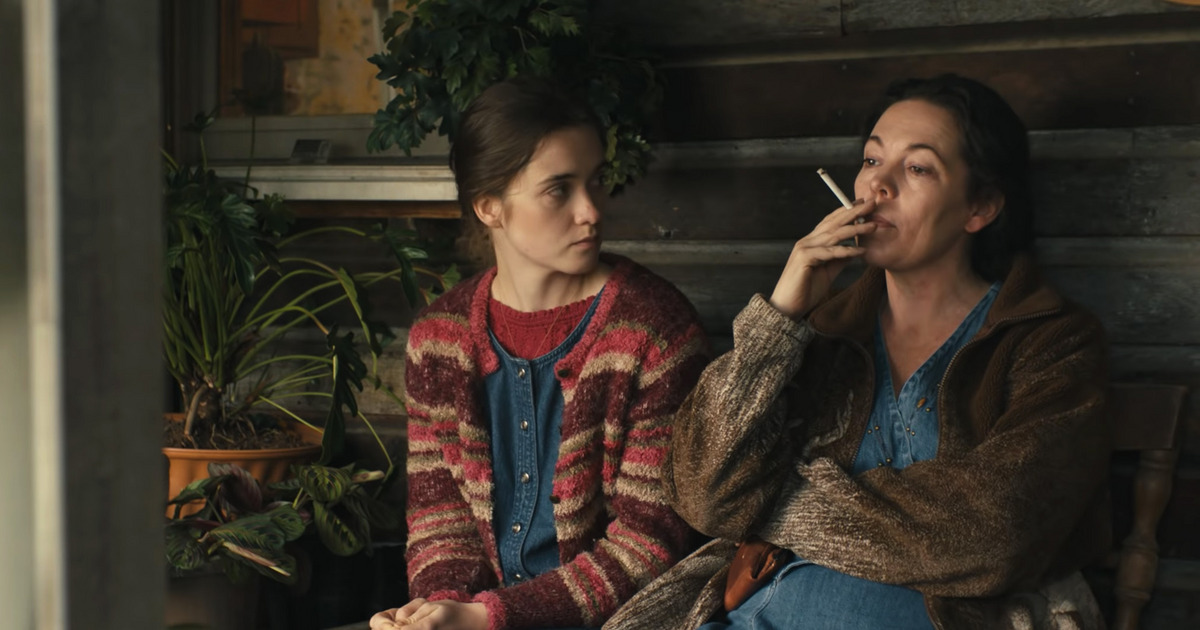