A view from two generations …

Tiny group of “posh” young men–all students at Oxford University–try to live up to legacy of privileged debauchery, but alas, they live in the wrong era.

Directed by Lone Scherfig. Screenplay by Laura Wade based on her own play Posh. (JLH: 4/5)

The Riot Club is a very sad film about a group of young men who have been told all their lives that “boys will be boys.” Now in college, they know that manhood brings responsibility, so they intend to do as much carousing as possible while they still can.

The problem is that even they know their behavior is boorish. So they drink too much and take too many drugs, and they basically challenge one another to see who can be the most excessive guy in the room. And their behavior grows more and more desperate until–finally–something terrible finally happens…

Q: Does The Riot Club pass the Bechdel Test?

There are only three female speaking roles in The Riot Club, and in each case a beautiful young woman is speaking either to one man or a group of men. But you can hear what they would say to one another if they ever did happened to speak face-to-face: “These boys are cute, but they are so tedious!”

Special shout-out to Natalie Dormer who plays the difficult role of “Charlie.” Charlie is a sex worker with a strong sense of self-worth. When the guys push her, she pushes back. It’s a relatively short but very powerful scene, and Dormer hits a home run. Kudos to director Lone Scherfig for knowing how important it was to invest in the right actress. Natalie Dormer cut her teeth playing Anne Boleyn in The Tutors!

Lone Scherfig tells a hard-to-watch tale of 10 university students basking in the glow of wealth and entitlement. Viewers spend a tiresome 100 minutes with unlikable characters as they haze naive new recruits into their posh Riot Club. (BKP: 3/5)

“Boys will be boys,” is the bond that binds together a group of ill-mannered, upper-class Oxford University students. When elite “Riot Club” is in need of two new group members, the college boys engage in brutal hazing situations, including blindfolding “Alistair Ryle” (Sam Claflin) and “Miles Richards” (Max Irons) and making them drink a concoction of spit, boogers and maggots. They drink, they get kicked out of bars and they drive around with puke-stained windshields. Everything about The Riot Club, supposedly filled with the best and the brightest young people, is unruly, pathetic and violent.

The dialogue, based on Laura Wade’s British stage play Posh, is used to fully characterize each person, for example, having one privileged Riot Club member scream, “I am sick to death of poor people!” Similar dialogue and attitudes are abundant for the remainder of the film as the boys get out of control. Eventually, their brutal actions catch up to them and they are forced to face the consequences.

The quiet moments between Miles and his girlfriend “Lauren” (Holliday Grainger) provide the just enough heart to sustain the tough-to-digest film. Their relationship gives the audience a sense of morality and relief while so many scenes consist of the crude, rambunctious antics. Aside from the romantic highlights, there is a disconnect between the audience and their lack of empathy for these characters. Even when one of the Riot Club members gets robbed at an ATM machine, his smarminess gets in the way of feeling bad for his situation. Scherfig gets her point across, however, and makes a grand statement on her attitudes of the wealthy.

The acting is on point, believable with every male in the shoes of their respective, arrogant roles. Although including strong performances and an important theme of privilege, the film does not make for an enjoyable watch. 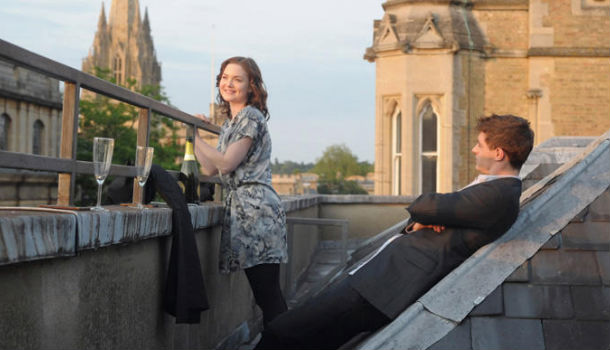 Middle Photo: “Harry” (Douglas Booth) at his peak of ecstasy.

THE SISTERHOOD OF NIGHT

SHADOWS FROM MY PAST