Director Janina Quint explores the continued complexities of the relationships and interactions between Jews and Germans, in the direct and continued aftermath of World War II. Through talking head interviews, images of German life from then and now, and a continued thread of a Jewish/non-Jewish German dinner party, Germans and Jews attempts to answers the questions of how these two nations see one another and themselves. (EML: 4/5)

The documentary opens with a question, what is the relationship between Jews and Germans today, decades after the end of the Holocaust. Do both sides still carry around the weight of the atrocities that directly affected their parents or grandparents? Is there still fear, guilt, mistrust?

Centered around a dinner including both Jewish and non-Jewish Germans, director Janina Quint’s Germans & Jews attempts to answer all of these questions by exploring the multi-layered relationship between Jews and Germans within the generations following World War II. Focusing primarily on German history and the way that German society responded to the war in the successive years, the documentary attempts to identify the remaining vestiges of mistrust between Germans and Jews.

For Germany’s part, the years directly following the war were ones of silence. In interview after interview with non-Jewish Germans who had been children during the war, the response is the same; their parents didn’t want to talk about it. They existed in this weird limbo, wanting to mourn the loss of those who had fought and died but recognizing that this war was not something to be proud of. Parents who had served and survived didn’t know how to explain to their children what they had done, justify their actions or lack thereof.

In the 1960s, the next generation of Germans began to fight back, using World War II as the cornerstone of their rebellion against their parents. For many, the release of a miniseries on the Holocaust was the first time that the true nature of the war had been revealed to them and these Germans no longer wanted to sit silently. It is out of this movement, that Germany builds monument after monument to the innocents lost to the Nazi regime. 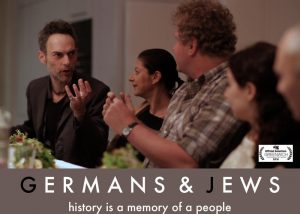 One of these reminders, the Stolperstein (gold stones with names and dates of victims) are scattered all throughout Germany, providing a type of final resting place for those that have none. In one interview, a non-Jewish German talks about the existence of two such stones right outside of her apartment. For her, these stones are necessary and not at all intrusive. She feels it is important to have the reminder, every day when she leaves her home, that there was once another woman who lived there, who cooked there, who slept there, who considered herself a member of German society and that this woman was taken from her home for no reason other than being Jewish.

Another woman, talks about how she cleans the stones in her community, wanting to ensure that they don’t lose their gold sheen and continue to catch the light for passerbys. She tells of a letter she received from two Jewish American women who come to visit their family’s stones yearly and were shocked to find the stones cleaned and each with a rose. In the letter, the women express their gratitude and surprise at the act, which brings the German woman to tears.

But of course, there is the flipside to this story, the post-war Jewish experience in Germany, which seems to be very different depending on where Jews came from before or after the war. For those of the next generation, those whose parents returned to Germany following the war, living in Germany and identifying as German remain separate. While they can live within the country, they do not call themselves German and see themselves as their own community. Those who fled the oppression of the USSR, however, find Germany to be a safe haven.

While the documentary does provide an interesting perspective and starts to really pull back the layers to identify the residual effects of World War II on the relationship between Germans and Jews, it doesn’t always hit hard enough. The film’s strength lies in the outbursts of honesty at the dinner party or the quiet reveals in the one-on-one interviews. The moments in which the participants forget their political correctness and express their true fears.

For Germans, a sort of tip-toeing attitude around their Jewish friends and neighbors, a feeling of continued guilt coupled with an animosity for carrying the weight of an atrocity they did nothing to earn. For Jews, a residual fear of rejection and persecution, despite the greatest intentions and a continued identification as other. While the dinner party sequence is a start, the film would benefit from allowing a stronger focus on the communication between the two parties, rather than an examination of each as a separate entity, within their own element. 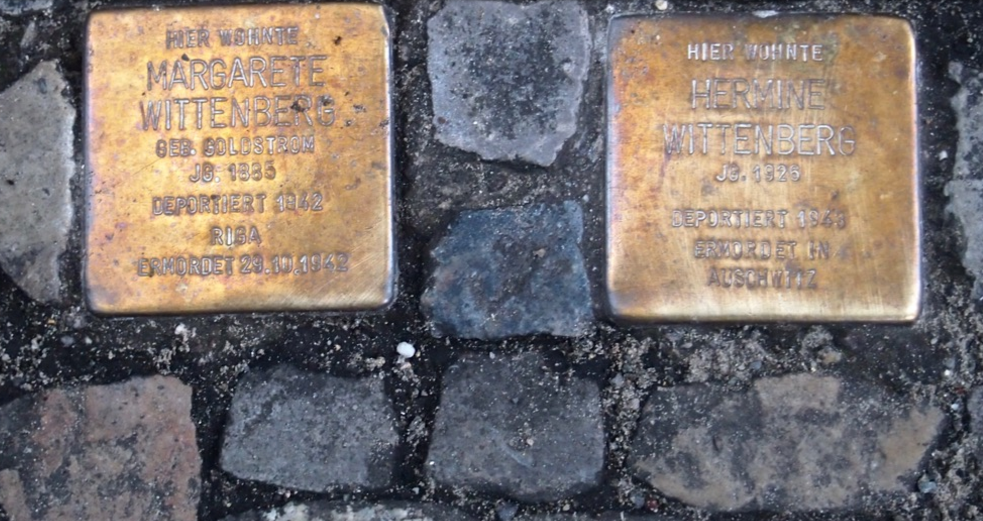 Top Photo: The poster for German & Jews, a documentary by director, Joanna Quint.

Middle Photo: Jewish and non-Jewish Germans enjoy a dinner together, discussing their varied perspectives on the Jewish/German relationship in a post-Holocaust society.

Bottom Photo: Two examples of the stolpersteins throughout Germany, representing the victims of Nazism, often found outside of homes formerly owned by Jews who were deported and murdered.

Since the documentary is mainly talking heads style, there aren’t really any conversations between anybody, including conversations between two women. While women do speak to one another at the dinner table throughout the film without referring to men, these conversations are never exclusively between women and therefore do not serve to help this film pass the Bechdel-Wallace Test.