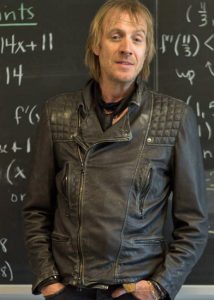 Len and Company is Tim Godsall’s film (co-written with Katharine Knight) about a famed music producer and his somewhat disastrous relationships with his timid son, his troubled protégé, and an unlikely teenage friend. It’s not quite a story but it’s fun. The wry dialogue is entertaining, even though the emotional developments of most of these characters are awkward and contrived.

The movie should just as well be called Len because Rhys Ifans (without much help from the rest of the cast) portrays a worn out, disheartened, and irascible rock star who is nevertheless charming, and most importantly, believable. (PS: 3/5)

“Len Black” (Rhys Ifans), a former rock ‘n roller and leather jacket enthusiast, quits the music business and seeks seclusion, only to find his life intruded upon by youngsters.

What follows is a familiar narrative strategy: the brilliant but crass musician somehow wrongs all the above relationships and then miraculously mends them. “Max” (Jack Kilmer), his gentle and timid son, suddenly arrives to stay with Len under the pretense to a simple visit. This long-haired, inexpressive, and well-behaved boy who quits college to hang out with fellow potheads in order to pursue his music career wants his own father to listen to his demo but is too afraid to ask. This “major” conflict–taking up more than half of the screen time–is as interesting and intense as a five–year old boy wanting ice-cream before dinner.

Then there is “Zoe” (Juno Temple), a supposedly talented but deeply troubled teenage singer, who is hurt when her mentor and producer–Len–walks out on her in the middle of a music award ceremony. She visits Len unexpectedly one night to demand respect and love. The young star, looking like a failed candidate for the Mickey Mouse club, has a tendency to drink beers, pop pills, and curse once in awhile in an attempt to assert her carefree spirit.

On top of that, we also have “William” (Keir Gilchrist), a harmless boy from the neighborhood who just really wants to be friends with the burned out legend. Len uses him as free child labor. Why is it necessary to introduce a lukewarm plot from Up? The filmmakers answered that by simply asking – Why not?

As a story, Len and Company is lazy, flat, and clichéd. There’s nothing new for the audience to experience, and a dull plot only seems duller when the protagonist duplicates his emotional experience with three different characters and especially when only one of the four feels like a person. Strenuously pulled by different narrative threads, the movie trudges through its 100 minutes running time, with each trope painfully felt. 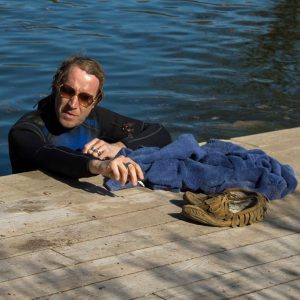 The children, hardly three-dimensional, are inexplicably whiny and exhausting. And just like Len, the audience has the inclination to run away from them. Despite his angelic face and pensive calmness, Jack Kilmer continues his portrayal of an easily frightened boy after Palo Alto, while a usually endearing Juno Temple, holding more emotional depth than a piece of blank paper, hardly convinces anyone that she is a Pop Princess. But what is worse might be the on-screen chemistry between the two. An unlikely pair, Mr. Kilmer and Ms. Temple have a better chance at playing siblings than lovers.

An already crippled plot might be further reduced by low production values. Granted not a musical, the lack of music in the movie is glaring as all the characters are bound by one passion that is absent. The awkward duet between Ms. Temple and Mr. Ifan only demonstrates that neither is musically well endowed. Perhaps the production budget should have included a voice coach?

What holds is Mr. Ifan’s charms. The viewers find themselves thoroughly enjoying Mr. Ifan’s cynicism and less of a regard for everyone. However, the sporadic moments of brilliance are better served as sketches than narrative developments.

Definitely not the worst movie made about this genre, Len and Company, armed with its thin plot and one interesting character, is capable of entertaining and even inducing some genuine laughs. However, perhaps a lesson to take away from this is that the age-old saying – “the more, the merrier” – does not apply to undeserving subplots.

Middle Photo: Len in his pool.

Q: Does Len and Company pass the Bechdel-Wallace Test?