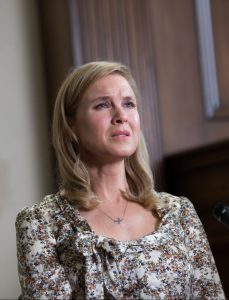 Director Courtney Hunt’s thriller stars Keanu Reeves as a defense attorney for a high school senior accused of murdering his father. Although the courtroom drama feels like an extended version of a Law and Order episode, the performances and twisty script keep you in 93-minute-long suspense. (BKP: 4/5)

Mr. Lassiter, in the bedroom, with the knife. Guilty. At least, that’s the verdict 18-year-old “Mike” (Gabriel Basso) is facing in the courtroom as his straight-laced lawyer, “Richard Ramsay” (Keanu Reeves) pleads for his innocence.

Rafael Jackson’s screenplay takes you through the tumultuous days of past and present, centering on Mike’s relationship with his stiff and withdrawn mother, “Loretta” (Renée Zellweger) and abusive father “Boone” (Jim Belushi, impressively veering off the comedy track into a dark, disturbing role).

Their backstory is chock full of verbal and physical abuse, Mike’s inner turmoil and incidents that led to the cold-blooded killing of piggish Boone Lassiter. Viewers witness Ramsey’s aggressive fight for Mike’s acquittal, hoping for an eighth-round victory much like his hero, Muhammad Ali in the 1974 match against George Foreman. He has help, however, in a young associate, “Janelle” (Gugu Mbatha-Raw), the compass in an otherwise morally ambiguous cast of characters. 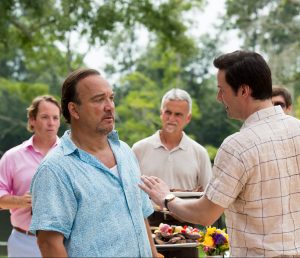 Performances outweigh story here, with young Basso saying more with his eyes than with his few lines of dialogue. As a breakout young actor in recent years, from Steven Spielberg’s Super 8 and Meg Ryan’s directorial debut Ithaca, Basso has perfected the role of a timid teen with bubbling inner angst.

Unsurprisingly, the presence of leads Reeves and Zellweger are enough to keep your eyes glued to the screen. In a complete reversal from the awkward, lovelorn Bridget Jones role for which she’s best known, Zellweger transforms into a steely widow who’s been beaten down physically and mentally by bully of a husband.

Since the bulk of the script takes place in the courtroom, Hunt uses a variety of approaches to make every scene fresh, as if you are watching the trial from both the witness stand and with the members of the jury. Making viewers feel as if they belong in the room is half the battle, and something Hunt easily accomplishes.

Although critics may frown upon the last-minute “shockers” that might not be as shocking as intended, this suspenseful courtroom thriller is a nail-biting, engaging watch. And with Reeves at the wheel as protagonist Ramsay, The Whole Truth is nothing but enjoyable. So help me God.

Q: Does The Whole Truth pass the Bechdel-Wallace Test?

‘Woodstock: Three Days That Defined A Generation’ a nostalgic reminder of a poorly run festival