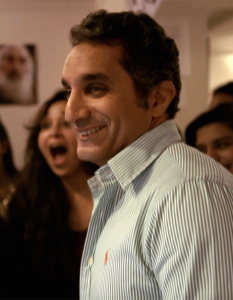 Written and directed by The Daily Show producer Sara Taksler, documentary Tickling Giants accounts the life of an Egyptian doctor who challenged authority with humor on his own popular TV show. Bassem Youssef’s journey from Internet sensation to wildly popular commentator is entertaining and eye-opening. His transformation from surgeon to “Egypt’s Jon Stewart” is a refreshing take on how to handle political turmoil – leave ‘em laughing. (GEP: 4.5/5)

“I love sarcasm,” Dr. Youssef says in an opening sequence of Tickling Giants. “It lets me cut through people’s facades without spilling any blood.” He does so through his own immensely popular satirical talk show, beginning in 2011 and telling the hard truths that the Egyptian news media didn’t (sound familiar?). 40 percent of Egypt’s population tuned into his show’s second season, a completely unprecedented feat in the Arab world.

The Daily Show super-fan is shown traveling to New York to meet Stewart and appear on his show in 2012 – an experience that can be appreciated by fellow fans that would revel in the opportunity to make their heroes laugh. 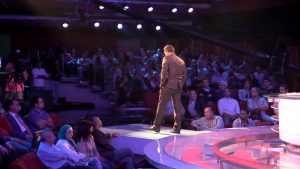 Youssef’s story is fascinating, and his outlook on life and comedy is admirable – one way to deal with the unpredictable tumult of the political world is to see the humor in it. It’s a lesson many Americans need to learn, especially under the current administration – we just have to laugh, even when things don’t feel the least bit funny. For Youssef, it means taking to the streets or telling jokes even when it’s overwhelming or downright dangerous.

“When you laugh at authority, it won’t be easy to control us anymore,” Youssef and his writers remind us. It’s what got us through last year’s brutal election, whichever side you were on – or if you were too exhausted to even pick a side. When politics are tiresome, when the government or our fellow voters seem to be letting us down over and over and over again, there will always be late-night TV in America. There will always be jokes. There will always be Seth Meyers and Trevor Noah and Chelsea Handler. Egyptians aren’t so lucky – another important lesson Youssef’s story teaches about the implications of poking fun at a powerful government.

Tickling Giants is funny, informative and sad all at once. Taksler clearly knows her stuff thanks to her time at The Daily Show, but the story she tells doesn’t feel subjective. It isn’t one-sided or uncomfortable to watch, but instead an honest look at the catharsis of comedy and the consequences of the truths it dares to uncover. 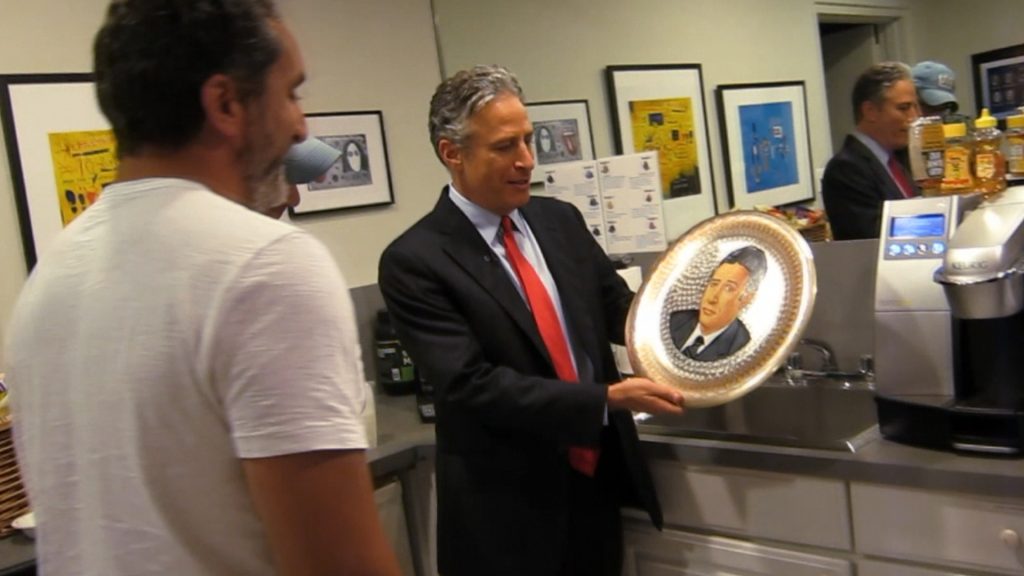