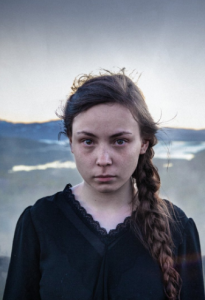 Sami Blood is writer-director Amanda Kernell’s foray into the Sami culture in the 1930s, in which her indigenous people were treated as inferior to the Swedish and were essentially forced to neglect their culture and themselves. (GEP: 4.5/5)

I first had the opportunity to screen Kernell’s Sami Blood (Same Blod) at the Gene Siskel Film Center in celebration of the Chicago European Union Film Festival in March. A quarter of the films screened throughout the month were directed by women, a record high for the event. Because I viewed Kernell’s feature along with three other films, including Lone Scherfig’s indomitable Their Finest, it unfortunately blurred into the background of other stories deemed “the best of the fest.”

Sami Blood deserves much more credit than I gave it upon initial viewing—its intricate themes about ethnicity and loyalty to one’s background are moving and important, but its dark tone and slow pace keep it from being universally appealing. The most important role it plays is telling a little-told story about the history of a culture that has been abandoned and forgotten in the last century, and why one girl in particular would make the tough choice to leave it behind.

“Elle-Marja” (Lene Cecilia Sparrok) is adolescent Scandinavian girl who grew up in the Sami culture (Kernell’s background) in the 1930s. She attends a Swedish boarding school and has no choice but to decide between assimilating or staying true to her background. Her ultimate decision to leave her native life behind is made clear in the opening sequence, in which Elle-Marja attends the funeral of her sister, who stayed loyal to her Sami upbringing and continued their tradition of herding reindeer. 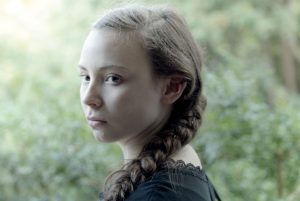 The majority of the film is a flashback to their boarding school days, in which the Sami part of Elle-Marja and her fellow people is considered “lesser than” others. This prejudice is painfully illustrated in certain scenes, such as medical examinations that determine arbitrary differences in Sami people, like forehead length and dental work that supposedly make them inferior. These exams are humiliating, and the way Kernell subtly depicts Elle-Marja’s embarrassment and completely unnecessary mistreatment because of her ethnicity is so well-done that it becomes infuriating for audience members who might not have understood her plight until this moment. Your instinct to judge her disloyalty to her culture is transformed into empathy as her early-teen days make up the better part of Kernell’s coming-of-age script.

In an earlier sequence, a strict teacher tells Elle-Marja to “speak a language we can all understand,” and slaps her hands for speaking Sami in the classroom. This moment stings, especially as Americans are seeing a frightening upsurge in the slightly-threatening “speak English” sect. She has to deal with fitting in at school, meeting boys and figuring out her future—difficult enough tasks for any teenager, even when no one’s stopping you from speaking your own language or condescendingly measuring the length of your forehead.

Kernell told FF2 Media that this part of history is “still an open wound,” but isn’t examined nearly enough. She likens it to the Native American experience in the states, in which an entire group of people was cast aside, beaten down and forced to make a choice between loyalty and marginalization or assimilation and acceptance. Some Sami chose to cut ties completely with their beginnings, and the story of Elle-Marja and her sister choosing different paths is intriguing and upsetting all at once. You might not agree with her choice to separate from her culture, but as the film progresses you will begin to understand it. Kernell’s script works backwards to show how Elle-Marja reached where she is today, and this is where the personal attachment to the work shines through.

Sami Blood is proof that sometimes a film must be viewed more than once (with a bit of research in between) in order to truly appreciate its themes. I was able to delve further into Elle-Marja’s painful process from loyal Sami reindeer-herder to an elderly Swedish woman looking back at the origins she chose to remove from her identity—an impossible decision that becomes easier to understand as we walk with her through her prejudice-riddled adolescence. Her journey is difficult to watch, but that’s a good thing—it makes Kernell’s story-telling all the more compelling and heartbreaking. 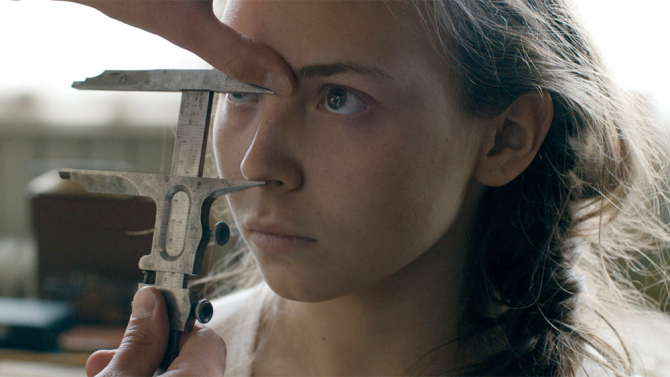 Top Photo: Sparrok as Elle-Marja in the painful but meaningful work of historical fiction that is Sami Blood.

Middle Photo: Sparrok is a truly outstanding young actor with remarkable who is in almost every scene. Her emotional range as Elle-Marja is remarkable.

Bottom Photo: Elle-Marja undergoes a humiliating medical examination of the indigenous genes that make her “inferior.”

Absolutely. This is entirely Elle-Marja’s story, in which she decides who she is and what culture she will align herself with. She does get attacked by males and befriends one special boy in particular near the middle of the 110-minute feature, but even he is influenced by the prejudice of the era. The purpose of the film is to show one girl’s heartbreak and painful choice to change her life and identity, in contrast to that of her sister.

THE SHAPE OF WATER (2017): Review by Brigid Presecky