A nostalgic road trip movie, Pop Aye, follows the relationship between an unusual pair—architect and elephant—as they encounter a diverse range of people on their journey. Having received many international awards for her previous short films, writer-director Kristen Tan brings to the screen her heartwarming and down-to-earth debut feature. (KIZJ: 4.5/5)

Somewhere in the countryside of Thailand, a man, “Thana” (Thaneth Warakulnukroh), and an elephant, “Popeye” (Bong), walk down the roadside together. Failing to hail down a truck whilst walking, Thana sits on a pipe as he waits for the next vehicle to drive by. A truck driver finally agrees to take them and the two men lock Popeye into the bed of the truck. However, it isn’t long before a disagreement in the front seat leads to the architect and the elephant back on the street again for the night.

Tan then takes the story back in time to the bustling city of Bangkok, before Thana and Popeye’s lives crossed paths. Popeye is performing on the streets as a circus elephant, and Thana is an architect whose successes are gradually being forgotten. Thana’s distaste and disappointment in the city is clear when he describes Bangkok as a place, which “takes you in, as quick as it spits you out.”

Thana spots a young employee slaving away at an unfinished project after hours and sends him home, choosing to finish it in his stead. However, it isn’t until the morning that he finds out the meeting with the client was moved without notifying him. The architect feels himself being valued less and less at work as the company prepares a younger employee to take over his position. His personal life is also losing its spark as he and his wife, “Bo” (Penpak Sirikul), are in a clear disconnect. Bo looks at Thana with tired and hopeless expressions, unwilling to put in the effort to revive their marriage. 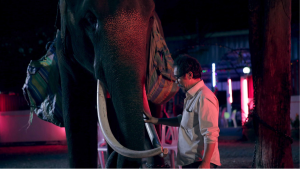 Pop Aye is a film scattered with small acts of kindness, and illustrates the power and effect such acts can have in a harsh world. The story highlights how simplicity is sometimes all we seek to be happy. Thana and Popeye’s tenderly paced wander back to Loei prompts an internal growth and changein mindset that could not have happened at any other speed. Matthew James Kelly brings out the nuances of humor in the slice of life scenes with his music, and Chaitawat Thrisansri paints the film with shades of nostalgia through color.

The movie does not fall into a typical template of a road trip film and keeps interest and engagement throughout. Winning the 2017 World Cinema Dramatic Special Jury Award for Screenplay, Tan does indeed create a charmingly sentimental work of art through her writing. Her focus on Popeye and the architecture as important elements of the film, combined with the extraordinary chemistry between Warakulnukroh and Bong, makes a beautiful setup for a uniquely playful, yet lightly dramatic story of growth, regret, and human values. 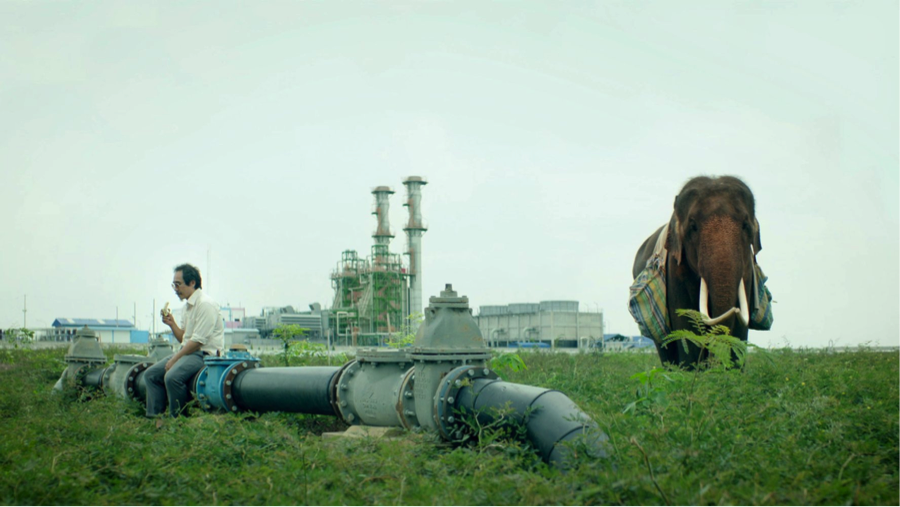 Top Photo: “Thana” (Thaneth Warakulnukroh) on a bridge in Bangkok.

Bottom Photo: “Thana” (Thaneth Warakulnukroh) with “Popeye” (Bong) as they wait for a truck on the roadside.

Yes…but this was a close one.

Even though there is a fair amount in the movie in which characters are not talking about a man, the movie centers around a male protagonist and an elephant. The only female lead is Thana’s wife, Bo, and most of the conversations she has are with him. However, Bo does speak with a lady who comes to clean their apartment and notifies her that she does not need to clean today, that they will arrange another time.