Writer-director Marie Noelle explores the personal struggles of the titular scientist in Marie Curie: The Courage of Knowledge. (GEP: 3.5/5)

Students might remember Marie Curie’s name emboldened on the pages of their textbooks, a flashcard with her moniker on one side and a brief list of accomplishments on the other. “Marie Curie: Polish chemist and physicist; pioneering theory of radioactivity; first woman to receive a Nobel Prize and only woman to receive two.” Her awards and theories would undoubtedly be the answers to one of those dreaded “all of the above” questions our science and history teachers used to baffle us on exams.

Noelle and co-writer Andrea Stoll try to unfold the single-line definition Curie has been reduced to in The Courage of Knowledge, a very unscientific biopic in both structure and plot. Curie’s relationships are the main plot point of the narrative, from her family to her predominantly male colleagues. Her romantic life is also depicted, including  the devastating death of her husband (an especially grim part of the film) and her later affair with married colleague Paul Langevin. 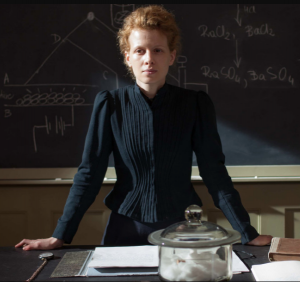 Karolina Gruszka is outstanding in her embodiment of the lead role. As Daniel Day Lewis put a voice to the previously elusive personal life of Abraham Lincoln in Steven Spielberg’s Lincoln, Gruszka does so on a smaller scale. The right actor brought life to this particular historical figure, not only in the lab (where we’re already familiar with her), but in the details of her personality both in the classroom and at home.

When Curie takes over her late husband’s teaching (“a female professor?!” *gasp*), the film finally picks up speed as Curie proves her prowess. Her theories themselves have already been examined in labs and science books – but her motivation as a teacher and mother can only be truly depicted in this form, however slow or unbalanced it might be to watch at times.

While admittedly more compelling than a Biography Channel-style list of her awards and scientific achievements, the more dramatic aspects of Curie’s adult life are somehow complicated and slow all at once. Her life is undoubtedly interesting, but to quote Curie’s sister, “she fights on too many fronts simultaneously,” and so does Noelle and Stoll’s script. The Courage of Knowledge attempts to combine science, female advancement, motherhood and romance. While it’s not entirely seamless, neither was Curie’s life. Our teachers were right – she was all of the above.

Top Photo: The film’s title character won two Nobel Prizes and is known for her theory of radioactivity.

Middle Photo: Curie took over her husband’s teachings after he died.

Bottom Photo: Curie in the lab.

Q: Does Marie Curie: The Courage of Knowledge pass the Bechdel-Wallace test?