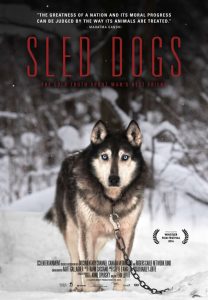 Director Fern Levitt’s 80-minute documentary Sled Dogs is an in-depth look at the dogs who run in Alaska’s annual 1,000-mile Iditarod. The men and women who oversee their breeding, training and care offer commentary and necessary explanation, but the dogs are the stars of the show and will leave viewers divided over the necessity of tradition and sport versus the well-being of the animals. (GEP: 4/5)

“There aren’t many places left in the world where you can see the terrain, the geography and the topography that Alaska presents,” according to the Iditarod’s chief veterinarian Dr. Stuart Nelson in the opening minutes of Sled Dogs, but he’s quick to indicate that “the dogs are the focus of it all.”

The Iditarod is an essential part of Alaskan history. Though a tourist draw and a national spectacle, residents outside of “the 49th state” are probably not aware of the dogs’ background. They are trained from as young as three months old to become exceptional athletes, and Levitt does an excellent job of informing the viewer without throwing out arbitrary facts and statistics. She shows without telling, which is likely not an easy feat when your subjects are furry four-legged friends.

From the dogs themselves and trainers (or “mushers”) to caretakers and spectators, Levitt is quick to expose the tough conditions dogs are sometimes exposed to during the off-season. According to the film’s talking heads, Alaskan tourism makes it appear that the animals are well-trained and well-taken-care-of, but footage shows that it’s not always the case. The documentary does become agenda-driven in its second half, but both sides of the equation are presented in the beginning – from tough disciplinary tactics to even killing animals that can’t run, abuse is evident and unregulated at some kennels. But other mushers claim that they have a special bond with the dogs they raise, like Patrick Beall, who is clearly in awe of the ability of these animals and has created what he calls a symbiotic relationship with his “buddies.”

Though Sled Dogs focuses heavily on abuse, it’s clear the race and its training has become a way of life for these animals and trainers. It’s clearly not worth the sometimes-horrible mistreatment and even merciless killings of some of the animals (according to what Levitt and her Humane Society subjects expose here). Some could argue that it’s unlikely that human Olympic athletes are ever truly comfortable, but they at least make the choice to train, a point emphasized by Dr. Paula Kislak, the board president of the Humane Society Veterinary Medical Association. Who speaks for these dogs? Fern Levitt does, as well as Humane Society experts and witnesses to the atrocities some of the canines face after they’ve served their “purpose” in the Iditarod – an event that has changed drastically and disturbingly over the course of time.

Sled Dogs is an informative, frustrating, fascinating documentary about an aspect of Alaskan culture that viewers in the lower 48 might not understand. It’s sometimes uneven in tone, working to show both loving mushers and appalled bystanders. This takes on a somewhat-bumpy emotional quality, making you wonder why some dogs are supposedly so beloved and enthusiastic while others are beaten, imprisoned in tight cages and even killed once their owners are finished with them as their “property.” Disturbing images of dog carcasses being excavated and examined are a bit much when weighed against black-and-white reels of the Iditarod’s supposedly lauded history. I believe that a lot of these animals are treated unfairly and harmfully, but I also believe in interviewees like Beall, who genuinely seem to love their work and their dogs, which makes for an even more unsettling and unsure viewing experience.

Thankfully the explanation of Alaskan law and the horrifying legality of the dogs’ mistreatment clears up any moral ambiguity and will have viewers wondering why this practice even still occurs. Though lovingly portrayed in the 2006 film Eight Below and used as a comedic tactic in Snow Dogs (2002), it’s clear that these dogs are either brutally abused or truly loved – but without a doubt, another example of human behavior hurting others for sport and spectacle. Middle Photo: According to laws in Alaska and British Columbia, dogs are allowed to be kept in chains for extended periods of time.

Bottom Photo: The annual Iditarod is a 1,000-mile dog run.

Who is Clara Royer?

‘Serendipity’ doc fully immerses viewer into a life with cancer

‘The Spy Who Dumped Me’ cleverly mocks human behavior