Written and directed by Sophie Brooks, The Boy Downstairs is a quirky love story about rekindling with an ex years later. With unlikable characters and a toxic atmosphere, this film misses every opportunity to show true love. (KAC: 2/5)

After living in London for 3 years, “Diana” (Zosia Mamet) returns to New York City to work in a bridal shop while writing her first novel. Immediately, disaster strikes when she moves into the same apartment building as her ex-boyfriend, “Ben” (Matthew Shear). Through flashbacks, we see the origins of their relationship and how Diana’s move to London resulted in their breakup.

Feelings begin to emerge, but Diana soon finds out that Ben lives with his girlfriend, “Meg” (Sarah Ramos), coincidentally also the real estate agent that showed Diana the apartment. Despite Meg’s concerns, Diana swears she doesn’t have feelings for Ben. And while she wants to be just friends, Ben makes it clear that friendship isn’t an option for them.

Diana reaffirms her relationship with her best friend, “Gabby” (Diana Irvine), and becomes friends with the building’s owner, “Amy” (Deirdre O’Connell). Quickly, Diana realizes the difficulties of relationships as she watches Gabby struggle to meet a guy who wants to do more than just have sex, and Amy struggle to move on from the death of her husband.

After running into Ben a few times, Diana recognizes her true feelings for him, while reflecting upon how things fell apart in the past. With encouragement from Amy and Gabby, Diana comes to terms with the possibility of beginning again, but neither Diana nor Ben know if rekindling their relationship is the right thing to do.

Despite a dynamic, passionate story, this film fails to create a true love story. Diana and Ben are both unlikeable characters who have little regard for those around them. Throughout the story, Diana is framed as a ‘quirky’ girl who makes inappropriate jokes in every situation. No one seems to get her until Ben comes along and matches her banter. While their conversations are well-written, the content is bland and unnecessary.

The supporting characters are wonderful in thought, but are somehow stretched into two-dimensional characters. Gabby is driven by her lust for a guy, but of course he only wants sex, while she hopes for something more. She’s heartbroken and most of her dialogue revolves around Diana and Ben or her own failed relationship. After her husband’s death a few years prior, Amy gives up on acting and finds herself being a landlord full time. She strives to be young again, going so far as to kick the old people out of her building and only rent to younger tenants.

Meg is treated the worst of all. Immediately set up as Diana’s competition, the two women constantly go back and forth over Ben, a lackluster prize. Meg is monotone and bitchy. She questions Diana about her obvious feelings for Ben only to be told that she’s imagining things. During the whole film, I was left rooting for Meg to get what she deserves, and find someone better than Ben.

The Boy Downstairs written and directed by Sophie Brooks is aptly titled. All about Diana’s fascination with Ben, who is allowed to act like a child, this film had the potential to be a great story about the ups and downs of relationships. Sadly, it failed in almost every respect leaving us with two people that shouldn’t be together. 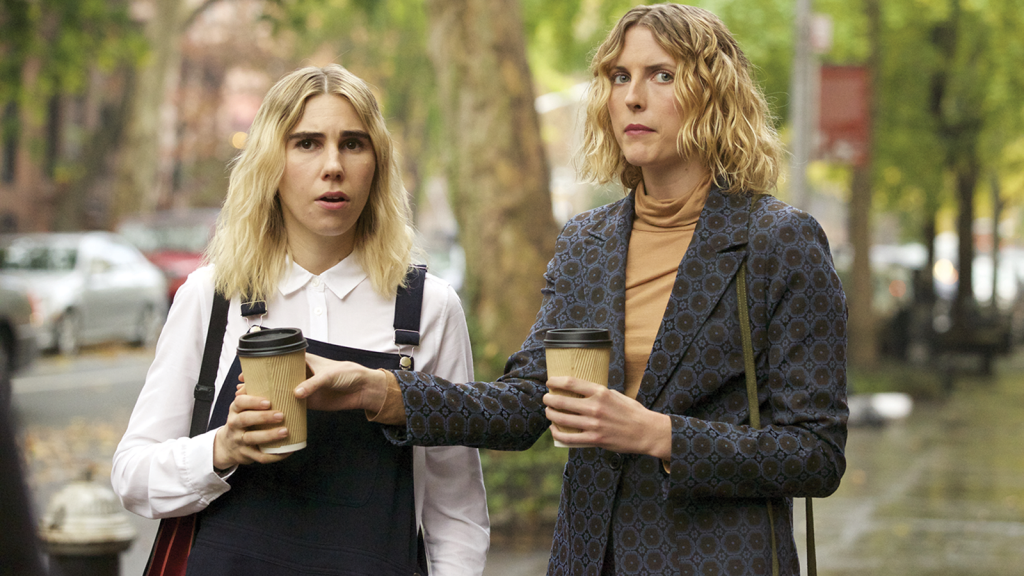 Top Photo: Diana and Ben on their first date.

Bottom Photo: Diana and Gabby walking through the city.

Q: Does The Boy Downstairs pass the Bechdel-Wallace Test?

Diana and Gabby talk about her moving back to New York, Diana and an editor have a conversation about her unfinished novel, and Diana and Amy talk about Amy’s acting career, the apartment, and Diana’s work in the bridal shop.

It’s hard to like two main characters that are toxic for each other. Ben is extremely manipulative, and Diana is blatantly selfish. After dumping Meg then having dinner with Diana, Ben kisses Diana outside her apartment. She hesitates, realizing that he just got out of a serious relationship and wants to take things slow. Ben immediately responds with “You flirt with me, you know?” as if her flirtations means she owes him something.

Some scenes play more as what not to have in a relationship than reasons to rekindle one. Their relationship is emotionally abusive, but the film plays it off as confusion, and dismisses the fact that it’s a toxic relationship. The longer the movie went on, the less I was rooting for them to be together.

These two characters are also wholly defined by their relationship with one another. We find out that Diana is an aspiring writer, but besides a few shots of her on her computer and a meeting with an editor, her profession doesn’t matter to the plot at all. Ben wants to do ‘something in music,’ but we never find out what that means.

Their work should exist alongside their relationship. Especially because it had a major effect on why they first broke up, their lives outside each other are extremely important. I was constantly waiting for them to stop joking around and actually talk about their lives apart from each other. People exist outside their significant other and it’s disappointing to see them framed around their feelings for one person.