Directed by Greg Campbell and co-written with Jenny Golden, Hondros is a moving documentary about the late war photographer Chris Hondros. By exploring the field through his body of work and anecdotes from his friends and family, this film brings up questions about the field and the impact of Hondros’ life. (KAC: 4/5) 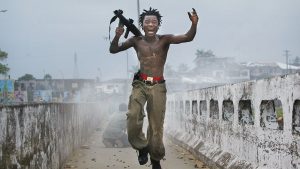 Hondros is an examination of the life and work of one of the most successful war photographers in the last 30 years. Chris Hondros was a gifted photographer with an amazing personality, shown in this film through interviews with his mother, his colleagues, his friends, and even some of his subjects. Made by his childhood friend and a fellow journalist, Greg Campbell, this film evaluates his life from his start in the field of photography up until his death in Libya in 2011.

Despite the closeness of the subject matter, Greg Campbell and Jenny Golden use this documentary as a way to explore issues with war photography, from the fame it brings to the impact of war. Through interviews with many of Chris’s most famous subjects, they expose the dangers and benefits that being a subject of a famous photo can cause. The filmmakers don’t hold back to show the negative effect that Hondros brought upon some of his subjects, even when he had the best intentions.

Alongside the issue of fame, the film investigates the impact of war on all subjects involved. Many of Chris’s colleagues recount stories of being kidnapped and beaten while working in the field. Alongside seeing horrific violence and death, the photographers often put their own lives at extreme risk. Even if they make it out of one conflict alive, they often suffer psychologically. Similarly, the subjects of the photographs, from soldiers to civilians, suffer immensely as well.

Although it tackles some complex problems in the field, the film fails to truly encapsulate Chris’s personal life. His fiancee, who he planned to marry a few months after his sudden death, appears once in the film and makes little impact. It’s unclear why the filmmakers decided that her input was less relevant than that of his friends and colleagues, or if she did not want to be further included.

Either way, many of the other war photographers and journalists interviewed and heavily featured in the film are male, with the few women given much less of a voice. In addition, the singular female subject of one of his photos that is interviewed isn’t treated with as much respect as her male counterparts. It’s important to note that Hondros’ photo of her and her family put her life at risk and got her brother killed, due to its fame. Unlike some of the male subjects, Hondros didn’t keep up with her or help her in any way after his photo of her became famous. She is, of course, unappreciative of the photograph and seems to be treated differently because of that.

In Hondros, directed by Greg Campbell and co-written with Jenny Golden, the impact of a photograph is analyzed through the lens of Chris Hondros’ life and body of work. The documentary is emotional and well put together, exploring more themes than first expected. Despite its new and dynamic perspective on the field and Hondros’ life, this film fails to include women that were important in Hondros’ life and career, with the exception of his mother.

Note: This film gives a special thanks to Harvey Weinstein. 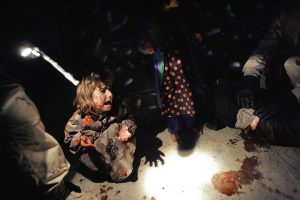 Top Photo: Chris Hondros and other photographers hiding from bullets during the Liberian Civil War in 2003.

Middle Photo: Hondros’ most famous photo from the Liberian Civil War in 2003. The subject is interviewed in the documentary.

Bottom Photo: Another famous Hondros photo from Tal Afar, Iraq in 2005. The subject is interviewed in the documentary.

Q: Does  pass the Bechdel-Wallace Test?

This film is about a male war photographer, so all conversations revolve around his life or his photographs. There are few women in the film at all, less than a handful of other journalists and photographers, a subject, his fiancee, and his mother.

Film Review: HEIR TO AN EXECUTION