Co-written by Kira Snyder and Emily Carmichael among other writers, Pacific Rim: Uprising, set ten years after the original 2013 film, continues the story of the Jaegers’ fight against the Kaiju. Former hero Stacker’s son Jake (John Boyega), newly employed at a Jaeger base to train young cadets, finds that his efforts to stay out of the Jaeger fighting world will inevitably fail as personal and otherworldly threats press in. Pacific Rim: Uprising has memorable characters and a satisfyingly complex story, and for lovers of action, it comes highly recommended. (AEL: 3.5/5)

In the Pacific Rimworld first built for the 2013 movie, huge anthropomorphic airships, called Jaegers, serve as military weapons. They make for an unexpectedly good action movie premise, since pilots control them with their own physical and mental strength. Each Jaeger requires a pair of pilots, and strong and safe fighting requires the pilots to maintain an intimate mind connection, called “Drifting.” In the last film, fighters defeated malevolent Kaiju creatures and banished them back to their world.

Previous hero Stacker Pentecost (played by Idris Elba in the 2013 film) has been succeeded by his jaded son Jake (John Boyega). As punishment for Jake’s criminal dealings, Jake’s sister Mako (Rinko Kikuchi) has banished him to a Jaeger base in Hong Kong, where he’ll be training young cadets to atone for his bad behavior.

Old problems haunt Jake as he starts work at the Jaeger base. He and his former co-pilot, Nate (Scott Eastwood), once able to Drift well together, now can’t seem to get along. Their competing romantic tensions with another new pilot, Jules (Adria Arjona), threaten to bring old bad feelings out into the open. When Jake and Nate are deployed together in Sydney, Australia, a rogue Jaeger launches a surprise attack on the city. Jake and Nate overcome their friendship struggles and Drift together smoothly enough to defeat the attacker, but the victory isn’t without casualties. Jake’s sister, Mako, is killed in the attack. 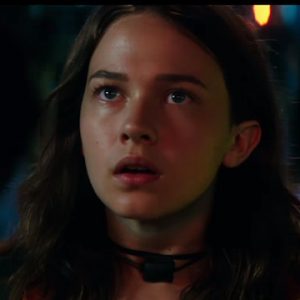 One of the new cadet trainees, Amara (Cailee Spaeny), is incredibly self-possessed and capable despite her young age, but Drifting doesn’t come as easily to her as it does to the others. When she tries Drifting with Jake, she is overwhelmed by traumatic memories of when her entire family was killed by Kaiju right in front of her. As training continues, Amara’s curiosity and stubborn bravery start to get her into trouble, and her future as a Jaeger pilot is at risk.

Meanwhile, a private company, Shao Corporations, has been creating a fleet of drone Jaegers, and soon they’ll be deployed around the world. Before Mako died, she warned that these drones could be dangerous, as they are powerful and easily hijacked by malevolent forces. As more rogue Jaegers launch mysterious attacks on Jake and his co-pilots, it becomes increasingly clear that Mako’s warning was prescient, and that the Kaiju world is not as far off as the pilots had thought.

Pacific Rim: Uprising was among the most enjoyable action movies I’ve seen. Its characters are developed, and the dynamics between them are not two-dimensionally romantic or competitive. They have pasts and insecurities that haunt them. They’re heroes I want to root for.

For any film genre, I care about story, and Pacific Rim: Uprising is a good one. Its twists are sometimes almost comically dramatic and its action can feel like a video game, but that’s the fun. Pacific Rimis also a video game after all, published apparently in conjunction with the 2013 movie. The forces of “good” and “evil” are uncomplicated¾in the video game, you can choose to fight as a good Jaeger or an evil Kaiju¾but in the 2018 film, the story adds a bit of satisfying complexity. It’s not always clear exactly who is good and who is evil, nor is it clear who among the “good” ones are most equipped to defend the world. 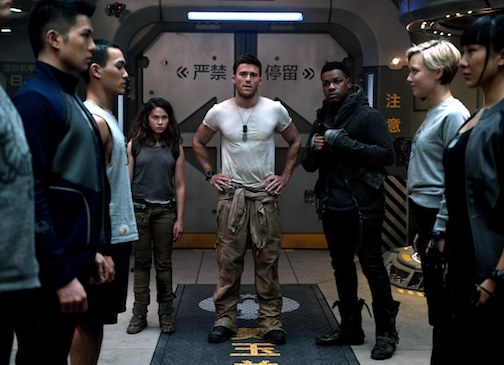 Middle Photo: Amara (Cailee Spaeny) readies herself for a fight.

Women characters have essential positions in every area in this story: they are pilots, cadets, and military leaders, and the C.E.O. of the Shao Corporation is a woman (an Asian woman, might I add). The evolving competitive relationship between cadets Amara and Viktoria (Ivanna Sakhno), displaying their very different approaches to a normally male-dominated military world, is perhaps my favorite.