‘The Devil’s Doorway’ leads priests to question sins and secrets

Aislinn Clarke directs and co-writes a chilling horror movie set inside a haunted house in Ireland. “The Devil’s Doorway” is presented through the eyes of two priests, sent by the Vatican, who conduct an investigation into a miraculous occurrence at the dwelling. But the excitement and skepticism of the pair soon turns into fear, as their search for the truth uncovers layer upon layer of unexplainable events. Getting more than what they bargained for, their assigned investigation reveals the dark and ugly secrets at this home for “fallen women”. (KIZJ: 4/5)

A spot of light frantically wanders along the walls of a rocky tunnel, and “Father John’s” (Ciaran Flynn) frightened voice is heard shouting for “Father Thomas” (Lalor Roddy). Rewind a short period back in time, and it is October of 1960. An anonymous claim was filed about a statue at a laundry near the Vatican that weeps tears of blood. The two priests were sent immediately to look into the matter and document their entire stay on camera.

Young Father John, is filled with excitement about being able to witness this phenomena, whereas older Father Thomas doubts this is anything more than simple trickery. The duo begins their investigation by questioning “Reverend Mother” (Helena Bereen), who denies all accusations of strange occurrences as heresy. This only reaffirms Father Thomas’ commitment to getting to the bottom of this matter. When he asks for a list of all the people who live at the house, including all the children, Reverend Mother states loud and clear that there are no children here. But soon Father John becomes convinced otherwise. 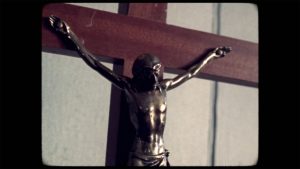 On multiple occasions the young Father is woken during the night by sounds of children laughing. Yet when he takes out the camera, he is unable to capture any solid evidence—only some vague sounds are recorded. When he brings this up to his investigative partner, Father Thomas explains that such miracles do not exist. The latter priest continues to calmly scrape bits of dry red stains from the statue’s eyes into test tubes, convinced that there is an explanation—or a trickster—behind all that has been happening. Yet, something does not sit right at this house: there is a hierarchy of Nuns, mistreated “fallen” women, child ghosts, and bleeding statues. As Father John explores around the house with his camera, secrets of the house unfold one by one, each more troubling and sickening than the previous.

Aislinn Clarke’s “The Devil’s Doorway” is a technically well-executed, and directed film shot with a unique framing. However, the story doesn’t delve as deep in terms of character development. Instead, it stages one fright after the other, which feels a bit repetitive after the midway point. However, as a movie of the horror genre, it definitely scores high on the scare-factor. I watched multiple parts through my fingers, despite being able to predict where the jumps would occur.

The entire cast does a very convincing job and acts at a very high standard with stand out performances from Helena Bereen as the icy, devilish Mother Superior, and Lalor Roddy as Father Thomas. I cannot speak highly enough of Roddy’s performance; he delivers each of his lines with introspection and magnetism, making me grow more and more attached. Although the story’s pacing could do with some adjustments, it has its intriguing moments of disgust, sensitivity, and many scares. Overall a very well put together horror from Clarke. 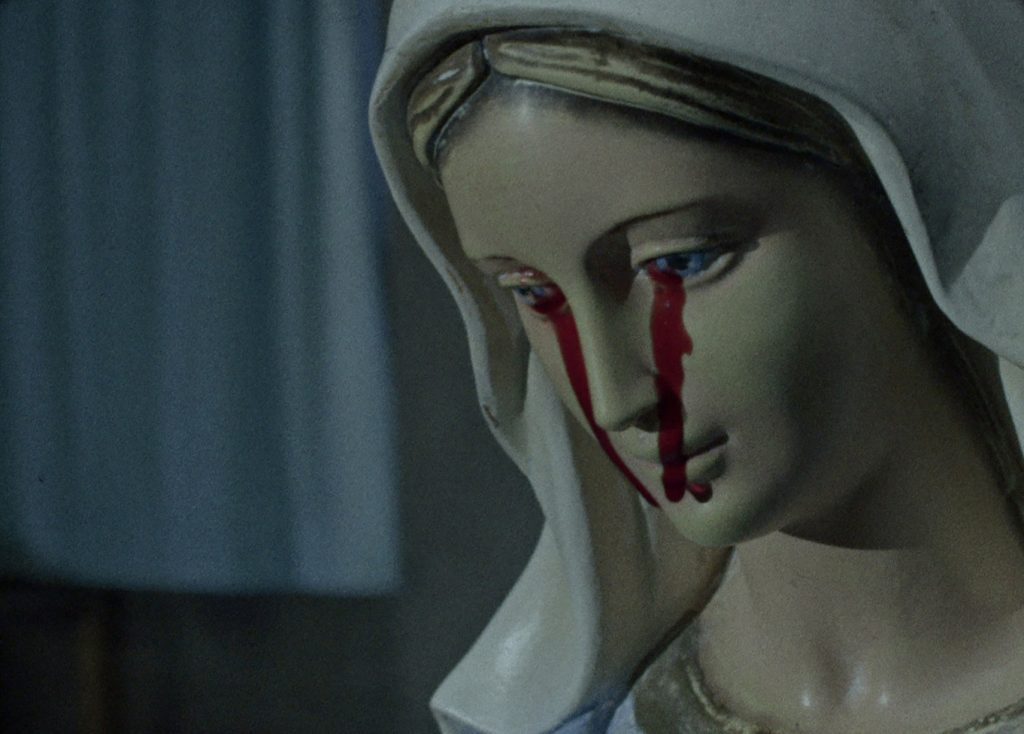 Middle Photo: One of the prop statues.

Q: Does The Devil’s Doorway pass the Bechdel-Wallace test?

The Reverend Mother punishes a girl for talking to Camera John with the camera.